Hope you all had wonderful, turkey-stuffing-cranberry sauce-filled holiday weekend. Here are 10-ish stories for your water cooler conversations: 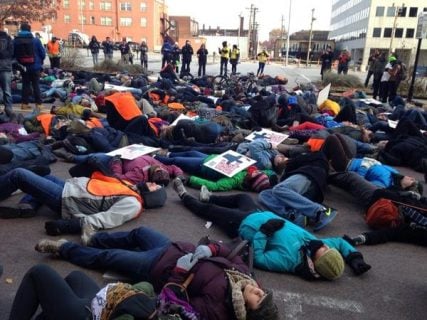 Clergy lay on the ground in Clayton, Mo., the morning after unrest on Monday night in response to the announcement that officer Daren Wilson will not be indicted.

Many churches urged healing and activism after last week’s decision in Ferguson to not indict the police officer who shot Michael Brown. Attorney General Eric Holder will speak tonight at Ebenezer Baptist Church in Atlanta at a race relations discussion in the wake of Ferguson. Two Florida Baptist churches merge with the hopes of bridging a racial divide.

Pope Francis made some news over the holiday weekend. He prayed in a mosque in Turkey, he demanded the end to ISIS attacks. He also said he is ready to meet with the leader of the Russian Orthodox Church leader but doubt theologians from the two sides find a way to heal a 1,000-year-old schism. Then there was this photo:

Bartholomew blesses Francis and the "Church of Rome." Both affirm desire for Christian unity. https://t.co/b0S6AvXcKg pic.twitter.com/RfPbt22qF6

In the upcoming epic “Exodus,” God appears to Moses as a fierce child.

If you were to buy the items from “The 12 Days of Christmas,” it would cost more than $116,000 this year. Counting down to Christmas? Here are 12 Advent calendars, from brilliant to bizarre to totally commercial.

More than 100 people were killed during a bombing of a mosque in Nigeria.

Finally, today is World AIDS Day. Here’s what HIV can teach us about fighting Ebola.