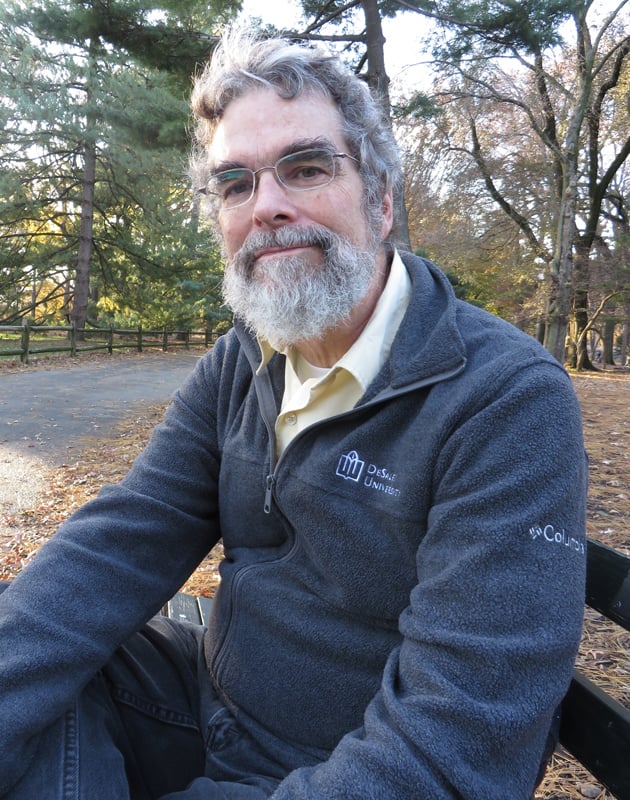 Brother Guy Consolmagno, an astronomer and head of the Vatican Observatory Foundation — and co-author with another Jesuit of a new book, “Would You Baptize an Extraterrestrial?” — pondered faith, science and the fate of universe during an unseasonably warm November day in Central Park. Religion News Service photo by David Gibson

NEW YORK (RNS) With Christmas just around the corner, Brother Guy Consolmagno gets a lot of questions this time of year about the star of Bethlehem that led the Magi to Jesus in the manger.

Consolmagno is an astronomer — a planetary scientist for the Vatican observatory, in fact — who specializes in asteroids and meteorites, the very sort that may well have been the famous “star” described in the Gospel of Matthew.

“It’s fun speculation,” Consolmagno said, smiling though a graying beard while sitting on a bench in Central Park on an unseasonably warm afternoon. “It’s fascinating to realize that there actually are a couple of quite plausible things it could be.

If those are the sort of musings you enjoy, and a level of ambiguity you can handle, then you will like the new book that Consolmagno has written with his fellow Jesuit, the Rev. Paul Mueller, who heads the Jesuit community at Castel Gandolfo, a hilltop town near Rome where the Vatican’s main telescope is located. (The other is on a mountaintop near Tucson, Ariz.) 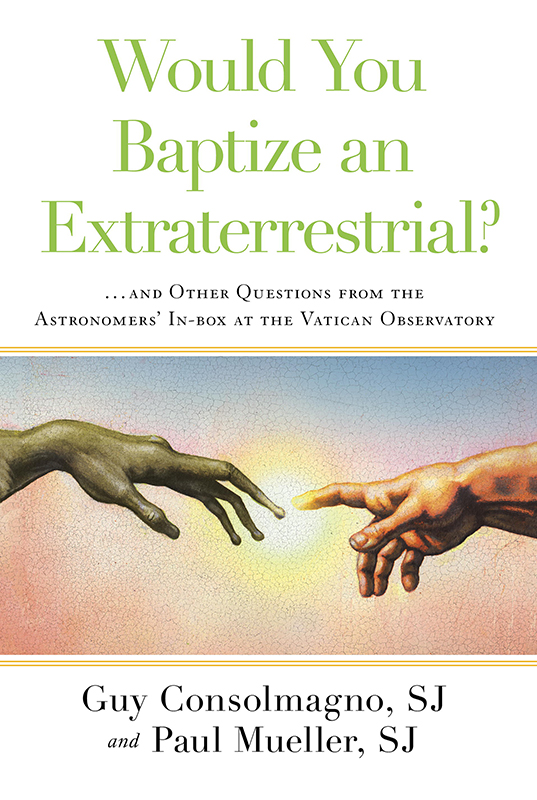 “Would You Baptize an Extraterrestrial?” by Guy Consolmagno and Paul Mueller. Photo courtesy of Image Books

Their book is titled “Would You Baptize an Extraterrestrial?” another question that Consolmagno is asked a lot in his many speeches and media appearances, and one that Pope Francis — a fellow Jesuit and a trained chemist — has posed as part of his focus on Catholic inclusivity.

Consolmagno’s short answer is “yes.“ But “only if she asks!”

While the longer answer is spelled out in the book, the two Jesuits are really aiming their lens at a bigger goal: to show how people of faith can also believe in science.

“God is reason. If you reject reason, you are rejecting God,” Consolmagno said.

Unlike many apologists, Consolmagno isn’t fixated on the so-called “New Atheists” like Richard Dawkins who wield science like a cudgel to bash religion, and believers.

“I don’t mind someone disagreeing with my views on religion,” he said. “But I’d like to have a sense of mutual respect. If you think that what a lot of people believe is nonsense, then maybe you don’t understand what it is they believe.”

But such debates are mostly a sideline for Consolmagno.

“The thing that really bothers me,” he said, “is the creeping fundamentalism among Catholics who don’t know their own faith and who are desperately trying to do the right thing and to be faithful believers, thinking that they have to sacrifice their reason to follow God. And that is exactly the opposite of what God wants.”

Preaching that old-time Catholicism of faith and reason is what Consolmagno will now be doing almost full time. For two decades, he was curator of the Vatican meteorite collection in Castel Gandolfo, one of the largest in the world, and he wrote scientific books and delivered research papers. Last month, he was given the Carl Sagan Medal, one of the most prestigious awards within planetary science.

Yet Consolmagno has always seen himself as a teacher as much as a researcher, and now he will be able to educate people even as he raises money in his new post as head of the Vatican Observatory Foundation. Instead of living in Italy, he will be based in Arizona and will travel much of the year.

The goal is to make the church and the public more aware of the scientific work the Vatican does  — who even knows that the pope has an observatory, and why? It’s also to teach Catholics about their own intellectual tradition.

While Consolmagno happily describes himself as an introvert — “pretty much a nerd,” is how he also puts it — he says that it’s easier for him to talk to 2,000 people than it is to deal with individuals.

Indeed, that’s why he became a Jesuit brother rather than a priest who might have to look after a parish. Born in 1952 in a well-to-do suburb of Detroit, Consolmagno’s immigrant family placed a high value on education and faith. He loved science as a kid and, like many in those days, his imagination was fired by the space race in the 1960s and the moon landing — the kind of efforts he believes we need to invest in today.

Space travel “is the one thing that draws us all together,” he said, noting that both the Vatican and the U.S. government spend about 1 percent of their budget on astronomy-related science.

“This kind of curiosity transcends momentary human conflicts and gives us a sense of perspective,” he said.

Consolmagno continues to be a sci-fi buff, though he prefers old-school books to movies. He did, however, love the recent space epic “Interstellar,” watching it in an IMAX theater with a high school buddy and a chum from MIT. The science was pretty good, he thought, and not even central to the film: “The word religion is never mentioned because it’s everywhere. It is entirely about dealing with the transcendent.”

Consolmagno started out at Jesuit-run Boston College yet soon decided he didn’t want to be a Jesuit. “I realized I’m much better at dealing with numbers and factoids,” he says. So he transferred to MIT and was pondering academic stardom in planetary science when his Catholic conscience called again; he joined the Peace Corps, working for two years in Kenya teaching physics and astronomy.

“People in Africa are curious about the stars, too,” he said. “If you deny them the chance to go ‘Wow!’ looking at stars, you are saying they’re not fully human. They are hungry for that because human beings are hungry for that.”

When he returned to the U.S. he found a satisfying teaching job at Lafayette College in Pennsylvania, yet it wasn’t enough. He wanted, needed, to “stand for something bigger than myself.”

Consolmagno had just ended a long and rocky relationship and realized he was better on his own. So his old Jesuit calling beckoned, only this time as a brother, and by 1993 he found himself a fully vowed Jesuit, in Italy, and working for the Vatican. He wasn’t teaching, but it wasn’t a bad gig, to say the least.

Now, in his new incarnation, he hopes to be able to use what spare time he has for research, especially into the asteroid Vesta, which he wrote about years ago. He’ll put the popular books on hold for a while, though he still hopes to test that hypothesis about baptizing an extraterrestrial.

But his main job is to ease the fears of fellow believers who worry that science undermines faith.

“If there wasn’t a God,” he said, “why would I be so worried about there not being one?”