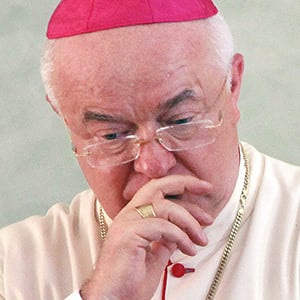 Jozef Wesolowski is pictured during a 2011 ceremony in Santo Domingo when he was still an archbishop and was serving as nuncio to the Dominican Republic. The Vatican’s Congregation for the Doctrine of the Faith found the archbishop guilty of sexual abuse of minors and has ordered that he be laicized.
December 3, 2014
Josephine McKenna

VATICAN CITY (RNS) Pope Francis told authorities from the Dominican Republic that the "truth" must prevail in the investigation of a former Vatican ambassador who was convicted and defrocked for abusing teenage boys in the Caribbean country. 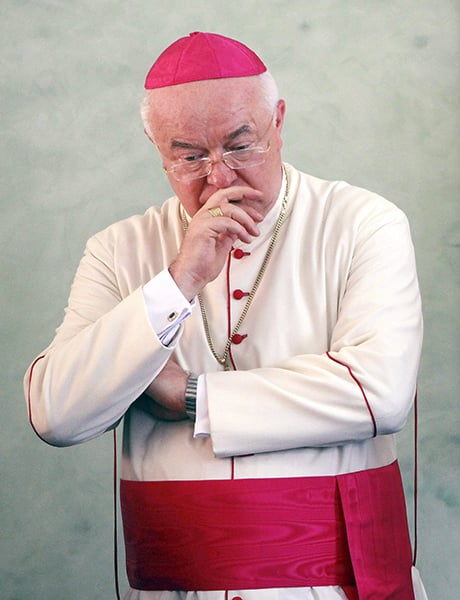 Jozef Wesolowski is pictured during a 2011 ceremony in Santo Domingo when he was still an archbishop and was serving as nuncio to the Dominican Republic. The Vatican's Congregation for the Doctrine of the Faith found the archbishop guilty of sexual abuse of minors and has ordered that he be laicized.

Francis met with the Dominican Republic's chief prosecutor, Francisco Dominguez Brito, after his general audience at the Vatican on Wednesday (Dec. 3) to discuss the case against former Archbishop Jozef Wesolowski, who was defrocked by the Vatican in June.

In a statement -- also referred to on Vatican Radio -- Dominguez Brito quoted Francis as stressing the need for "truth" in the case.

On Tuesday, Dominguez Brito met with the Vatican's top criminal prosecutor, Gian Piero Milano, and other Vatican officials to discuss the case after a visit to Wesolowski's native Poland.

Wesolowski is the most senior Catholic official to be convicted by a Vatican body of sexually abusing minors. The 66-year-old nuncio, who was the Vatican’s ambassador to the Dominican Republic from 2008 to 2013, was recalled from his post last year and found guilty of sexual abuse by the Vatican’s Congregation for the Doctrine of the Faith. He may face criminal charges.

After his first court appearance, Wesolowski was placed under house arrest inside Vatican City pending a decision by the Vatican criminal court on whether to indict him. But the Vatican’s chief spokesman, the Rev. Federico Lombardi, said the house arrest restrictions had been eased due to health concerns and because the time limit for his remand had expired.

“Wesołowski has been given some freedom of movement, but only within Vatican City and he is still limited in his communication with people outside (the walls of the Vatican),” Lombardi said.

Lombardi said the meeting between the legal officials was part of “international cooperation” and evidence gathering on the former archbishop’s activities. Wesolowski has recently been questioned by Vatican prosecutors and would be questioned again in the future, he said.

The Vatican has given the media no information about what crimes Wesolowski was convicted of, where or when the offenses took place or how many minors were involved.

Dominican prosecutors have previously said they had convincing evidence that the prelate molested young men there and he has also been accused of abuse in his native Poland.

The Vatican previously rejected a request from the Warsaw prosecutor’s office for Wesolowski’s extradition on the grounds he was “a citizen of the Vatican.”