“Some of you have asked me if the synod fathers fought,” Francis said. “I don’t know if they ‘fought,’ but they spoke forcefully. This is freedom. This is just the kind of freedom that there is in the church.” 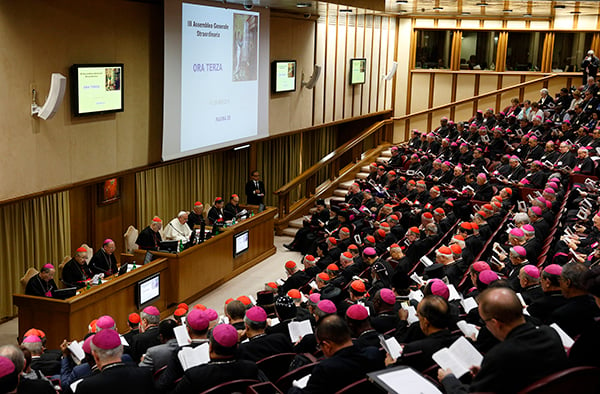 Pope Francis and prelates attend the morning session of the extraordinary Synod of Bishops on the family at the Vatican on Oct. 9, 2014. Photo by Paul Haring, courtesy of Catholic News Service

In a bid to set the record straight, the pope acknowledged the extensive media coverage of the global gathering in October and likened it to “sports or political coverage.”

“They often spoke of two teams, pro and con, conservatives and liberals,” the pope told thousands of pilgrims in St. Peter’s Square.
“There was no clash between factions … but a dialogue between the bishops, which came after a long process of preparation and now continues, for the good of the family, the church and society. It’s a process.”

Francis said he encouraged synod participants to speak frankly and to listen with humility. He also stressed there was no prior censorship.

“Cardinal Walter Kasper was suggesting new ways of responding to divorced and remarried people while others strongly opposed this,” he said.

Reese added that the pope was right to point out that many bishops took a middle-of-the-road approach, wanting to strike a pastoral tone, but afraid of doing anything that may appear contrary to church doctrine.

But the discussions were volatile.

“This was very different from synods under John Paul and Benedict where everyone knew that certain topics and views were off the table,” said Reese.

“Rather than advising the pope, these earlier synods often simply quoted the pope to himself. They were a way of bishops showing their loyalty. Francis gave the bishops freedom to speak.”

On Tuesday, the Vatican released a draft survey based on the final report of the synod to be sent to Vatican departments and bishops conferences around the world for feedback ahead of next year’s synod.

The survey includes 46 questions on key issues affecting the family and hot-button topics such as abortion, divorce and homosexuality.