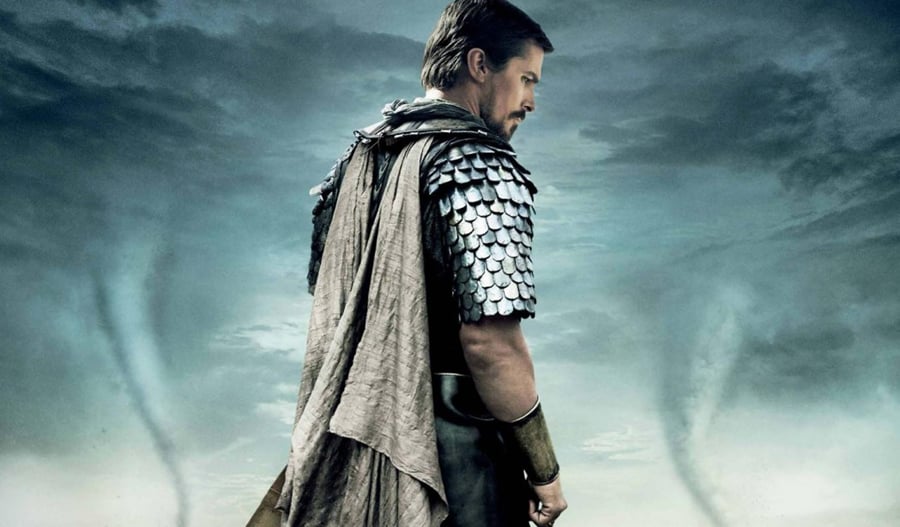 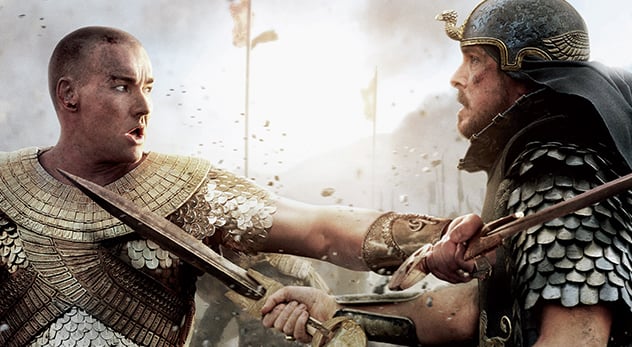 Ridley Scott's epic film deviates from the biblical narrative in at least these 10 places. - Image courtesy of 20th Century Fox.

Polls have shown that religious audiences care a lot about whether a Bible film is "biblically accurate." This is a difficult phrase to use when one is talking about taking a story from one medium (literature) to another (film), but I understand the sentiment. Religious moviegoers want the film to be recognizable or to "feel" like the story as they know it.

"Exodus" has now been in theaters for a week, and many religious bloggers have pointed to the ways in which the film deviates from the text. Now I'm no purist when it comes to Bible films, and I appreciate meaningful artistic flourishes. But I have still compiled a compendium of where the film fails to get the story straight. Readers can judge whether they believe the error is problematic or not.

1. Moses: Orator or Stammerer?
The bible describes Moses as ineloquent and “slow of speech and tongue.” But in the movie, he is a courageous and capable communicator. He even gives a rousing speech as the sea parts reminiscent of Braveheart.

2. Fleeing For The Wrong Reason
In the biblical narrative, Moses murders an Egyptian who is beating a Hebrew slave and hides the corpse in the sand. In the movie, he kills an Egyptian for no reason and leaves the corpse in the street. In the biblical narrative, Moses flees Egypt when his murderous act becomes known. In the film, he flees when Pharaoh suspicions that he may have been born a Hebrew.

3. Boy, Not Bush
In the Bible, Moses sees a burning bush and, when he investigates, God speaks from within the bush. The film opts instead for a scene that depicts God in a somewhat schizophrenic way. Moses wakes from a terrible accident to see a bush mysteriously on fire and next to it is a young boy who speaks as if God. Director Ridley Scott told me that the boy is “Malak” or a “messenger” of God rather than the Almighty. But the boy uses the famous “I Am” line to take on the divine name, so religious audiences will be excused for their confusion.

4. A Society in Self-Tanner
There has been much hullabaloo over the film's race problem—that is, there are almost no people of color in the film except in some smaller roles. Instead, we get a cast of white Western actors playing a society of people who would undeniably have had dark skin. Sigourney Weaver—hold your laughter—plays a African queen.

5. Prince of Egypt Mythology
There is some extra-biblical mythology that has emerged in some modern retellings of Exodus in which Moses grows up as Pharaoh’s son and the brother of the future Pharaoh. This allows for a sub-narrative of sibling rivalry that spices up the story. Bu there is little biblical support for such a thing. In actuality, the text says Moses grew up as the son of Pharaoh’s daughter or Pharaoh’s grandson. The man cast as Moses brother--the original Pharaoh's son--in the film would likely have been Moses’ uncle. Regardless, there is no mention of anything resembling “sibling rivalry” in the text itself.

6. Jewish Freedom-Fighters
The Bible casts Moses as a messenger who lets God handle the destruction. The film casts him as something of a violent liberator that trains the Hebrew slaves to fight like Kevin Costner in Robin Hood: Prince of Thieves. His protégés end up burning fields and killing sailors, waging a war of attrition. A scene where he leads a band of guerrilla fighters to blow up an Egyptian storehouse is especially odd.

7. A Staffing Problem
The staff of Moses is not just folklore. It is a prominent part of the biblical narrative. But Moses’ iconic staff is absent in the film. Instead, he wields an Egyptian sword, which plays a central role in the sea-parting miracle.

8. Only Two Announcements
In the Bible, Moses and Aaron announce or administer each of the plagues before Pharaoh. In the film, Moses has a nighttime encounter with Pharaoh before the first plague and offers a vague warning before the last. How do they know that God may be behind it all? A mysterious horse shows up with the message painted on its ribcage. Seriously.

9. The Crocodile Plague (and the seven, err, eight others)
In the Bible narrative, God uses Aaron to transform the Nile by stretching his rod over the waters. In the film, this never happens. Instead, hundreds of crocodiles seem to go insane. In a violent frenzy they kill themselves and others and their blood turns the Nile red. Also, the film depicts eight or nine plagues, depending on what you count. Ten plagues are mentioned in the Bible.

10. Pharaoh Survives
In the Bible, God says that victory will be obtained “through Pharaoh, his chariots and his horsemen” being destroyed in the sea. After the miracle, the text says that “not one of [the Egyptians] survived.” But in the film, Pharaoh somehow survives the crushing weight of the water wall. Who knows…maybe Scott is setting us up for an epic extra-biblical sequel.

Did I miss any? If so, add them below in the comment section.