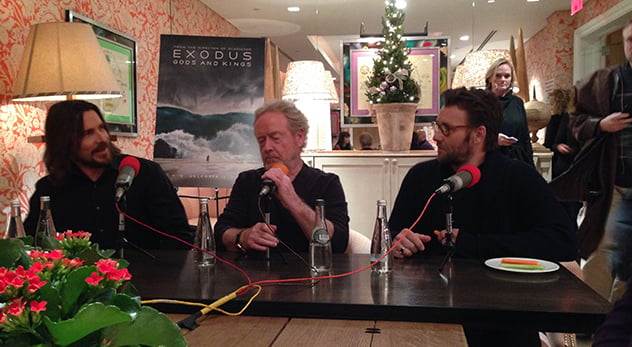 Q: Why did you use a child for the figure of God?

Ridley Scott: Not figure of God. “Malak” means messenger. So “Malak,” to begin with, is the messenger of God. If you’re going to represent God in many shapes and forms, which He will appear, the biggest form of all is probably nature. That’s his power, that’s his base, that’s his beauty, that’s his threat. And occasionally when you want to communicate with someone, it’s very easy with His power to chose a messenger. Or some more popular word might be “angel.” But I didn’t like the idea of an angel associated with wings. I wanted everything to be reality based….

If you’re watching very closely you notice that whenever [Moses and Malak] are witnessed from a distance–Joshua does a lot of sneaking up over rocks and looking to see what’s going on–he can’t see anything. [Joshua] just thinks his leader has lost his mind ’cause he can’t see anything. When you’re in close you can see who Moses is talking to. Of course, when you think of it horizontally or vertically, whichever is the best way, [Moses] also could be talking to his conscience. So Malak could also be his conscience.

Christian Bale: How would you have represented God, if you were in Ridley’s position? ‘Cause it is very easy to pick apart someone’s choice for a depiction of God, you know, but if you’re actually in Ridley’s shoes, it’s an immensely difficult thing. How on earth do you do that?

Q: Ridley, you have something in common with many film makers, which is that you yourself don’t identify as a believer…I wonder if you’d be willing to speak to the challenges and the interest of engaging in this subject matter from the perspective of standing outside of it.

Scott: The writer I chose to finally polish it said, “You couldn’t have asked a worse person to do this because I am a dyed in the wool atheist. I simply don’t believe in this stuff.” I said, “Well, on the contrary, it’s a bit like being in science fiction. ‘Cause I never believed in it, I had to convince myself every step of the way as to what did make sense and what didn’t make sense and where I could reject and accept. And therefore I had to come to my own decisions and internal debates.” 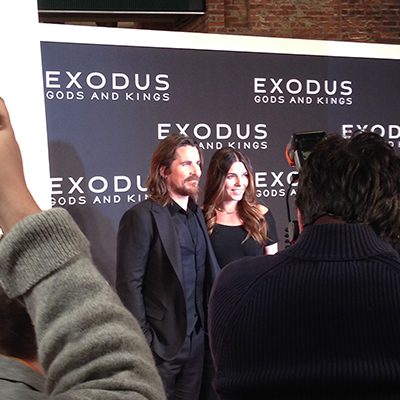 Q: Christian, you’ve talked about Moses as a freedom fighter who may be perceived as a terrorist who we may be tempted to send drones after today…I’m interested in hearing you talk more about that.

Bale: He was a freedom fighter and the Egyptian empire would have considered him, no doubt, a terrorist. They certainly would have attempted to discredit him as such. And then just talking hypothetically, if the Egyptian empire had the technology we have today, they wouldn’t have sent chariots; they would have sent drones. It was a fairly shallow comment really. But the thing that I did find so fascinating with Moses, with complete respect to the other portrayals and films I’ve seen, was when I read the Torah…that it is incredibly fascinating and that Moses is perhaps the most intriguing I’ve ever come across…He encompasses virtually every single human emotion known to man. He is heroic and strong. He is a liberator. He is a leader. He wrestles with God, disagrees with Him very often…

Q: Moses and the other characters were incredibly relatable and I found myself thinking, “That could be me if I were in that situation”…

Bale: Regardless of whatever modern thinking there is about the historical veracity of the Exodus or of Moses himself and Israeli archaeologists’ opinions, [tweetable]we chose to play it as if it were historically true.[/tweetable] ‘Cause otherwise you end up portraying the characters rather like a fairy tale and then they can never be relatable in that case.

Scott: I think “Noah” has a more trickier story to tell. When you take into account the reality and feasibility of those “rock men,” which really should be part of the hobbits. I’m serious. Listen, I think [“Noah” director Darren Aronofsky] is a great director, but rock men? Come on. I could never get past that. The film immediately kicked off as a fantasy…that was a problem. If you begin that way, it’s hard to get past that without saying, “I’m going to build a boat and on it’s going to go creatures two by two, and make that credible.”

Any liberties I may have taken in terms of how I show this stuff was, I think, pretty safe ground because I’m always going always from what is the basis of reality, never fantasy….So the film had to be as real as I could make it.

Author’s Note: The above is taken from a round table interview at the “Exodus” press conference where religion writers from various outlets offered questions. Minor editing has been done for length.