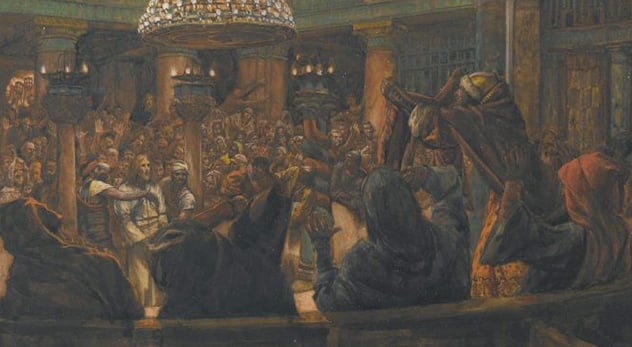 “The Torn Cloak–Jesus Condemned to Death by the Jews” by James Tissot is part of a rich tradition of Christian art furthering the idea that the Jews murdered Jesus. It is housed at the Brooklyn Museum in New York. – Courtesy of Wikimedia Commons (http://bit.ly/1wwuciC)

Saying “Jesus was Jewish” sounds so obvious to most Christians that it doesn’t seem worth the energy to exhale. Yet, many Christians never give the idea a second thought, which is why it needs reasserting despite its obviousness.

Christians, according to author James Carroll, have forgotten Jesus’ Jewishness. And this has has severe consequences. So the New York Times bestselling author and National Book Award winner has penned Christ, Actually: The Son of God for The Secular Age to reintroduce Christians to the Jewish Jesus. Here, Carroll discusses the negative effects of forgetting Jesus’ religious tradition and how modern Christians can recover a more accurate understanding of their Messiah.

RNS: You point out that we often overlook Jesus’ Jewishness. But Jesus in some ways bucked the Jewish law and the strictest Jewish leaders were often at odds with him. From a religious standpoint, how Jewish was he really?

JC: This is the key question. Religion is a human adaptation to the basic fact of the human condition that the Holy One is not directly accessible to finite creatures. Religion is an indirect, mediated, but real way of being connected to God. Jewish religion is a case in point. The Temple, the Law, the Tradition, the Scriptures, Sabbath observance, keeping Kosher, reciting the Shema–all of it serves the purpose of bridging the gulf that stands between creatures and their Creator.

The affirmation of Jesus’ divinity, which is essential to Christian faith, has often led to the conclusion that Jesus had no need of the bridging elements of Jewish religion. If Jesus engaged in these cultic practices, he was going through the motions, since his communion with God was a given of his condition. Religiously speaking, He was pretend Jew.

But that is like saying he was a pretend human being. If we start with his humanity, we affirm, with the tradition, that Jesus was like us in all ways, except sin. That means he could not foresee the future, could not defy gravity, could not avoid death. Nor could he, while alive on earth, have direct access to what’s called the beatific vision. Therefore, his need of Jewish religion was real and absolute. [tweetable]Jesus was no pretend Jew.[/tweetable] That must be the starting point of our commitment to Jesus.

If Jesus was at odds with fellow Jews over what it is to be a faithful Jew–and the tradition suggests that he was–we must understand such contention as occurring within the Jewish community, not from outside it. So he did not “buck the Jewish law;” he insisted upon it, even if he disagreed with others over its meaning and applicability at a given moment.

RNS: Early Christianity was more like an offshoot of Judaism, wasn’t it? When did this shift?

JC: All of those who first followed Jesus were Jews. When the Jesus movement began to spread across the Mediterranean, it appealed especially to that group of Gentiles who were already interested in and associated with Judaism–the so-called “God fearers.” The Jesus people understood themselves wholly within categories provided by the tradition of Israel.

The Roman War against the Jews between 68 and 135 C.E. and the destruction of the Temple traumatized the whole Jewish world, and caused a crisis of faith for every Jew–including the Jesus Jews. What is it to be a Jew without the Temple, center of the religion for a thousand years? Two groups of surviving Jews answered that question differently, and this is when the split between the Jesus people and “the Jews” began. But the split between the Synagogue and the Church did not become definitive and absolute until the early 4th century, when the Roman emperor Constantine became a Christian.

RNS: What have been some of the negative effects of Christians overlooking Jesus’ Jewishness? 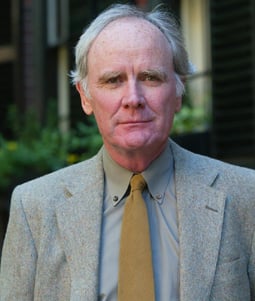 JC: When so-called Gentiles began to dominate the Jesus movement, and when they then read the Gospel accounts of Jesus’ conflict with “the Jews,” they found it possible to imagine that Jesus was one of them–a kind of Gentile, who not not really Jewish at all. They forgot, that is, not only that Jesus was fully and completely Jewish, but also that the Gospel texts about Jesus were themselves Jewish accounts, told in a Jewish way.

The most important consequence of this amnesia is that “Christians” began to regard “Jews” as enemies not only of the Church, but of God. This religious anti-Judaism morphed, over the centuries, into racial anti-semitism.

RNS: Many American Christians prefer to think of the holocaust as a “German” thing rather than a “Christian” thing, but the truth is more complicated, isn’t it?

JC: The Holocaust was not the work of “the Church” or “Christianity” or “the West.” It was the work of Hitler and the Third Reich, and their particular responsibility must be insisted upon. But Christians must continue to reckon with the harsh fact that Hitler’s lethal anti-semitism grew out of the soil of religious anti-judaism that preceded it across the centuries–and that was put forward as God’s truth by the Church. [tweetable] Nazi anti-semitism grew out of Church doctrine, not out of pagan, “Aryan” racism.[/tweetable]

By insisting on a narrow Nazi, or even German, culpability, Christians often fail to confront the fact of their broader complicity. Only this broader complicity explains how an entire continent and culture could have assumed the role of bystander, with the Churches remaining almost complete silent as the genocide unfolded, and with even the United States insisting on barring Jewish entry during the crucial period.

RNS: How should the church–practically speaking, Sunday to Sunday–begin to recover and promote a more accurate understanding of who Jesus was?

JC: Members of the church must do three things to recover the Jewishness of Jesus:

1. Christians must learn to read their sacred texts critically. Above all, the texts must be understood as reflecting a conflict that unfolded not between Jesus and “the Jews” in the year 30 or so, but a conflict between two groups of Jews–rabbis and Jesus people.

2. Christians must measure everything they say and believe about Jesus against the fact of his full, permanent character as an Orthodox Jew. This would make anti-jewish stereotyping impossible.

3. Christians should read and hear the anti-Jewish texts of the New Testament as if they themselves are Jews.

News
ADL report: Jewish lawmakers face anti-Semitic tropes online
News
Study: Biden still leads among Latino Christian voters, but Trump’s support has grown
Opinion
Why reading the Bible with reason and emotion alone doesn’t satisfy us
News
Trump’s Israel strategy makes few inroads with Jewish voters
News
In Oregon, churches and anti-fascists unite to provide mutual aid to fire evacuees and others in need
© Copyright 2020, Religion News Service. All rights reserved. Use of and/or registration on any portion of this site constitutes acceptance of our User Agreement and Privacy Policy, Privacy Statement and Cookie Notice. The material on this site may not be reproduced, distributed, transmitted, cached or otherwise used, except with the prior written permission of Religion News Service.