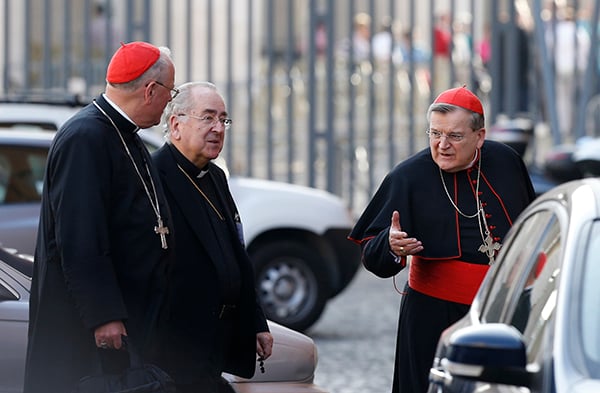 Left to right, Cardinals Timothy M. Dolan of New York, Stanislaw Rylko, president of the Pontifical Council for the Laity, and Raymond L. Burke, prefect of the Supreme Court of the Apostolic Signature, arrive for the morning session of the extraordinary Synod of Bishops on the family at the Vatican on Tuesday (Oct. 14). Photo by Paul Haring, courtesy of Catholic News Service
January 7, 2015
Kaya Oakes

(RNS) In an online interview this week, Cardinal Raymond Burke said the “radical feminism which has assaulted the Church and society since the 1960s has left men very marginalized.”

Left to right, Cardinals Timothy M. Dolan of New York; Stanislaw Rylko, president of the Pontifical Council for the Laity; and Raymond L. Burke, then-prefect of the Supreme Court of the Apostolic Signature, arrive for the morning session of the extraordinary Synod of Bishops on the family at the Vatican on Oct. 14, 2014. Photo by Paul Haring, courtesy of Catholic News Service

But many women will head to Mass this weekend and note that the priest, bishop and pope have something in common: They are all men, and the power they hold in institutional church structures hardly looks like marginalization.

In spite of Burke’s paranoid opinion that “rampant liturgical experimentation” resulted in men who were “really turned off” by the Mass, women will stand and recite a recently revised Nicene Creed that states that Christ died “for us men.” They will pray to a God referred to only by male pronouns even as God’s gender remains stubbornly mysterious. Even the language of the liturgy negates the presence of women.

Yet Burke is bewildered by women’s “self-focused attitudes” and “constant and insistent demanding of rights.” Women, he said, “respond very naturally to the invitation to be active in the Church.” And yet, when the sanctuary becomes “full of women,” and the parish activities and liturgy are influenced by them, these become “so feminine in many places that men do not want to get involved.”

The fact that Burke gave this interview to a website whose very name -- The New Emangelization -- may lead many to question whether it is actually a parody, indicates the level of absurdity in Burke’s claims that women have somehow taken over the Catholic Church.

There is also something disturbing and insulting about his ideas concerning the men already in the church.

Burke argues that “feminized” priests have been so influenced by overbearing women that they have lost their sense of manhood. But it was that same generation of “feminized” priests who encouraged women to study theology, write for Catholic magazines, take up leadership roles in parishes and even educate future priests. Those priests see women as collaborators. They do not see women as something to be feared.

The problem with Burke’s idea of manhood is that it is oversimplified and based on antiquated notions of gender. Men, according to Burke, have “particular gifts,” they “make sacrifices” and defend their families with “chivalry.” They are “heroic” and should demonstrate a “manly identity” and “manly virtues.”

Women are “wonderful,” but that’s just about the only compliment Burke manages to pay them before he trashes the presence of altar girls in favor of Knights of the Altar who will “defend Christ” with their “chivalrous service.”

It would be easy here to point out that Burke also demands that “men need to dress and act like men” while having a reputation as a Vatican fashionista who often sports “elaborate silk and lace vestments.” One blog actually pairs photos of Cardinal Burke with ones of Liberace, and the resemblance is uncanny. Burke’s notions of gender may be woefully outdated, but his sense of style is wrought with irony.

Irony is perhaps the bottom-line takeaway from Burke’s ideas about gender. It is ironic that a man who wears silk and lace chooses to lecture men on what it means to be masculine.

It is ironic that the same man blames women for the drop in vocations to the priesthood when many of those women would make excellent priests. Kaya Oakes is the author of Radical Reinvention: An Unlikely Return to the Catholic Church and a book on the evolution of DIY religion, forthcoming from Orbis Books in 2015. She teaches writing at the University of California, Berkeley. Photo courtesy of Kaya Oakes

It is ironic that women are considered a threat to a church that refers to itself as the “Bride of Christ.”

It is ironic that women who do the majority of catechesis at parishes, who educate priests, who write landmark works of theology and give birth to cardinals, bishops and popes are still not able to be leaders in the church. Because, according to Cardinal Burke, we’re just girls. And everyone knows girls are icky.

(Kaya Oakes is the author of Radical Reinvention: An Unlikely Return to the Catholic Church and a book on the evolution of DIY religion, forthcoming from Orbis Books in 2015. She teaches writing at the University of California, Berkeley. Follow her on Twitter @kayaoakes.)