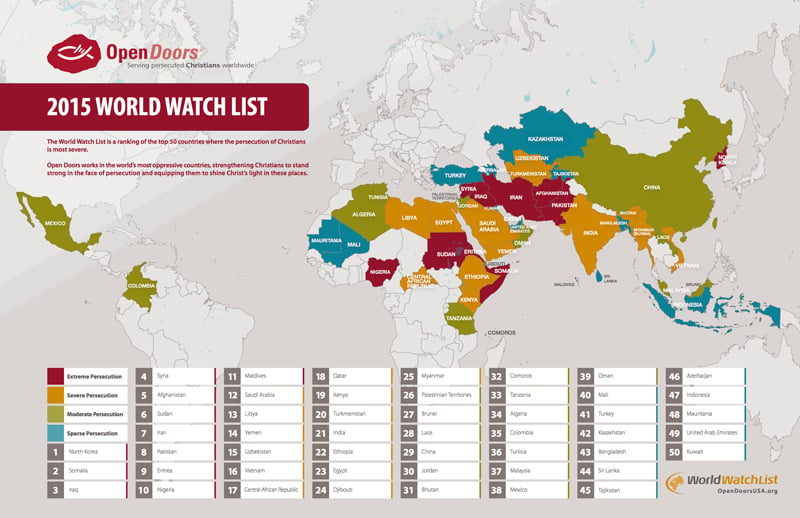 (RNS) From imprisonment to torture to beheadings, more Christians worldwide live in fear for their lives than at any time in the modern era.

That’s the message from Open Doors USA, which released its annual World Watch List on Wednesday (Jan. 7). Christian persecution reached historic levels in 2014, with approximately 100 million Christians around the world facing possible dire consequences for merely practicing their religion, according to the report. If current trends persist, many believe 2015 could be even worse.

“In regions where Christians are being persecuted as central targets, the trends and issues we track are expanding,” said David Curry, president of Open Doors, a nonprofit that aids persecuted Christians in the most oppressive countries and ranks nations based on the severity of persecution.

North Korea tops Open Doors’ list as the worst oppressor of Christians for the 13th consecutive year, but the list is dominated by African and Middle Eastern nations. Iraq, which experienced the mass displacement of Christians from its northern region, ranked third. Syria was listed fourth, due to the reign of ISIS in that war-torn region. Nigeria ranked 10th, due in part to the more than 1,000 Christians murdered or kidnapped by terrorist groups such as Boko Haram. Also included in the top 10 are Somalia, Afghanistan, Sudan, Iran, Pakistan and Eritrea.

Even though some Christian-majority nations are experiencing unprecedented levels of discrimination and oppression, Curry said Muslim extremists are the primary drivers of Christian persecution worldwide. This is the case in 40 of the 50 nations on this year’s list.

Todd Nettleton, a spokesman for Voice of the Martyrs, a global ministry serving persecuted Christians in oppressed nations, agreed with Curry that Muslim extremism is the main source of Christian oppression.

“Wherever there is growing Islamic radicalism, there is growing persecution of Christians,” he said. “Even where moderate Islamic states offer peace — and that is rare — they almost never have freedom to practice their faith and are often marked for death.”

Nina Shea, director of the Center for Religious Freedom at the Hudson Institute, said Islamic extremism is not just rampant in rogue terror groups, but also in the governments of nations such as Saudi Arabia (No. 12 on the list) and Egypt (No. 23). This has foreign policy implications, which Shea said has contributed to a failure on the part of the Obama administration to address the calamity adequately.

Curry and Nettleton also expressed disappointment in the administration’s response but said they hope that the appointment of Rabbi David Saperstein as the State Department’s ambassador-at-large for international religious freedom might signal a more aggressive approach. Conservatives criticized Obama for not filling the position sooner, and Saperstein’s critics say the rabbi’s liberal background may not bode well for his willingness to address global persecution aggressively.

Regardless, Open Doors leaders say something must be done to address the mounting persecution. The situation is reaching crisis levels: Christianity faces possible extinction in the Middle East and persecution is growing at alarming rates in Asia and Africa. Curry concluded:

“The 2015 Watch List is a wake-up call to Western countries to protect religious freedoms around the world.”