(RNS) Ostensibly, the horrific attack against Charlie Hebdo in Paris was because of the publication’s satirical images of the Prophet Muhammad.

But to view the assault as simply about images of Muhammad is to accept a long-standing narrative about Muslim sensitivity to portrayals of Muhammad, which plays into conceptions of Muslims as superstitious savages. 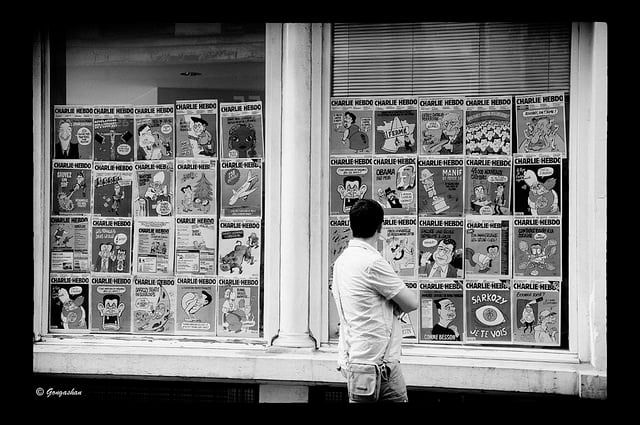 A man looks at Charlie Hebdo cartoons in a window.

Just as important, arguing that this attack is about free speech misses what may be the attackers’ true motivation, which is to wreak havoc and destruction.

Regarding images: Muhammad is a powerful symbol for Muslims. The Quran calls him a “beautiful role model,” and he is considered to be the most perfect Muslim.

It is generally accepted by Muslims that images of Muhammad, or any other person, do not appear in mosques.

However, this ban does not extend outside the mosque. Various Muslim cultures show a comfort with painting and figural representation. Images of Muhammad, his family, prophets and other holy figures exist. They are on display in museums throughout the world. In some, the faces are obscured, but in many, the faces are on full display.

While more common among Shiite communities, some of the most well-known depictions of Muhammad come from Sunni Turkey. In nonliturgical spaces, images of holy figures abound, including Muhammad.

The tradition of representation is very much alive throughout the Muslim communities, and books such as Sufi Comics demonstrate a desire for learning through the image.

Still, there is a strong belief that any depiction of Muhammad is a problem. In part, this is due to a lack of religious literacy, and in part to a puritanical, nihilistic vision of Islam supported by Saudi Arabia.

The result is that Muhammad is actually turned into an idol. He is turned into the God, which Muslims do not believe can be depicted at all.

Then there’s the free-speech argument.

Charlie Hebdo has a right to publish whatever it wants. At the same time, the material was racist. It did not matter if the images were going after Muslims, blacks or Jews; it was always about reinforcing racial and religious hierarchies. In a country where women’s headgear is legislated, religious expression is curtailed and a former prime minister calls minorities “scum,” what Hebdo does seems like bullying.

In no way is there any justification for violence against the paper. However, this is a community that sees itself as besieged. What the attackers are attempting to do is capitalize on that feeling. They provided a sense of revenge and power.

It would not be surprising to find out that they hope to create an overreaction against Muslims, both at official and popular levels. This type of response would allow the extremists to create a larger pool for recruiting members and drive the larger Muslim community to feeling even more alienated. We now understand that the attackers were nonreligious thugs, who became thugs using the name of religion.

Muslims do cherish Muhammad, and are hurt by those who ridicule him. However, most respond by focusing on how to honor him, not destroy others. That means that the Paris attacks cannot be seen as just a “typical Muslim response.” To do so would ignore history and misread what we know about religion in general, particularly about blasphemy.

Hussein Rashid is a professor of religion at Hofstra University, a term member at the Council on Foreign Relations and a Truman National Security Fellow. He works at the intersection of religion, art and national identity. Photo by Ali Ansary

Blasphemy is usually understood to be about God, and Muhammad is not God. Instead, we have to think about what it is the attackers want, which I suspect is more terror, and how they are going to get it, by making such attacks more common.

(Hussein Rashid is a professor of religion at Hofstra University, a term member at the Council on Foreign Relations and a Truman National Security Fellow. He works at the intersection of religion, art and national identity.) 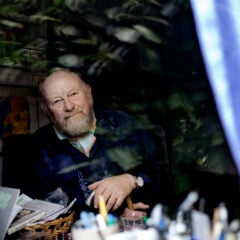