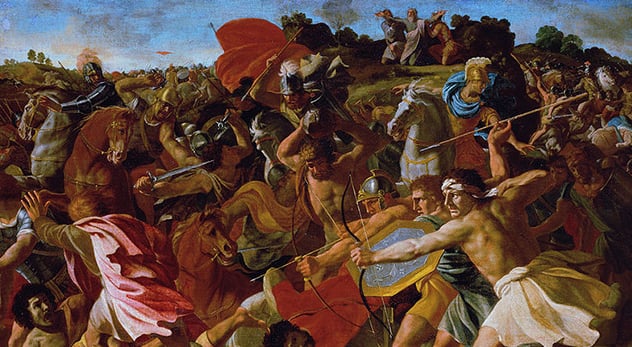 Photo: “The Victory of Joshua over the Amalekites” by Nicolas Poussin (c. 1624) / Courtesy of Wikimedia Commons

Have you ever wondered why there are no Amalekites, Perizzites, Hivites and Jebusites today? If you believe the Biblical accounts of history in the Old Testament are accurate, it may be because God commanded the Israelites to slaughter those people groups–men, women, children, infants, and animals.

Can you imagine someone ripping a newborn baby from its mother’s breast and severing its head from it’s body? The Bible seems to say that God once commanded such actions. How do we reconcile those passages with a belief that God is unconditionally loving to all human beings? Such passages are among the least discussed and most ethically problematic in the Bible, but they cannot be ignored just because we don’t like what they say.

Paul Copan and Matthew Flannagan have sought to address the existence of these passages with the idea of a loving God in their book, Did God Really Command Genocide? Coming to Terms With the Justice of God, and here we discuss their views on the matter. Take a look and decide for yourself what you believe about these scandalous Scripture passages.

RNS: Paul, there are some really horrible scripture passages in the Bible–especially the Old Testament. What is the worst or most difficult?

Paul Copan (PC): Definitely making the list are questions related to “slavery” or servitude, God’s seeming harshness in judgments and punishments, and God’s command to sacrifice Isaac. But perhaps the most troubling question from the Old Testament is God’s command to kill and drive out the Canaanites and perhaps even innocent ones—and there are similar commands concerning the Midianites and Amalekites as well. Some have suggested that this is a command to commit genocide, although we dispute this in our book and attempt to bring clarity to this and related questions.

RNS: In these passages, the text says God told them the Israelites to slaughter children, women, even animals. How do we even begin to process this?

PC: We must first understand that the Canaanites engaged in acts that would be considered criminal in any civilized society–incest, infant sacrifice, ritual prostitution, bestiality. Also, God waited over 400 years for Canaan to hit moral rock-bottom before commanding they be driven out (Gen. 15:16). In addition, things are less straightforward than what first appears. Tensions exist within the biblical text itself:

First, the Israelites were commanded to “drive out” or “dispossess” the Canaanites, but this assumes Canaanites would be alive—not killed—if driven out. Second, the “utterly destroy” or “leave alive nothing that breathes” language is hyperbolic in Scripture’s war texts as in other ancient Near Eastern war texts. It typically stands alongside mention of many survivors—like when sports teams use the language of “totally slaughtering” their opponents. The land has “rest from war” (Joshua 21:44), yet Joshua says nations still remain in Israel’s midst (23:12); Judges 1-2 regularly repeats “they could not drive them out.”  The book addresses more of these nuances.

RNS: Matt, you write, “In the Bible, God appropriates the writing of a human being with the writer’s own personality, character, and writing style.” Does this change the way we might read passages where God seemingly commands violence?

Matthew Flannagan (MF): Those passages occur in the context of a historical narrative. We are reading history, not as a 21st century writer would write it, but history written by the literary conventions, style of narration and level of precision used by an the ancient Near Eastern writer. We, therefore, need to ask how phrases such as “they completely destroyed everyone in it” or “he left no survivors” or “not sparing anyone who breathed” or “until they exterminated them” functioned in this sort of literature. It is not always as one might assume.

RNS: You also talk about “hagiographic hyperbole.” What is this and why does it matter?

MF: Hagiographic hyperbole is a term used by philosopher Nicholas Wolterstorff to describe the kind of historical writing you see in the book of Joshua. The basic idea is that the accounts of Israel’s early battles in Canaan are narrated in a particular style, which is not intended to be literal in all of its details and contains a lot of hyperbole, formulaic language and literary expressions for rhetorical effect. We argue in our book that the evidence both from within the Bible and from other ancient Near Eastern conquest accounts supports this conclusion.

When biblical authors use phrases such as “They totally destroyed them, not sparing anyone that breathed” (Josh 11:11), which are later followed by passages that presuppose that the same areas are still inhabited by the same peoples, they cannot be affirming that literally every man, woman and child was killed at God’s command. It is a mistake to take them as affirming that Israel literally engaged in complete annihilation at God’s command. They are exaggerating for rhetorical effect.

RNS: An entire section of the book addresses the question, “Is it always wrong to kill innocent people?” Well, is it, Paul?

PC: Let’s draw some distinctions. There are (a) absolute duties to love God and avoid idolatry, (b) general duties that, all things being equal, ought to be obeyed such as “don’t deceive” and “don’t kill,” and (c) unusual cases of supreme emergency, in which some general duties may be overridden. For example, to save innocent human life from would-be killers, deception would be morally permissible (cp. Ex. 1:15-21; 1 Sam. 16:1-2).

Likewise, God issues a unique command to drive out a wicked people; if they stay behind—despite the obvious divine public signs and wonders–Red Sea crossing, pillar and fire cloud, manna—they make themselves vulnerable to Israelite attack. God didn’t command something intrinsically evil, though difficult, it was morally justifiable; God had good reason for issuing this command.

RNS: Matt, people often point out that God is both loving and just. I agree, but commanding the slaughter of children, innocents, and animals by other sinners, is neither in my book. What am I missing?

MF: There are two claims. First, a loving and just person would absolutely never endorse killing innocents no matter what the circumstances. Second, a loving and just person would endorse a strong presumption against such actions but could, in principle, support them in rare circumstances if there is some greater good that overrides this presumption.

The existence of cases such as those where a woman in childbirth will die unless her child’s head is crushed, both conjoined twins will die unless one is deprived of access to a vital organ, on a crowded life-boat one has to decide which people to push over, or on a plane doomed to crash who gets a parachute and who does not, suggest that the second claim and not first that is true. This means that while a loving and just God does endorse a general rule against killing the innocent, he could allow exceptions to it in rare, unusual occasions.