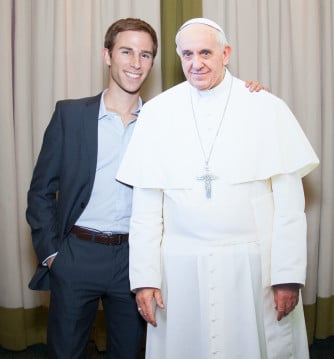 The Pope was responding to last week’s Charlie Hebdo attacks, the violence of which he condemned, while at the same time condoning physical violence as a response to offense. Seriously. Even if in jest.

“If he says a swear word against my mother, he’s going to get a punch in the nose,” Francis said, throwing an air jab at his friend and aide Alberto Gasparri. “But that’s normal. That’s normal.”

Thuggishly throwing punches might be “normal” if you’re a former bouncer, but most free speech advocates favor more speech, better speech, counterspeech as the best recourse to offense.

It goes without saying that Pope Francis is not a free speech advocate.

After affirming it as a fundamental human right, Francis added, “In freedom of expression there are limits.”

That’s correct. There are legal limits to freedom of expression, and they vary by country. In the U.S. it’s illegal to incite imminent lawless action. In Thailand it’s illegal to insult the king. In France it’s illegal to deny the Holocaust. And in nearly 100 countries, defamation of religion, blasphemy and apostasy are illegal.

If Pope Francis’ remarks were literal and in reference to one of those countries, I’d look the other way. You cannot provoke, insult or make fun of faith in those places unless you’re willing to pay a hefty fine, serve some jail time or even face the death penalty. That’s true.

But Francis’ remarks were not literal statements of legal fact, they were prescriptive pleas.

If #JeSuisCharlie and the magazine’s unprecedented print run taught us anything this week, it’s that people do not take kindly to being silenced.

Religion, just like everything else, is fair game for satirists. In suggesting that faith be protected from public scrutiny just because some consider it sacred or sensitive, Pope Francis negates the very essence and definition of free speech.

If you go after freedom of expression, satirists will come after your religion. Free speech advocates are sure to take Pope Francis’ remarks against “provoking” faith as provocation. At least they’ll strike back with pens rather than punches.