(RNS) More than 100 Roman Catholic leaders are using this week’s annual march against legal abortion to press anti-abortion House members to pass immigration reform, saying they should see it as another “pro-life” issue.

“As brothers and sisters in faith, we urge these elected officials and all Catholics to defend the sanctity of human lives at all stages. We recognize the image of God in the migrant at the border, in the prisoner on death row, in the pregnant woman and in the hungry child,” the signers say in a letter sent Wednesday (Jan. 21) to two dozen Catholic members of the House of Representatives who are vocal abortion opponents. 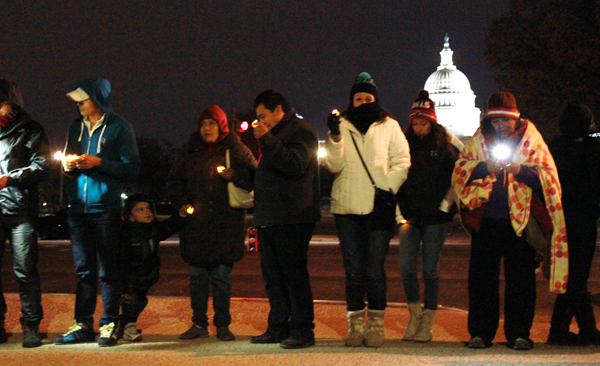 Immigration reform supporters pray and sing in both English and Spanish outside the U.S. Capitol on Nov. 12, 2013, calling on Congress to pass comprehensive immigration reform. RNS photo by Katherine Burgess

The letter, organized by the Washington-based progressive advocacy group Faith in Public Life, is expected to be published as a full-page ad in Politico on Thursday.

That’s the day tens of thousands of demonstrators — including some of the House members the statement addresses — are expected to gather in Washington to protest the 1973 Supreme Court decision that legalized abortion, an annual display of passionate anti-abortion sentiment and political muscle.

The statement pointedly cites Pope Francis’ views that immigration woes and economic inequality are threats to life along with abortion, and it appears to be another example of the so-called Francis effect that is recasting the nation’s culture war by shifting the debates onto a broader terrain.

In fact, one of the signers is Helen Alvare, a law professor at George Mason University and a longtime abortion opponent who advises the U.S. bishops on moral and legal issues related to the family.

Two retired bishops are also among the signers, along with the Rev. Larry Snyder, head of Catholic Charities USA, and more than 31 Catholic university presidents. Numerous nuns active in social justice work and theologians and academics are also represented.

The letter notes that at a Mass celebrated at the U.S.-Mexico border last year, Boston Cardinal Sean O’Malley, head of the Committee on Pro-Life Activities for the U.S. Conference of Catholic Bishops, called immigration “another pro-life issue.” O’Malley will also take part in Thursday’s protest march against the Roe v. Wade decision.

This recasting of the Catholic agenda began almost as soon as Francis was elected in 2013 and has continued to pick up speed as the pope keeps highlighting a range of issues as threats to life, including climate change.

But the rebalancing has upset many conservative Catholics who were used to viewing opposition to abortion — and, increasingly, opposition to gay marriage —  as public policy issues that trumped all other concerns. They had also seen previous popes, as well as the U.S. hierarchy, as allies in that approach, and they see the pope’s focus on social justice and the environment as favoring liberal agenda items.

That sets up an intriguing dynamic in light of Francis’ planned visit to the U.S. in September, his first.

The pope this week confirmed that he would be visiting Philadelphia, New York and Washington, probably from Sept. 22-27. Some of his most high-profile events could be in the nation’s capital, where he is expected to meet President Obama at the White House; Francis may also become the first pope to address a joint session of Congress.

Francis’ approach may discomfit Republicans as much as Democrats, who are used to being on the receiving end of most critiques from Catholic officials.

Wednesday’s letter, for example, targeted mainly Catholic Republicans, who are the chief foes of legal abortion. But Republicans who control the House (and now the Senate as well) have also been the ones blocking comprehensive immigration reform, which the U.S. bishops hoped would pass.

The USCCB has praised the controversial executive actions Obama took to protect immigrants in the absence of a broader reform package, and Republicans emboldened by their election victories in November have already moved to reverse those executive orders and crack down on immigrants.

House Speaker John Boehner, a Republican from Ohio, is among those who supported a Jan. 14 measure to cut off funding for Obama’s immigration actions. One of the signers of this week’s letter is the president of Boehner’s alma mater, Jesuit priest Michael J. Graham of Xavier University in Cincinnati.

Another prominent Catholic Republican, Steve King of Iowa, made waves on the immigration issue when he called a 20-year-old Latino student from Dallas who was chosen to sit with the first lady during Tuesday’s State of the Union address a “deportable.”

The letter from Catholic leaders to House members said “delay and partisan bickering will only lead to more hardship, suffering and death.” It took aim at Republican tactics by declaring that the immigration crisis “will not be solved by threats to shut down government agencies, enforcement-only strategies or piecemeal approaches.”

“Breaking up immigrant families and denying protection to those fleeing gang or cartel violence, as just one example, is neither a humane or effective strategy,” it says. “Comprehensive immigration reform that would create an earned path to citizenship for those in the shadows, expedite family reunification, strengthen refugee protection, address why desperate people reluctantly uproot and cross borders, deserves a vote now.”