In January 2014, a graph appeared on this blog depicting a 60-year “Great Decline” in American religiosity. The graph, and the conversation it sparked, seemed like great fodder for a session at the annual meeting of the American Society of Church History, so I began pulling together a panel. 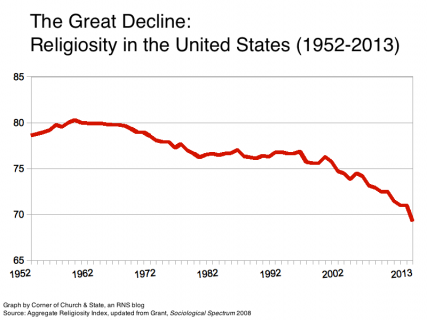 Before the conference met, however, this blog posted an updated graph charting a rise before the fall.

The research methodology for both graphs was the same. What changed was periodization. Start the clock at 1945 instead of 1952, and the line changes dramatically. In fact, the whole narrative changes. A decline becomes a rise and fall, with the uptick at the beginning begging interpretation as much as the slide at the end.

For my contribution to the panel, then, I experimented with starting the clock even earlier. Some of the survey data used to create the previous two graphs didn’t begin to be generated until the mid-20th century, so the comparison cannot be as neat. More than just the periodization shifts. Still, I was able to find two other lines introducing additional possible narratives for the history of religiosity in the United States. Did the twentieth century see a rise and fall of religiosity within a larger pattern of stability?

Or does the late 20th-century religious decline shrink to insignificance when compared with the religious rise since the founding of the nation? As I said, I know that the data sets and methods for these graphs are not identical, and neither are their underlying assumptions. The Gallup poll lets church attendance basically stand in for religiosity, while Tobin’s work complicates that association. A different disagreement separates Tobin’s work from the last graph, which rests on the work of Roger Finke and Rodney Stark, The Churching of America, 1776-1990. Finke and Stark advanced supply-side explanations for changes in religious behavior (more people go to church when there are more, and better, churches for them to go to), while Tobin favors demand-side explanations (when people get their needs met in other ways, they are less religious). Perhaps it took a while for religious supply to match demand, but, once the market was saturated, demand factors kicked in?

I look to my colleagues in the social sciences to pursue questions like this. As a historian, my questions are different, as are my tools for answering them. What I bring to the conversation is the reminder that even a long trend—60 years!—exists in a larger historical framework, and that shifting the frame also changes the picture.

Elesha Coffman is assistant professor of church history at the University of Dubuque Theological Seminary. She is the author of The Christian Century and the Rise of the Protestant Mainline.