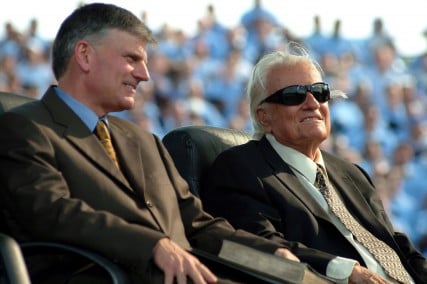 Evangelist Franklin Graham with his father, Billy Graham, at the elder Graham’s final crusade in New York in 2005.

(RNS) Franklin Graham’s Facebook fulminations last week about plans to issue the Muslim call to prayer from the bell tower of Duke Chapel transformed what could have been a nuanced campus debate about religious establishment, sacred space, and pluralism into a countrywide fracas that calls to mind 1980s culture wars.

Why did Franklin Graham’s Facebook post carry this much power? Two reasons. One, some people simply love his narrative about Islam. Recent polling shows that a significant number of Americans believe that Islam is more likely than other religions to encourage violence, and voice substantial support for police profiling of Muslims. Graham’s narrative builds off these suspicions that go far beyond his conservative evangelical constituency.

But more important, he’s a Graham. He carries the power of his father’s name and his legendary evangelistic ministry, the Billy Graham Evangelistic Association, or BGEA. According to Grant Wacker’s new biography, Billy Graham is the closest thing America has had to a pope, beloved by many for his ability to channel the ideals of middle America as much as a convicting gospel. The fact that, despite his retirement in 2005, the BGEA continues to use his likeness in promotional materials and that political candidates left and right still clamor for photo ops with Billy Graham are testaments to his enduring status as “America’s Pastor.”

But whatever “Graham” means now is different from what it meant in years past. For most of his career, especially in his later years, the elder Graham was the embodiment of a moderate evangelicalism.

After learning his lesson from entanglements with Richard Nixon, Billy Graham tried his best (albeit with mixed success) to stay nonpartisan, and avoid associating with the surging Christian right during the 1980s and ’90s.

He refused to take a hard line on biblical inerrancy. He moved away from speculating about hell or who would be there. Regarding Islam, Billy Graham once intoned “I have some wonderful friends among the Muslim people and have great respect and tolerance for them. Because we are a pluralistic society, we are going to have to recognize that we are no longer just a Jewish and Christian society.”

Billy Graham did meet with Mitt Romney before the 2012 presidential election. Shortly after, his elderly visage was plastered on a full-page ad promoting an unnamed candidate who professed “biblical values.” Some have questioned his actual involvement in this media campaign, but if nothing else, the exceptional nature of this near-endorsement proves the larger rule of how successful Graham has been historically in rising above the fragmentary cultural fray.

Franklin Graham, by contrast, has frequently criticized President Obama publicly (even questioning his Christian faith and repeating far-right rumors that Obama was born abroad). As CEO of the BGEA, he has recently led the organization into a much more conservative direction on questions of scriptural authority, eternal damnation, and hallmark culture war issues.

Recent covers stories of the BGEA publication Decision provocatively ask “Is Islam a Religion of Peace?” (with a blood-stained knife pictured prominently for effect), warn of the dangers of compromise on scriptural inerrancy, and posit hell as the likely result for those who do not toe the evangelical line on moral issues like homosexuality.

But the apple does not fall too far from the tree, because even though Franklin Graham seems to have departed from his father’s more gentle demeanor, there is commonality in their communication strategy. Like his father, the younger Graham is preaching to the choir.

Though Billy Graham was known as an evangelist to the unsaved, many attendees at his crusades were already Christians and most of those who made a decision for Christ were church attendees. They showed up not to be converted as much as to be reminded of who they already were, or at least aspired to be.

Franklin Graham, in his latest comments about Duke University and an Islamic prayer call, has delivered the same dynamic. He has taken a complicated debate about pluralism and made it about the inherent evil of Islam. This trope re-energizes those looking for an excuse to paint all Muslims with the same brush even as it gives liberals what they need to label other voices in the Duke Chapel debate as backwoods fundamentalists.

He has given the faithful of both camps what they want to hear, further proving the lasting legacy of the Graham name, for better or worse.