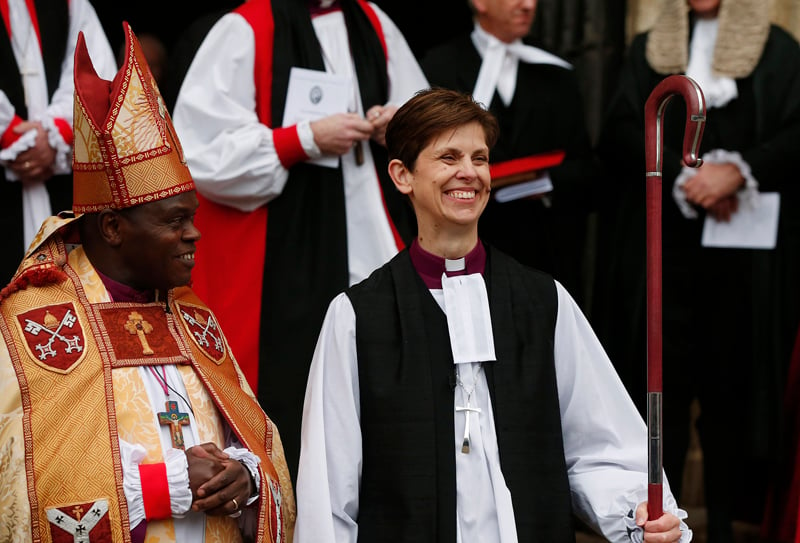 The first female bishop in the Church of England, Libby Lane, steps outside following her consecration service at York Minster in York, northern England, on Monday (January 26, 2015). Photo courtesy of REUTERS/Phil Noble
*Note: This photo may only be republished with RNS-WOMEN-ORDAIN, originally published on January 26, 2015

CANTERBURY, England (RNS) More than 1,000 people watched as Uganda-born Archbishop of York John Sentamu, laid hands on the Rev. Libby Lane Monday (Jan. 26), making her the eighth bishop of Stockport and the first woman bishop in the Church of England.

A large choir sang as bishops from all over the world watched the historic ceremony described by Archbishop of Canterbury Justin Welby as “a completely new phrase in our existence.”

Her husband, an ordained priest, too, watched from the sidelines.

But it was not all hymn singing and rejoicing in one of England’s great medieval cathedrals, York Minster.

Immediately after Sentamu asked the congregation if it was also their will that Lane be consecrated as a bishop, a lone male voice was heard ringing out — “No! Not in the Bible.”

Sentamu quickly read from a prepared text in which he said he was obeying “Her Majesty’s command and proceeding with the consecration of Libby Lane.” (Queen Elizabeth II is the supreme governor of the Church of England.)

But the traditionalists have a lot to say yet.

On Feb. 2, the Rev. Philip North will be consecrated bishop of Burnley in the York diocese, but Sentamu will not lay hands on the new bishop.

Instead, two other bishops — watched by Sentamu — will lay hands on North who is a strong opponent of women in the ministry and a member of the traditionalist Company of Mission Priests.

A statement from Women and the Church, or WATCH, said it was “dismayed” by the arrangements. “We believe it is unprecedented that an archbishop should be present at a consecration in his own province and not lay hands on a candidate,” the group said in a statement.

But Sentamu said his decision was not due to a “theology of taint.”

He said archbishops had always had the power to “delegate” part of their role as chief consecrator. He added: “Any suggestion that the arrangements proposed for the consecration of the Bishop of Burnley are influenced by a theology of ‘taint’ would be mistaken.”

One of Britain’s best-known columnists, Janet Street-Porter of The Independent, wrote in a Saturday column: “It’s as if the Archbishop of York John Sentamu is deemed ‘unclean’ in the eyes of traditionalists because he will have consecrated a woman — a process that was democratically agreed upon last November after decades of procrastination.” She asked: “Is this really any more modern than sharia law?” 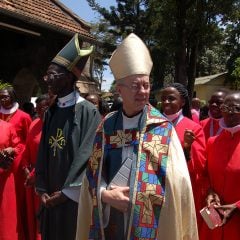