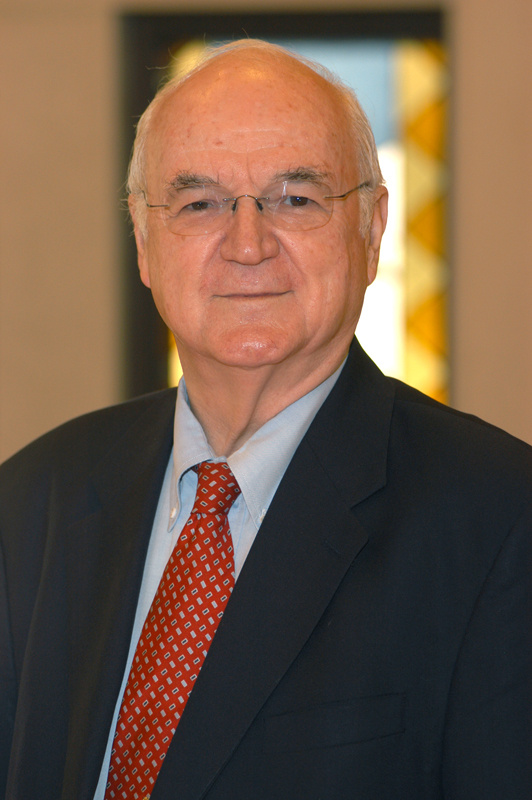 The Rev. Richard McBrien, a renowned Catholic theologian at the University of Notre Dame who wrote comprehensive works on church history and delivered punchy sound bites from a liberal perspective, died Sunday (Jan. 25). He was 78 and had been in poor health for several years. Photo courtesy of University of Notre Dame
January 26, 2015
David Gibson

(RNS) The Rev. Richard McBrien, a renowned Catholic theologian at the University of Notre Dame who wrote comprehensive works on church history and delivered punchy sound bites from a liberal perspective, died Sunday (Jan. 25). He was 78 and had been in poor health for several years.

McBrien joined Notre Dame in 1980 and quickly became not only a standout for the theology department but also an outspoken liberal commentator just as Pope John Paul II, who was elected in 1978, was pushing the Catholic Church in a more conservative direction.

In his media punditry and in a weekly column that ran in some diocesan newspapers -- and was increasingly barred in others -- McBrien argued for the ordination of women as priests, optional celibacy, and birth control, among other things. That made him a hero to progressives and the bane of conservatives, who often lobbied the hierarchy to discipline him.

Despite courting controversy, he always remained a priest in good standing.

“At his peak in the 1980s and ’90s, it is arguable that McBrien had a higher media profile than anyone in the Catholic church other than Pope John Paul II,” the National Catholic Reporter, a leading liberal periodical where McBrien was a regular contributor, wrote in its obituary. “He was the ideal interview: knowledgeable, able to express complex ideas in digestible sound bites, and utterly unafraid of controversy.”

“I don’t hold things back,” McBrien said in a 1990 profile by the Chicago Tribune.

McBrien was prolific in his output, as well: He wrote nearly 2,400 columns in 45 years.

But he was also a learned and widely respected scholar who wrote 25 books, among them “Catholicism,” “Lives of the Saints” and “Lives of the Popes.” Some of them were doorstoppers, but they were all as readable and accessible as his other writings, and serve as reference works for scholars and lay people alike.

McBrien was born in 1936 and grew up in West Hartford, Conn., the fourth of five children. NCR noted that his father was an Irish policeman and his mother was an Italian nurse.

He was ordained a priest of the Archdiocese of Hartford in 1962 and went to Rome to study for a doctorate in theology at Rome’s Jesuit-run Gregorian University. He was there during the momentous years of debate and reform at the Second Vatican Council, and returned to the U.S. in 1965 where he rapidly emerged as a star of Catholic theology.

In a 2008 interview with The Boston Globe, McBrien was asked why he never left the church over his differences with official teaching:

“Because it's my church. It’s my home,” he replied. “And I was born in it. I’ve been a Catholic all my life. And I have affirmation from so many good people. I feel that I have a responsibility to them to continue working at it and doing the best I can.”

McBrien had moved back to Connecticut as his health failed.