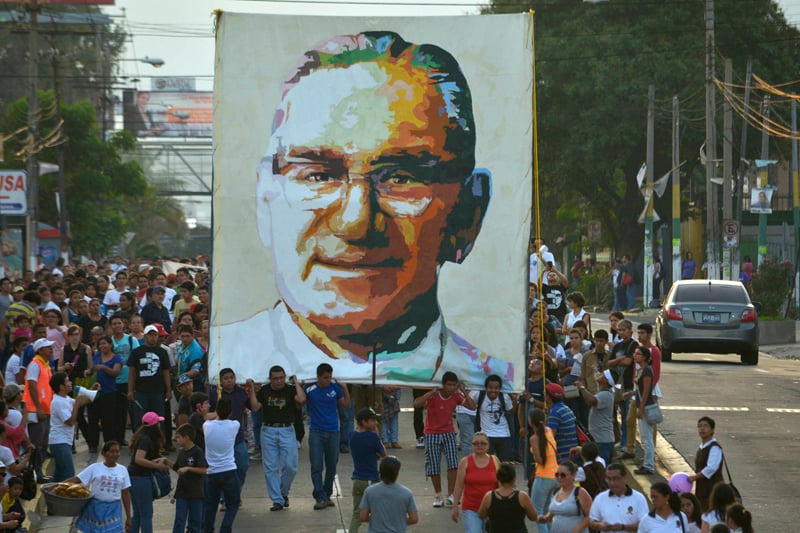 People carry a picture of the late Archbishop Oscar Arnulfo Romero during a march ahead of the 34th anniversary of his assassination in San Salvador on March 22, 2014. Photo courtesy of REUTERS/Jessica Orellana
*Editors: This photo can only be republished with RNS-ROMERO-POPE, originally transmitted on Feb. 3, 2015.

(RNS) Pope Francis on Tuesday (Feb. 3) officially declared that Archbishop Oscar Romero, assassinated by a right-wing death squad in 1980 while celebrating Mass in El Salvador, was a martyr for the faith, clearing the way for his beatification.

The move ends decades of fierce debate over Romero’s legacy, but it was not a complete surprise: Francis, the first Latin American pope, has often said he thought Romero was a martyr worthy of consideration for sainthood.

But his view contrasts with the conservative papacies of John Paul II and Benedict XVI, which viewed Romero as an icon of the theological left who was killed for political reasons because he spoke out against poverty and human rights abuses.

As a result, Romero’s cause for canonization languished in the Vatican’s bureaucratic limbo despite his great popularity elsewhere.

That is set to change. Tuesday’s declaration by Francis stated that Romero was “killed in hatred of the faith.” On Wednesday, the Vatican is scheduled to hold a news conference with Archbishop Vincenzo Paglia, a Vatican official who is promoting Romero’s cause for canonization.

Paglia may announce a date for Romero’s beatification, the final step before canonization, which is a formal declaration that a person is a saint.

Romero, the archbishop of San Salvador, was assassinated a day after he delivered a homily calling for soldiers to lay down their guns and end government repression in the country’s bloody civil war. Romero’s death at the altar came early on in a civil war that would result in the deaths of 75,000 Salvadorans.

In his sermon on March 24, 1980, just minutes before his death, Romero concluded with these words on the parable of the grain of wheat.

“Those who surrender to the service of the poor through love of Christ, will live like the grain of wheat that dies,” he said. “It only apparently dies. If it were not to die, it would remain a solitary grain. The harvest comes because of the grain that dies. … We know that every effort to improve society, above all when society is so full of injustice and sin, is an effort that God blesses; that God wants; that God demands of us.”

Romero’s cause was started nearly two decades ago when St. John Paul II gave him the title of Servant of God, in 1997. But his case never advanced amid lingering Vatican suspicion of liberation theology, which saw the gospel message as a vehicle of economic reform. That school of thought was suppressed by both John Paul and Benedict XVI.

Martyrs, however, can be beatified without a miracle; a second miracle attributed to Romero’s intercession would still be needed to make him a saint.

But Francis has also shown on several occasions that he will circumvent the usual requirements to elevate someone who he believes is worthy of veneration.

(Josephine McKenna contributed to this story.)