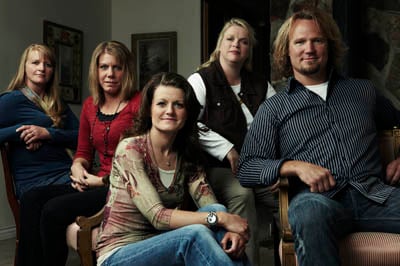 (Reuters) The husband in a household featured on reality show “Sister Wives” has legally divorced one of the four women he lives with and married another, a spokesman for the show said on Wednesday.

Kody Brown and the four women he calls his spouses live in Nevada and have 17 children. Their life has been broadcast on the TLC cable channel since 2010. Legally, Brown is married to only one woman, even though he says all four are his wives.

While previously living in Utah, the family legally challenged the state’s ban on consenting adults cohabiting in a marriage-like relationship when they are already legally wedded to someone else.

Last year, a U.S. District Court judge finalized his earlier ruling that struck down that provision, in a case that the Utah attorney general’s office is appealing.

Brown and the women he calls spouses, Meri, Christine, Janelle and Robyn, are part of the Apostolic United Brethren, a Utah-based church that follows a plural marriage doctrine. Last season, the program followed their move from Utah to Las Vegas.

“We have chosen to legally restructure our family,” the Brown family said in a statement. “We made this decision together as a family.”

In the arrangement, Kody Brown divorced Meri and married Robyn, said Raul Rojas, a spokesman for the TLC show.

Celebrity website TMZ reported that the divorce and marriage was meant to ensure Robyn’s children have access to insurance and similar benefits. Rojas declined to confirm that.

Polygamy is illegal in all 50 U.S. states. Critics of the practice say it denigrates women and places them in a subservient position in relation to their husband.