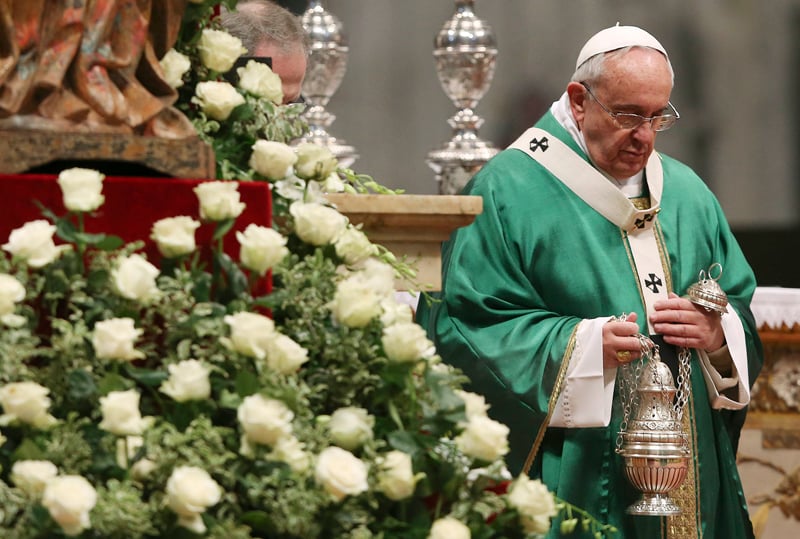 (RNS) Pope Francis celebrates a mass in St. Peter’s Basilica at the Vatican, February 15, 2015. Photo by REUTERS/Alessandro Bianchi. * This photo can only be used with RNS-POPE-CHALLENGE, transmitted Feb. 15, 2015.

VATICAN CITY (RNS) In a powerful sermon that signaled his desire to push ahead with historic reforms, Pope Francis on Sunday (Feb. 15) said the Roman Catholic Church must be open and welcoming, whatever the costs.

He also warned the hierarchy not to be “a closed caste” but to lead in reaching out to all who are rejected by society and the church.

“There are two ways of thinking and of having faith: we can fear to lose the saved and we can want to save the lost,” Francis told hundreds of cardinals and bishops arrayed before him in St. Peter’s Basilica at a Mass centered on the story of Jesus healing a leper rather than rejecting him.

“Even today it can happen that we stand at the crossroads of these two ways of thinking,” the pope said as he outlined the current debate in the church between those seen as doctrinal legalists and those, like Francis, who want a more pastoral approach.

“Jesus responds immediately to the leper’s plea, without waiting to study the situation and all its possible consequences,” Francis declared. “For Jesus, what matters above all is reaching out to save those far off, healing the wounds of the sick, restoring everyone to God’s family. And this is scandalous to some people!”

“Jesus is not afraid of this kind of scandal,” the pontiff continued. “He does not think of the close-minded who are scandalized even by a work of healing, scandalized before any kind of openness, by any action outside of their mental and spiritual boxes, by any caress or sign of tenderness which does not fit into their usual thinking and their ritual purity.”

Since his election almost two years ago, Francis has pushed the church to focus less on denouncing the sins of others — especially on issues of sexual morality — and to instead to reach out more to the poor and social outcasts.

He also wants the church, especially the leadership, to reform itself, and he has convened a series of high-level summits at the Vatican to discuss overhauling the Vatican bureaucracy and changing church practices to, for example, enable divorced and remarried Catholics to receive Communion.

But there was a sense at meetings in the Vatican over the past week that the momentum for change may be slowing — in part due to resistance from doctrinal conservatives and the Vatican’s old guard — and could use a jump-start.

Francis seemed to provide such a jolt on Sunday in remarks that were “truly foundational,” in the words of the Rev. Antonio Spadaro, an Italian Jesuit who is close to the pope.

The Rev. Thomas Rosica, a Canadian priest who works with the Vatican communications office, tweeted that “more than anything I’ve heard from (the pope) today’s homily is his mission statement.”

Throughout his 15-minute homily, Francis repeatedly slammed the “narrow and prejudiced mentality” of believers who cling to religious laws out of fear. They wind up rejecting the very people they should be ministering to, he said, which means anyone on the margins of society “who encounters discrimination.”

“Total openness to serving others is our hallmark, it alone is our title of honor!” Francis said at the Mass to mark his appointment of 20 new cardinals on Saturday.

The new cardinals had joined Francis and more than 150 other members of the College of Cardinals for talks over the past week on restructuring the dysfunctional papal bureaucracy known as the Roman Curia.

But the background noise to those meetings, and in other, smaller meetings among the pope’s top advisers, was the ongoing and increasingly pointed arguments between those who want to slow or halt Francis’ drive for change and those who think the 78-year-old pontiff needs to act more decisively, and soon.

Francis himself seemed to acknowledge the opposition, citing New Testament passages in which St. Peter (considered by Catholic tradition to be the first pope – was rebuked by other early church leaders for entering the house of a pagan, and when St. Paul faced criticism for not requiring Christian converts to observe all aspects of Jewish law.

“Charity is creative in finding the right words to speak to all those considered incurable and hence untouchable,” Francis said. “Contact is the true language of communication.”

Francis said this mission applied to anyone in today’s world who is pushed aside “for whatever reason.”

But he also listed specific examples, saying the cardinals should see “the crucified Lord” in the hungry and the unemployed, those who are in prison and “even in those who have lost their faith, or declared themselves to be atheists, or turned away from the practice of the faith.”