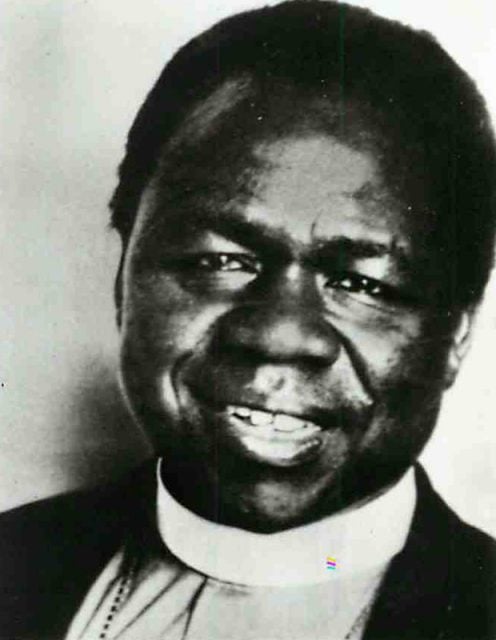 Archbishop Janani Luwum paid with his life; he was assassinated on Feb.16, 1977, his body placed in a mangled car wreck in a staged accident. (Photo dated 1977) Religion News Service file photo

(RNS) Armed with a Bible and a cross, a Ugandan Anglican archbishop took a bold step 38 years ago when he demanded that dictator Idi Amin put an end to extrajudicial killings, political repression, corruption and ethnic persecution.

Archbishop Janani Luwum paid with his life; he was assassinated on Feb. 16, 1977, his body placed in mangled car wreck in a staged accident. Reports suggest Amin ordered the cleric’s death.

But on Monday (Feb. 16), the country celebrated the life and ministry of the late cleric with a public holiday.

Ugandan President Yoweri Museveni spoke at an international memorial organized by the Anglican Church of Uganda to mark Luwum’s life.

“He chose to die for the truth,” Museveni said at the memorial in Luwum’s home village and burial site, 14 miles north of Kitgum in northern Uganda. “We salute him for that, and we shall always be grateful to his memory forever.” 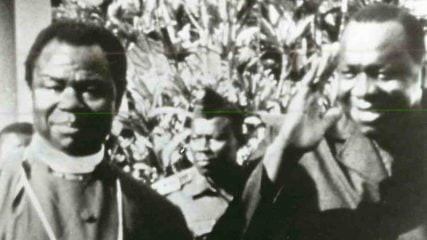 The late Anglican Archbishop Janani Luwum, left, who was murdered in Uganda, is shown with Uganda’s President Idi Amin, when the two were on friendly terms. (Photo dated 1977) Religion News Service file photo

Luwum was a parish priest from 1956 to 1969, when he was elected to serve the bishop of Northern Uganda diocese. In 1974, he was chosen Archbishop of Uganda and served Burundi, Rwanda and Democratic Republic of Congo (then Zaire), in addition to Uganda.

Amin was particularly hostile toward Christianity and tried to turn Uganda into a Muslim state, wrote Henry Kyemba, author of “A State of Blood.”

Ugandan-born Archbishop John Sentamu of England delivered the sermon at Monday’s memorial. He said he met Luwum when he was posted in Gulu town as a magistrate. Luwum challenged him to use his position to bring justice to a country where prisons were filled with people wrongfully accused.

“We must be Christ to his people,” Sentamu said Luwum told him. “‘Take up their cases.'”

News
Gene Robinson, 1st gay bishop in US, remembers Tutu’s generosity
Follow us on Facebook!
Submit your photos to RNS