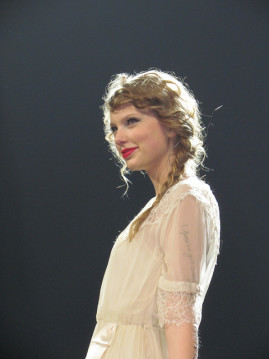 One of my favorite poems is Ash Wednesday by TS Eliot. It's long and full of images, and I try to read it every year on Ash Wednesday, which happens to be today, and which got me thinking about another TS I love: Taylor Swift. Could it be that her lyrics and Eliot's poem would make the perfect mash-up?

Now, I've never seen Taylor Swift and TS Eliot in a room together, which is pretty fishy since they obviously run in the same circles. Plus there's the coincidence of the initials: TS Eliot? Taylor Swift Eliot?

Have we been duped all along into believing this incredibly gifted wordsmith was really two people? Let's take a look at the poem:

Okay, that's a little strange, but it could just be chance? Let's continue...

Because I know that time is always time
And place is always and only place
And what is actual is actual only for one time
But I've got a blank space, baby
And I'll write your name

No place of grace for those who avoid the face
No time to rejoice for those who walk among noise and deny the voice
Will the veiled sister pray for
Those who walk in darkness, who chose thee and oppose thee,
'Cause I knew you were trouble when you walked in
So shame on you now-ow
Flew me to places I'd never been
Til you put me down

We are glad to be scattered, we did little good to each other,
We are never, ever, ever getting back together

As a final piece of evidence, I would like you to consider that "Taylor Swift" is an anagram of "Farts It Yowl," and we all know J. Alfred Prufrock was a flatulent fellow. So, the investigation draws to an end. The Pulitzer committee knows where to find me.