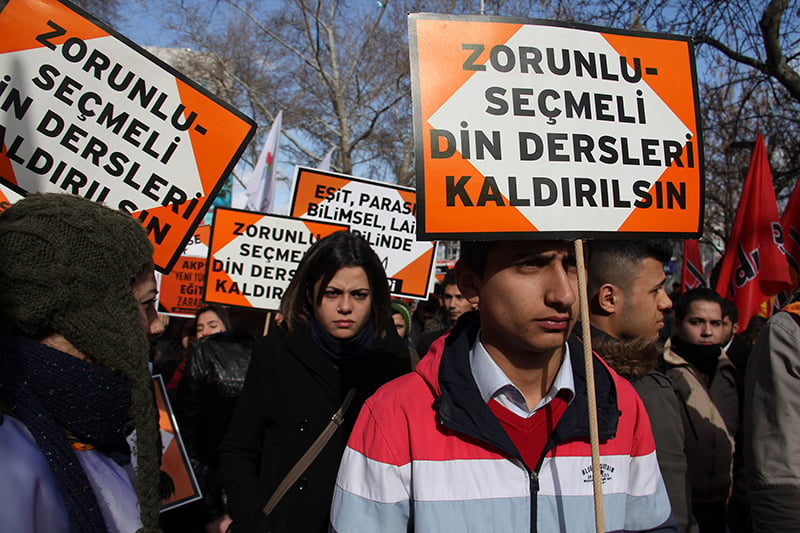 The Alevi are the second-largest religious community in Turkey, comprising as many as 15 million people who adhere to a mystical branch of Islam that broke off from the main Sunni majority.

“This is a forced course about the Sunni sect,” said Ali Kenanoglu, chairman of the Hubyar Sultan Alevi Cultural Association.

Christians and Jews are exempt from compulsory Islamic courses because Turkey recognizes them as religious minorities. But atheists, agnostics and Alevi adherents are unrecognized and therefore come under the state-sponsored Sunni umbrella, religious rights advocates say.

Technically, Turkey is a secular republic. But since 2003, when Recep Tayyip Erdogan became prime minister under the banner of the Justice and Development Party, the government has been implementing policies that critics say are designed to transform Turkey into a more conservative Islamic society.

Public education has become a symbol of the tug of war between Turkey’s secular tradition and the rising religious tide.

On Feb. 13, secularists and religious minorities called a one-day school boycott to protest the introduction of compulsory religion classes in primary schools.

Police responded by cracking down on demonstrations in cities across the country, using pepper spray and water cannons. They detained activists and filed charges against protest leaders for insulting the Turkish president.

“This is a clear application of the police-state and dictatorial regime,” Kenanoglu said. “But these anti-democratic applications can’t change the truth. This will not make us fear, but work even more.”

The one-day boycott was also in response to the state’s expansion of religious secondary schools, or “Imam Hatip” institutions. Traditionally designed to train state-employed imams, the schools have expanded rapidly since the Islamic-rooted Justice and Development Party came to power.

Enrollment in Imam Hatip schools has skyrocketed from 65,000 students to nearly 1 million, Erdogan said in a speech at the opening of an Imam Hatip in Ankara.

The Education Ministry’s program of converting secular high schools into Imam Hatip institutions has left many students with little option but to enroll in religious education.

In September, the European Court of Human Rights in Strasbourg ruled against Turkey forcing religious education on students, but Erdogan remains defiant.

“This is an incorrect ruling and there is no similar example in the West,” Erdogan said in a speech immediately after the court decision. “The mandatory physics classes, the mandatory chemistry classes are not sources of debate anywhere around the world. But everybody talks about the religious courses.”

Critics of the government say the expansion of religious schools is an experiment in social engineering.

“We wanted to draw attention to the fact that the Justice and Development Party is using our children for its own ideology,” said Kamuran Karaca, president of the left-wing Egitim Sen teachers union, which helped organize the recent boycott.

Karaca said the government is opening more than twice as many Imam Hatip religious schools as traditional secular schools. “This is a political project for creating a religious generation,” he said. “They are forcing students to learn Arabic, the Quran and its interpretation in Sunni Islam.”

The upshot is that families are finding there are often few alternatives for their school-age children aside from religious schools.

Cem Sarikaya, a 15-year-old high school student who grew up in the Eyup district of Istanbul, didn’t have high enough grades to enroll in a nonreligious school in Istanbul.

His only option — aside from a religious education — was enrolling 200 miles away in the city of Eskisehir in the Anatolian heartland.

“All the schools in our district Eyup have been transformed into Imam Hatips,” said his mother, Hulya Sarikaya, a 40-year-old who earns her living as a textile worker.

“There are no normal schools left here,” she said. “So we are either forced to send our child to Imam Hatips, or to schools far away.”

But even sending her son away wasn’t enough.

“We don’t want our child to get a mandatory religion class,” said his father, 41-year-old Selami Sarikaya. “But now, in his high school in Eskisehir, we learned that he was forced to choose all religious electives. He has a total of four religion classes now.”

The couple are pulling him out of the state-run school and plan to enroll him in a private high school at an annual cost of 4,000 Turkish lira (or $1,630), said his father, an auto mechanic.

The expense is part of the cost of holding to their principles.

“We don’t consider ourselves religious — we come from an Alevi family background but we identify ourselves as atheists,” said Selami Sarikaya. “We don’t like this situation at all. We want these classes to be optional — the ones who want to take it can take it, but nobody should be forced.”

News
Black skeptics find meaning in uplifting their community through social justice
News
Turkey’s president formally makes Hagia Sophia — a former cathedral — a mosque
Opinion
President Erdogan, preserve Hagia Sophia as a church
News
‘I have to find the Mecca of my heart’: Muslims grieve as hajj is drastically limited
Coronavirus
Coronavirus restrictions on mosques bring women to the fore