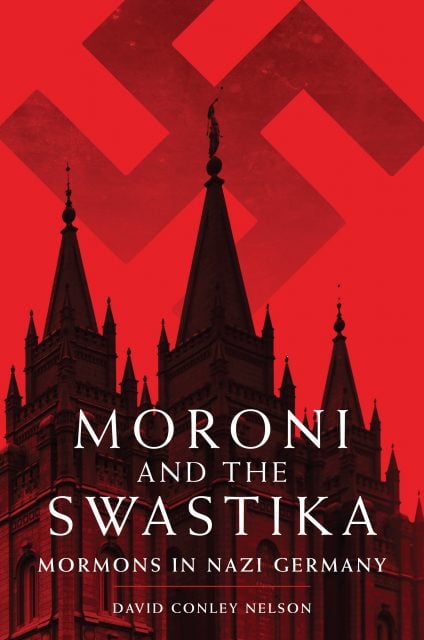 David Conley Nelson has spent years researching the LDS Church during the Third Reich, resulting in the new book Moroni and the Swastika: Mormons in Nazi Germany.

Though it’s not officially out until February 26, the book will be launched Sam Weller’s in Trolley Square, Salt Lake City, tomorrow evening.

It’s not right to say I “enjoyed” this book, because it was disturbing to discover how deeply some Mormons bought into Nazi ideology. But it’s required reading for anyone interested in Mormon history and the larger question of a religion’s responsibility to procure justice for the oppressed – even when it means putting that religion’s own institutional advancement at risk. — JKR

RNS: You note in the book that Mormons in the 1930s were not just tolerant of Hitler but downright enthusiastic about his policies, including things like getting rid of brothels and passing laws against homosexuality. Why were Mormons such strong supporters of Nazism?

David Conley Nelson: Ordinary Mormons were ordinary Germans. Hitler was very popular, so they supported the government. There’s nothing unusual about that. But also, the LDS mission presidents recognized the vulnerability that an American-led church had under this dictatorship, and they put together a program to formalize the church’s support of the government. By doing so, they resurrected the 12th Article of Faith, which the Mormons had not obeyed before during their history of missions in Germany. Between 1851 and 1918, Mormons had been banned in a lot of the German states, so to get around that they would register as English teachers, students, or commercial developers instead of as missionaries.

So in the 1930s the mission presidents formulated this program to keep the church safe, but then found opportunities that were too good to pass up, especially in genealogy. In the past they had been banned from German archives because pastors did not want their records used to baptize the dead as Mormons. But during the Reich, suddenly all these ordinary Germans had to prove their ancestors were not Jews, so the Church’s genealogy program experienced newfound freedom. By the time Nazi Germany was in full swing, just about every branch had a genealogical president, two counselors, and a secretary.

The shocking thing is that there seemed to be very little sensitivity to the racial reasons for genealogical research. Newspaper articles would appear in the Deseret News, bragging about how much success the Church was having in Germany with the new government. The same newspaper was also running AP articles about the plight of the Jews. So the Church knew what was going on in Germany, but emphasized cooperating with the Third Reich.

RNS: One of the sadder stories in the book is of LDS First Counselor J. Reuben Clark, whose anti-Semitism seems to have been off the charts. Even after the war, he was still handing out copies of the anti-Semitic tract “The Protocols of the Elders of Zion.”

Nelson: Mike Quinn says it best: J. Reuben Clark was an anti-Semite, but it was an anti-Semitism fueled by the xenophobia and nativism of the Progressive Era. Through his legal and business work Clark had the conflicting view that Jews were Communists on the one hand, but that they also embraced capitalism and were cheating in their businesses. I’ve seen no evidence that he changed his mind about Jews after the war.

RNS: In the final portion of the book you lay out the case of teenage activist Helmut Hübener, one of the few Mormons who opposed the Third Reich (and was ultimately executed for it). Was Hübener motivated by a desire to save the Jews?

Nelson: No. I have not found in the writings any evidence of his being philosemitic or ever denouncing what was happening to the Jews. Although Hübener can be considered an idealist, I think he saw the Jewish question as one where he could never persuade people. So many Germans were in agreement with Hitler about the Jews that he would have instantly lost his credibility with his German audience. I don’t think he was anti-Semitic, but he was pragmatic.

Hübener was motivated more by what he saw as Hitler’s influence coming into his own branch, the St. Georg branch in Hamburg, where the branch president and first counselor were Nazi enthusiasts and others were members of the SA and SS.

RNS: It seems plausible that after WWII, Mormon leaders would want to be seen as embracing Hübener’s story, but you note in the book that the Church actually suppressed a play and other writings about Hübener until the 1990s.

Nelson: Hübener is what I call the consummate memory beacon. He was someone whose story could be brightened or dimmed according to what was needed at the time after the war.

When the play originally happened at BYU in the tumultuous 1970s, there were some sensitivities. Some within the LDS hierarchy worried that Hübener’s story would motivate young Mormons in South America to rebel against their own governments.

Also, there was sensitivity at home. Some 4,000 German Mormons had emigrated after the war. Most of those people had suffered in the war, but some of them were perpetrators whose hands were dirty. Many didn’t like the Hübener story, because they embraced the 12th Article of Faith as justification for what they had done in the war: Good Latter-day Saints help the government and trust in God. They saw Hübener as a traitor.