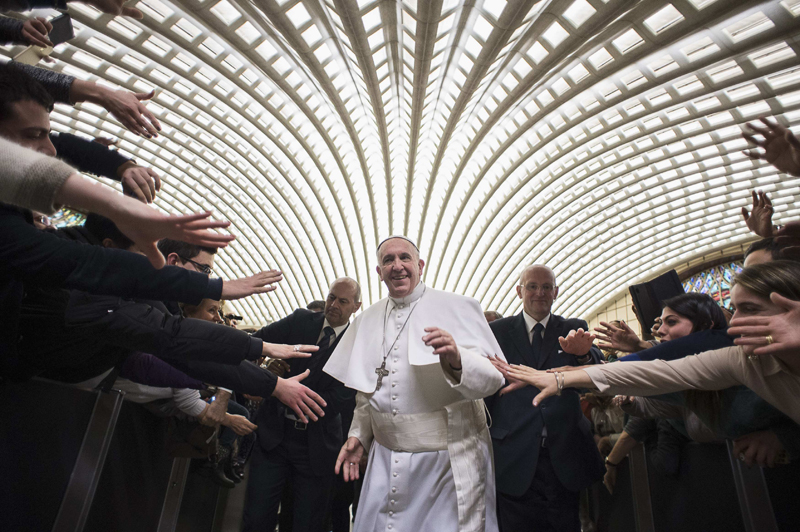 Pope Francis arrives to lead a special audience with faithful from Cassano alpo Jonio diocese at the Vatican on February 21, 2015. Photo courtesy of REUTERS/Osservatore Romano
*Editors: This photo is not available for republication.

(Reuters) Pope Francis urged members of Italian organized crime groups on Saturday to repent, saying the Catholic Church would welcome them if they promised to stop serving the cause of evil.

He spoke during an audience at the Vatican for pilgrims and anti-crime activists from the southern region of Calabria, home to the ‘Ndrangheta, mainland Italy’s equivalent of the Sicilian Mafia.

“Open your hearts to the Lord. The Lord is waiting for you and the Church will welcome you if your willingness to serve good is as clear and public as your choice to serve evil was,” he said.

When he visited Calabria last June, he accused organized crime groups of practising “the adoration of evil” and said members had excommunicated themselves from the Church by their actions.

The ‘Ndrangheta, which makes most of its money from drug trafficking, has spread from Calabria to northern Europe and North America. A 2013 study by Demoskopia, an economic and social research institute, estimated the ‘Ndrangheta’s annual turnover at some 53 billion euros in 30 countries, equivalent to about 3.5 percent of Italy’s total official economic output.

It has been much harder for investigators to combat than the Sicilian Mafia because its structure is more lateral than hierarchical and its tightly-knit families are harder to penetrate.