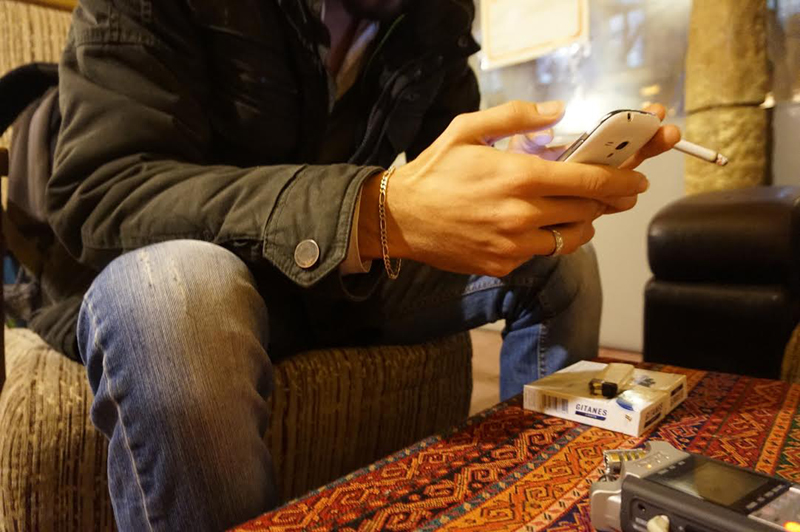 In a cafe in the southern Turkish city of Gaziantep, Zaid AlFares, a journalist from Raqqa city, tells about life under the Islamic State group. Religion News Service photo by Michael Kaplan

SANLIURFA, Turkey (RNS) Hassan, a chain-smoking 20-year-old from Syria, sits in a cafe across the border from his homeland, one of thousands who escaped the clutches of the Islamic State group.

Not so long ago, he was one of their recruits, having undergone four months of religion training where he learned how to pray and read the Quran, while at the same time patrolling the rebel stronghold’s checkpoints.

“We loved them so much,” said Hassan, who was not willing to be identified by his real name for fear of retribution against family members still in Syria. “They gave us so much information and taught us very sweet things about Islam.”

But then things started to change.

As the Islamic State group grew in power, he saw more orders to target members of other widely popular Sunni rebel groups. At checkpoints, Hassan said, recruits were commanded to arrest or kill any members affiliated with the Free Syrian Army, an umbrella of rebel groups that he and his family supported.

His mother, who was growing increasingly disgruntled with the Islamic State’s strict rules, confronted him. “‘Why are you doing this?'” he said she told him. ‘”This is wrong.'”

It wasn’t long after, as intense fighting broke out with another Islamist brigade, Ahrar ash-Sham, that Hassan decided to stop fighting for the Islamic State.

The group, he said, seemed to have lost its purpose in its fighting the Syrian regime. It also lost its touch with the locals.

Little is known about how the Islamic State group is viewed by those living under its thumb. But as it conquers new land and expands into contested territories, a steady stream of refugees settling in southern Turkey offers a peek into life in the areas the militants control.

These refugees say the group’s success in establishing order, which at first won local support, has since been overshadowed by continued brutality — widely seen as out of touch with local Muslim tradition — which in turn has fostered resentment and anger.

“At first they did have some support,” said Ahmed Saleh, a former imam in the Syrian city of Deir az-Zor. “But their very kind and compassionate statements in the beginning disappeared with their intolerant and unjust behavior.” 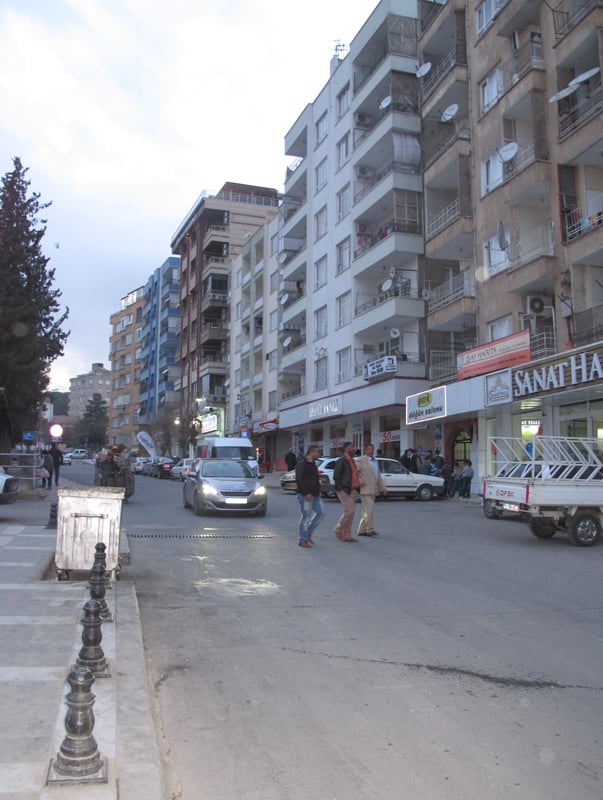 Hundreds of thousands of Syrians live in the southern Turkish city of Sanliurfa, many of them from areas in Syria now under control of the Islamic State group. Religion News Service photo by Michael Kaplan

Cities along Turkey’s southern border are teeming with refugees these days. Many of the 500,000 refugees living in Sanliurfa, a city of about 1.8 million people, come from northeastern Syria, much of which is now under control of the Islamic State.

Among them are former fighters who fear that the militant group would target them because of their affiliation with other political movements, as well as civilians who fled areas held by other rebel groups amid bombardment by the Syrian regime.

Some have integrated into Turkey, which has open checkpoints, by establishing Syrian restaurants and political organizations.

“They don’t understand Islam as we the Syrian people understand it,” Saleh said of the Islamic State group, noting that much of its leadership and many of its fighters hail from Iraq, Saudi Arabia, Tunisia and elsewhere.

“Punishing people shouldn’t be a goal,” he said, adding that the Islamic penal code is to be waived during times of unrest. He noted that there were very few stonings during the Prophet Muhammad’s time as leader and that it was most often the guilt-ridden individual, and not the prophet, who wanted to carry through with the punishment.

After leaving the militant group, Hassan settled in Raqqa, the Islamic State’s de facto capital in Syria, to live as a civilian. But he found it difficult to conform to rigid new rules.

He shared a picture on his cellphone of lash marks on his back oozing with blood from a time he was caught smoking a cigarette in his mechanic’s shop. Another time, he was thrown into a dark jail cell and beaten after a passer-by spotted and reported him to al-Hisba for sitting next to a woman (al-Hisba informants earn a $50 reward).

Then, one day, Hassan returned to his shop to find it padlocked after leaving it open during prayer time. That’s when he decided it was time to leave.

Under the Islamic State group, getting caught with alcohol is punishable by 80 lashes and cigarettes by 40 lashes. Women, who must be accompanied by a male chaperone in public, are required to wear black, Saudi-style veils with an extra layer on top — locally referred to as “body armor.” Men must grow their beards and raise the hem of their pant legs so that they hang above their ankles, in conformity with a particular Islamic practice.

More serious crimes — ranging from homosexuality to rebellion against the state — are referred to judges with powers to hand down harsh corporal punishment, including stoning, amputations and beheadings.

Public executions are reportedly a weekly occurrence in Raqqa these days.

Many of the Islamic State group’s laws are rooted in a literal reading of the Quran that ignores the rich scholarly tradition that has developed around it.

Aside from narrations believed to be passed down from the Prophet Muhammad, called the hadith, no other sources from Islam’s vast legal tradition are taken into account when determining a judicial verdict or passing laws.

According to one Syrian journalist from Raqqa, the Islamic State realized early on that it would come into conflict with local religious leaders for its simplistic understanding of Islam. “The first act of the Islamic State was to kill the people with knowledge of religion,” said the man, who writes under the alias Zaid AlFares.

Those who endorse a conflicting understanding of Islam, including those affiliated with competing rebel groups, are ruled apostates, due to leader Abu Bakr al-Baghdadi’s self-proclaimed title as caliph — the spiritual and political leader of Muslims.

Saleh thinks the Islamic State’s day in the court of public opinion might be approaching.

“If the people of Raqqa and Deir az-Zor believed that help was on the way,” he said, “there would be a revolution in no time.”