Ruth Messinger, president of American Jewish World Service, participates in a symposium on “Proselytism and Development in Pluralistic Societies,” held by the Berkley Center at Georgetown University on Wednesday (March 4, 2015). Photo courtesy of Rafael Suanes/Georgetown University

Not so, say Pastor Rick Warren, who has led Saddleback Church to donate millions of dollars and hours of labor in Africa, and Ruth Messinger, president of American Jewish World Service.

The two were keynote speakers at a discussion on “Proselytism and Development in Pluralistic Societies,” sponsored by the Berkley Center for Religion, Peace & World Affairs, at Georgetown University.

Both acknowledged at the Wednesday (March 4)  event that their motives — “living like Jesus,” said Warren, and “pursuing justice,” said Messinger — are questioned.

Rebecca Shah, a research fellow at the Berkley Center who moderated the session, began with examples such as a Hindu nationalist leader in India who claimed Mother Teresa’s hidden motive in aiding the dying was a desire to convert them to Christianity.

Katherine Marshall, a senior fellow at the center and former World Bank aid expert, said, “The first words out of many mouths are ‘Hezbollah, Muslim Brotherhood and Hamas’” — all groups that mix Islamist politics with various development projects.

Messinger observed that the Jewish people had been on the “wrong end” of religious coercion for millennia.

The way to avoid it is to pay attention to the power dynamic, she said.  She starts with guidance from the “most commonly said Jewish prayer, the Shema, which begins with the Hebrew word ‘listen.'”

That shifts the power  to the developing community, not the aid agency with its material resources and outsider ideas. “People should never have to feel they must abandon some belief or adopt some new behavior to continue getting help,” she said. 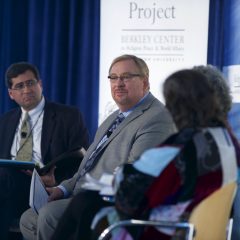 Pastor Rick Warren participates as one of the keynote speakers at a symposium on “Proselytism and Development in Pluralistic Societies,” held by the Berkley Center at Georgetown University on Wednesday (March 4, 2015). Photo courtesy of Rafael Suanes/Georgetown University

Warren, who has led evangelical churches into development work through his P.E.A.C.E. initiative, agreed emphatically.

“All compassion should be without strings. If it is not unconditional, then it’s not compassion,” said Warren, who works with aid agencies of all faiths on common ground issues, such as health care.

But, Warren argued, all actions have a motivation and no one should be “the motive police.”

Saddleback stepped up, particularly in battling AIDS in Africa, “because we love Jesus,” Warren said.  “I believe in sharing what I deeply hold. Jesus told me to share the good news, and I believe in both the good news and the common good and that we can keep them both in balance. … I don’t believe in coercion, but I do believe in persuasion. Everybody is trying to persuade everybody else — but it has to be fair.”

Messinger immediately countered: “What’s fair when one group (the development agency) has all the money and power?”

She gave a poignant example of how a failure to pay attention to the help people say they need most can lead to good intentions going astray.

Insecticide-laden fine-mesh bed nets distributed to poor villages to ward off malaria-carrying mosquitoes are used instead for fishing nets by people who were more desperate to feed their children than to prevent disease.

Yet, no one knows whether fish caught in those nets will be harmful to eat, and the fine-mesh scours the waters, scooping up other fauna and flora essential to the ecology. 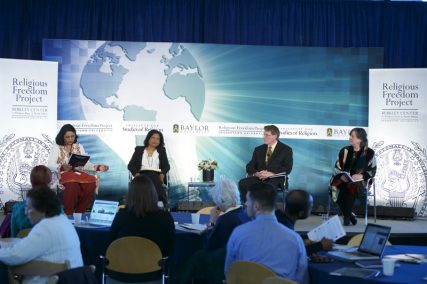 From left to right, moderator Rebecca Shah, a research fellow with the Berkley Center; Asoka Bandarage, a member of the steering committee for Interfaith Moral Action on Climate; Kent Hill, senior vice president of World Vision; and Katherine Marshall, a senior fellow at the Berkley Center, participate in a panel discussion at Georgetown University on Wednesday (March 5, 2015). Photo courtesy of Rafael Suanes/Georgetown University

She called for everyone to combat greed and selfishness in their own lives as a step toward facing down corruption in underdeveloped nations.

“If you don’t address the root causes of conflict and poverty, you aren’t serving people,” said Hill. “Religious groups have something to say to greed, sin and conflict in this world.”

While coercive use of the assistance to spread the faith is always wrong, Hill said, “converting people from selfishness to a concern for the common good is a form of proselytizing, too.”

Signs of the Times
Public funding of religious schools is coming. The first lesson is compromise.
Follow us on Facebook!
Submit your photos to RNS