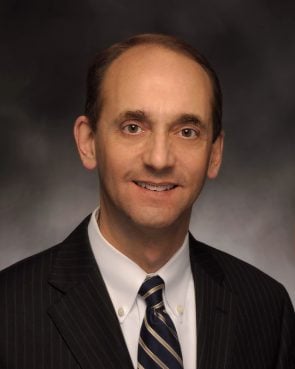 Events surrounding the apparent suicide of Tom Schweich, Missouri’s Republican state auditor and a contender for the governor’s office, have left some grappling with the connection between anti-Semitism and state politics. Photo courtesy of Missouri State Auditor’s Office

ST. LOUIS (RNS) Events surrounding the apparent suicide of Tom Schweich, Missouri’s Republican state auditor and a contender for the governor’s office, have left some grappling with the connection between anti-Semitism and state politics.

Kenneth Warren, a professor of political science at St. Louis University, said he has no doubt that Jewish candidates face greater obstacles when running for statewide office in Missouri.

“All other things being equal, if you’re running statewide it would be better to be non Jewish,” Warren said. “It’s certainly not going to be a help.”

That view isn’t universally held among political experts in the state. Some, including Jewish elected officials, say Judaism isn’t an impediment to political success.

But for others, the disadvantages of being a Jewish politician are tangible. And they’re amplified for statewide candidates who must win over rural voters with little exposure to the faith.

Just before his apparent suicide, Schweich had planned to discuss with reporters his accusation that John Hancock, Missouri GOP’s new chairman, had mentioned to others that he was Jewish.

Schweich felt the comments were anti-Semitic and were designed to hurt him politically. In fact, Schweich was an Episcopalian, but he had said his grandfather was Jewish.

Spence Jackson, Schweich’s spokesman, has said that of all the recent political tension, including a negative ad that compared him to Barney Fife from the Andy Griffith Show, “it was the comment about the Jewish faith, the Jewish history of his family, that had hurt him the most.”

Hancock, for his part, has said any references to Schweich’s faith weren’t meant to be disparaging.

“The only reason for going around saying that someone is Jewish is to make political profit from religious bigotry,” Danforth said.

Other recent tragedies in Missouri have been linked to anti-Semitism.

Last year, Kansas City experienced a triple killing at a Jewish community center and retirement complex on the eve of the Jewish festival of Passover. Frazier Glenn Miller, the man accused of the killings, was known for his fervent anti-Semitic views and shouted “Heil Hitler” at television cameras during his arrest after the shootings.

The number of anti-Semitic incidents in Missouri increased after the tragedy, according to Karen Aroesty, regional director of the Anti-Defamation League. In 2013, there were two reports of anti-Semitic episodes in Missouri. In 2014, that number jumped to 11.

Nationally, the number of anti-Jewish crimes decreased, from 868 in 2012 to 625 in 2013, according to Federal Bureau of Investigation statistics. The FBI reported, however, that 60 percent of the reported religion-based crimes were directed against Jews and Jewish institutions.

Political scientists admit, however, that because of the decline of anti-Jewish sentiment since the end of World War II, Jewishness is nowhere near the political handicap that it once.

They also cautioned that other racial and religious minorities — such as African-Americans and Hispanics — may face the same kind of political uphill battles.

“Unquestionably, the bottom line is that people tend to vote more for people that have traits like their own and against people who have traits dissimilar to their own because they feel more uncomfortable with them,” Warren said.

In fact, Warren and other experts say the biggest political barrier in Missouri isn’t religion, but the divide that exists between urban and rural communities.

“As you’re developing a biography to run statewide, you want to have as part of that biography that you are not solely urban bred,” said Terry Jones, a political science professor at the University of Missouri – St. Louis.

Or as David Robertson, a political science professor at the University of Missouri – St. Louis, puts it, “I don’t see decisive evidence that a Jewish background has been an impediment on its own.”

‘What’s in your heart’

In certain circumstances, however, a Jewish faith, as well as ties to an urban region, can actually work in a candidate’s favor. Missouri state Rep. Stacey Newman, D-St. Louis, for example, represents Clayton, University City and Ladue, areas with a heavy Jewish population.

Still, Newman said a Jewish female politician can feel lonely in the Missouri House of Representatives.

Sen. Jill Schupp, D-Creve Coeur, said she’s been disturbed by proposed legislation that “has tried to advance the cause of Christianity over other religions.”

But St. Louis County Assessor Jake Zimmerman, a Jewish Democrat who is running for Missouri Attorney General, said he feels confident about his chances in next year’s elections.

“I wouldn’t say it’s an obstacle at all,” Zimmerman said about his faith. “I have found people across the state are interested in the character of the people who represent them.”

“They want to know what’s in your heart.”

“Many people with deeply held Christian beliefs feel a very strong tie with the state of Israel,” Zimmerman said. Zimmerman noted that he did not believe Hancock’s comments were meant to harm anyone.

“I wear who I am on my sleeve,” Zimmerman said. “I don’t think it makes any sense in this business to run from who you are. I think voters value authenticity.”

(Lilly Fowler is the religion reporter for The St. Louis Post-Dispatch. She can be reached on Twitter at https://twitter.com/LillyAFowler.)