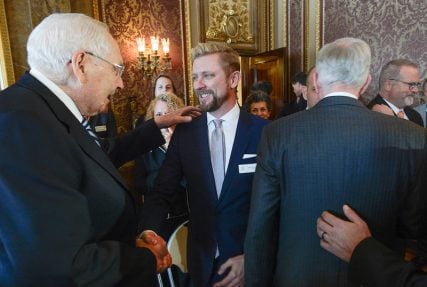 Progress! This week a bill banning discrimination against LGBT Utahns passed the state legislature’s first hurdle, as Business and Labor Committee members voted unanimously to allow the bill to be decided upon on in the full Senate. That vote was expected today but had not occurred as of press time.

(The Mormon News Report has a great summary of all the news coverage here, with links to half a dozen articles, if you want to learn more about the specifics.)

The bill is viewed as historic because both the LDS Church and prominent members of the LGBT community worked together to iron out its details, and both sides say they had to compromise. That photo above of Elder Tom Perry of the LDS Quorum of the Twelve with the ab fab Troy Williams, executive director of Equality Utah? I never thought I’d see the day when those two were shaking hands and beaming about the same legislative measure. That’s huge progress.

But the devil’s in the details. If this becomes law, what will it look like for LGBT people in Utah? And what do its “religious freedom” exemptions mean for Utahns who don’t support gay rights?

We’ve seen these questions come up quite recently with the suspension of Salt Lake City police officer Eric Moutsos, who resigned last June after requesting reassignment during the Gay Pride parade. Moutsos, a devout Mormon, said last week he would have been happy to provide protection during the event but did not wish to participate in a choreographed motorcycle celebration, as he was assigned to do. That, he suggested, made it appear like he was celebrating Gay Pride himself, which he does not advocate.

“I felt that by being an actual participant in the parade, I would be perceived to be supporting certain messages that were contrary to who I am,” he told KSL. “I will protect their parade. But I just don’t want to be in the parade.”

Would Mr. Moutsos have the right to decline to participate in such an assignment under the new Utah law?

Probably not, since Moutsos was employed by the city. But the Utah bill offers robust exemptions for religious groups, the Boy Scouts of America (which is heavily affiliated with the LDS Church in Utah) and even some private businesses. According to ThinkProgress.org,

The private business issue relates to a question that guest blogger and attorney Bryndis Roberts raised here two weeks ago: would the free exercise of religion give a baker or dressmaker permission to deny service to a gay couple who wanted a wedding cake or gown, for example?

So it’s not a slam dunk for LGBT rights, but it’s major progress for Utah. More details will likely be hashed out long after the bill becomes law, as it presumably will. On March 16 I’ll be attending a Brookings Institution simulcast that features an A-list lineup of legal experts, politicians, and human rights advocates, all addressing the question, “Gays, Mormons, and the Constitution: Are there win-win answers for LGBT rights and religious conscience?”I hope to learn more about the relevant issues and questions as they unfold.