(RNS) A national atheism advocacy organization that has enjoyed support from prominent nontheists, including Richard Dawkins, is now mired in a financial scandal.

We Are Atheism, co-founded four years ago by then-University of Kansas student Amanda Brown and her husband, Adam Brown, is facing questions about mismanaged donations and misrepresentation of its tax-exempt status. 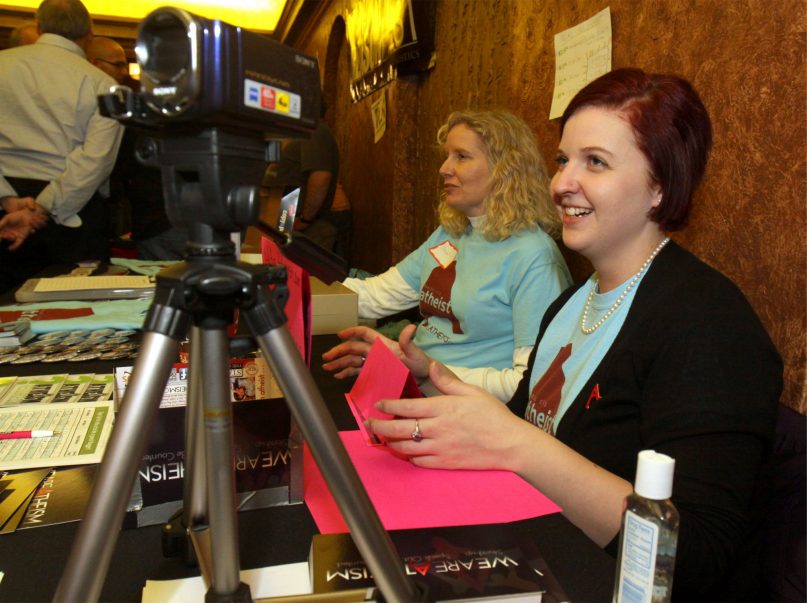 Amanda Brown, right, and Sarah Nessel of Kansas City, Mo., talk to visitors of the Kansas City Atheist Coalition’s table at Skepticon in Springfield, Mo., as part of Brown’s “We Are Atheism” campaign. Religion News Service photo by Mark Schiefelbein

The most serious charge involves claims that donations made to the organization before May 2013 would be tax-deductible; the group did not receive its 501(c)(3) nonprofit status from the Internal Revenue Service until October 2014.

The allegations against the group have been percolating for more than a year and were made public last week by Hemant Mehta on his popular Friendly Atheist blog.

“I now believe there’s serious mismanagement within the organization that should concern anyone who’s ever given money (or is considering giving money) to them,” Mehta wrote.

We Are Atheism is best-known for a series of videos that feature famous as well as rank-and-file atheists “coming out” about their lack of belief in God or religion. Since late 2012, the group has also raised relief money in the wake of natural disasters and tragedies, including the Sandy Hook school shootings in Connecticut and the Boston Marathon bombing. 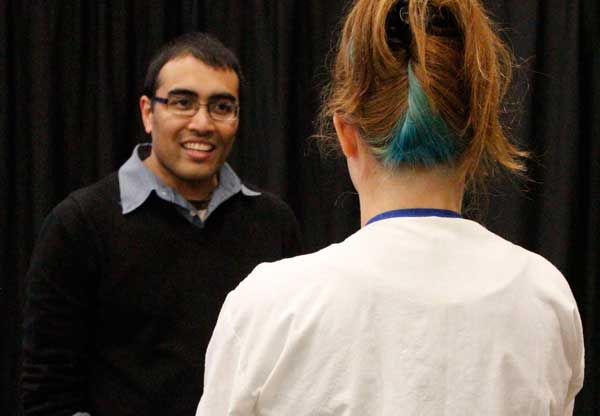 Hemant Mehta gives advice to a 13-year-old atheist who wants to start a group at her school, but has faced criticism from friends and classmates for her beliefs. Religion News Service photo by Kellie Moore

And that’s where much of the trouble started.

According to Mehta, who examined We Are Atheism’s public financial statements, the organization’s current website and archived copies of the website, the group was not registered as a tax-exempt nonprofit with the IRS when it was soliciting what it said would be tax-deductible donations in 2012 and early 2013.

In reality, the group did not apply for tax-exempt status until 2014. The IRS permitted the tax-exempt status to be retroactive to the group’s date of incorporation in May 2013. But donors who gave gifts to We Are Atheism before then were advised to “make adjustments on your taxes” as those donations are not tax-deductible.

“Someone was lying to the government,” Mehta wrote on his blog. “Was it the donors who unknowingly took tax write-offs? Or was it We Are Atheism for claiming donations to them would be tax-deductible even though they weren’t?”

We Are Atheism also stated on its website that all donations — “100%” — would be used for disaster or tragedy relief or go into its general fund. The group listed seven things the general fund would be used for, including marketing and travel expenses. No donation money was to be used for salaries since the group is run entirely by volunteers.

Yet the group’s 2013 financial report shows that $9,500 was paid out in salaries. Brown told Mehta the group’s general fund was used to give her “a smidgen of money to live off of so I could make sure my daughter had a place to live, food to eat, and clothes to wear.”

The same report also shows contradictory figures for donations raised and paid out to victims of Sandy Hook, the Oklahoma tornado and the West, Texas, fertilizer explosion, all of which We Are Atheism solicited donations for through its Atheists Giving Aid program.

For example, the organization’s documents say We Are Atheism raised $30,000 for Sandy Hook. The group initially reported it gave out $25,500 to various charities, including the Newtown Memorial Fund. But the 2013 income and expense report states that the organization raised a little over $22,000 in the wake of the shooting.

In addition, the group’s records indicate that in some cases, donated funds were given to people beyond the disasters or tragedies the money was solicited for. In one case, Brown gave donated funds to a homeless family she met at an atheist gathering, and in another, she gave funds to two victims of identity theft.

“To be sure, these stories are all heartbreaking,” Mehta wrote. “But the Browns were using money that was earmarked specifically for victims of the tornado (and fertilizer plant explosion) to help an entirely different group of people.”

Brown has stepped down from her position as treasurer of We Are Atheism and is no longer authorized to speak for the group she founded.

Lee Moore, the group’s president, has issued a statement promising greater transparency in the future. He said We Are Atheism has hired an accountant to comb through its financial records for further discrepancies.

Mehta was tipped off to financial discrepancies at We Are Atheism by an anonymous whistleblower known only as “Mark Felt,” the real identity of the Watergate informer known as “Deep Throat.” Other atheists, including philanthropist Todd Stiefel, a major donor to atheist organizations and causes, had similar concerns.

At this point, no criminal charges are being brought against Brown or anyone else at We Are Atheism. The general consensus in the atheist movement seems to be that the Browns had good intentions but were in over their heads.

Mehta said he has received some criticism for going public with his findings. He said there is concern that the group’s problems will be a “black eye” on the atheist community, which already has an image problem — atheists consistently rank among the least trusted “faith group” in the U.S.

But Mehta sees it as more of an opportunity than a smear.

“Churches don’t have to do this,” he said, referring to disclosing how their donations are spent. “If this was a church we would never find out where the money went. But we have that luxury in our movement to hold our members accountable.”

Moore, too, wants this to be an opportunity to show how atheists can be a force among charitable organizations.

“I wanted us to be a shining beacon for how this is to be done,” the group’s current president said. “I want to know every single mistake that was made and I want to correct it.” 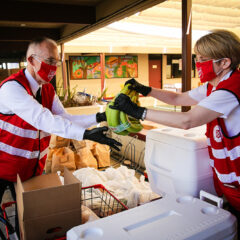 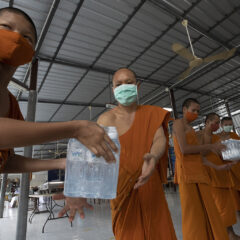 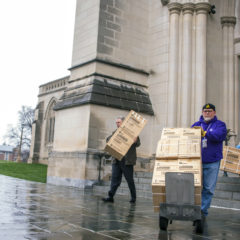 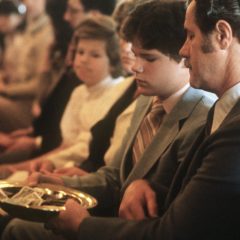 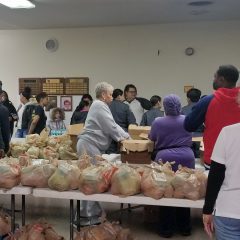