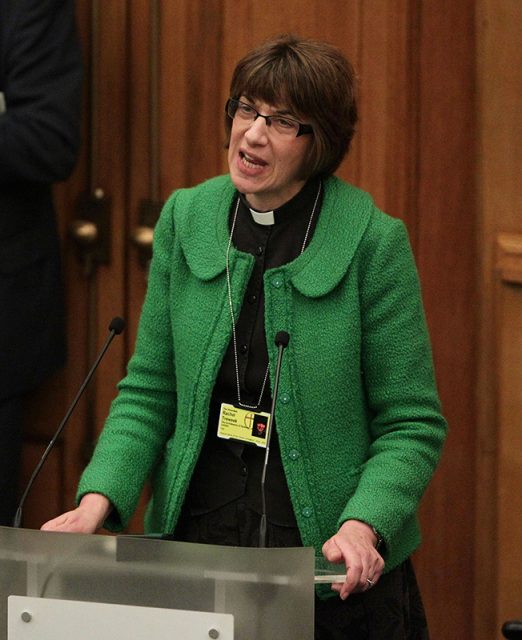 Rachel Treweek, the archdeacon of Hackney, speaks during a meeting of the General Synod of the Church of England at Church House in central London on Nov. 21, 2012. Photo courtesy of REUTERS/Yui Mok/Pool
*Editors: This photo can only be republished with RNS-ENGLAND-BISHOP, transmitted on March 26, 2015.

CANTERBURY, England (RNS) The Church of England’s commitment to advance the cause of women took another step forward Thursday (March 26) with the appointment of Rachel Treweek, 52, as the next bishop of Gloucester in the southwest region of England.

That makes three women bishops in the space of three months since the church overcame its long-standing opposition to women bishops late last year. On Wednesday, the church appointed its second woman bishop, Alison White, 58, as suffragan bishop of Hull.

But Thursday’s announcement was even more dramatic. Treweek will be the first to run a diocese on her own. She will be one rank below archbishop and will become the first woman bishop to sit in the House of Lords, the British Parliament’s Upper House.

Twenty-six “Lords Spiritual” — all Anglican, all male — sit in the House of Lords.

In a statement, Treweek said the appointment was “an immense joy and privilege.” She said she wanted to use her new position to speak up for those who are marginalized and to be “a compassionate voice that speaks into lives and places which are hurting.”

Treweek will be enthroned at Gloucester Cathedral later this year.

The announcement came on the same day that King Richard III was reinterred at Leicester Cathedral, at a ceremony led by Anglican Archbishop of Canterbury Justin Welby.

Before Richard became king of England, he was known as the Duke of Gloucester.

Treweek has been a member of the church’s General Synod, its governing body, since 2010 and is married to a priest in the Diocese of London.

The General Synod approved plans late last year to ordain women bishops after years of division and in the face of stiff opposition. In January, Bishop Libby Lane was consecrated as suffragan bishop in the Diocese of Chester.