But what’s up with the naked praying guy on the beach? Here’s a closer look at some of the strands of fact winding through this fanciful series, which airs Thursday nights at 10 EDT. A photograph of the War Scroll.

Key to the advancing of the already complicated “Dig” plot is something referred to as the “war tablet.” Supposedly written by the Essenes, the tablet is supposed to be stored at Jerusalem’s Israeli Museum and is said to contain a code that will reveal the hiding places of 12 precious stones.

Quite a lot of this is actually based in fact. First, the Essenes were an ancient sect of apocalyptic Jews responsible for the Dead Sea Scrolls, 2,000-year-old manuscripts of, among other things, the Old Testament. And there really is a “war scroll” among their writings. Perhaps the producers of “Dig” went with a tablet instead of a scroll because it is less fragile?

Yet even the show’s switch from papyrus scroll to copper tablet has some basis in fact. The Essenes did produce something called “The Copper Scroll,” which — like the one in the series — describes buried treasure. But unlike the well-preserved prop in the show, which kind of looks like a Hershey bar with a bite taken out of it, the real one is flaky and fragile and in pieces.

“The whole thing is pretty much fiction,” said John J. Collins, author of “The Dead Sea Scrolls: A Biography” and a professor at Yale Divinity School. “The Essenes did have a war ‘something.’ But it has nothing whatever to do with finding anything. What did you say the name of this program is?”

And while there really is an Israel Museum in Jerusalem and it really does have fragments of the Dead Sea Scrolls, only its janitor and the makers of “Dig ” know if its air-conditioning ducts are so clean a man could crawl through them and come out looking as good as Jason Isaacs, the star of “Dig.”

“Dig” injected the existence of the ancient Essenes into the storyline a few episodes ago but is now fleshing out their portrait. They really did think of themselves as “the sons of light” engaged in a battle with the “sons of the dark” — exactly the subject of the war scroll/tablet. They really did go and live in Qumran, a series of caves on the shores of the Dead Sea. They really did write the Dead Sea Scrolls, which were found in 1947.

But did they dance naked at night by the light of a bonfire, praying to God in a language that might be Greek or Hebrew?

Who knows? But what is based in truth here about the character known only at this point as “The Essene” is that the white attire he is always seen in is a symbol of purity in both Judaism and Christianity. Combine that with the color of “Red,” the genetically engineered heifer the Essene is seeking, and you have the white purity of God washing clean the bloody red sins of mankind.

Decoding the “war tablet” leads both the good guys and bad guys of “Dig” to a place called Megiddo, otherwise known by its Greek name, Armageddon. High jinks — in terms of a car-and-motorcycle chase — ensue.

Most people with a grounding in the New Testament think of Armageddon as a battle, not a place, predicted in the Book of Revelation, the final book of the Bible. But Armageddon is actually the place — a desert plain in northern Israel  — where the final battle between the forces of good (Jesus, yea!) and the bad (the Antichrist, boo!) are supposed to take place.

In actuality, Megiddo was once a great city-state and the site of several major battles. Today, it is a World Heritage Site with many mosaics that can be viewed, like the one show in “Dig.” But don’t do to it what “Dig” bad guy Yussef Khalid (Omar Metwally) does unless you have plenty of time to spend in an Israeli jail.

There really is something called “gematria” in which Hebrew letters are given numerical values that are worked and manipulated to crack codes or explain things.

And the show’s creators continue to have fun with biblical numerology.  The compound of the show’s secret Christian sect is on “route seven” with a turnoff at “mile marker 19.” Seven is the number of the divine, a perfect number, and 19 — with a one representing God and a nine representing his judgment — continues to bode not well for those who live at the compound.

As Jason Isaacs says in the show to Ori Pfeffer, “We are missing something.” 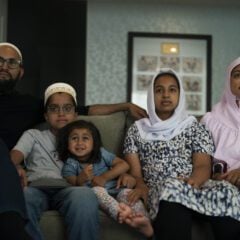