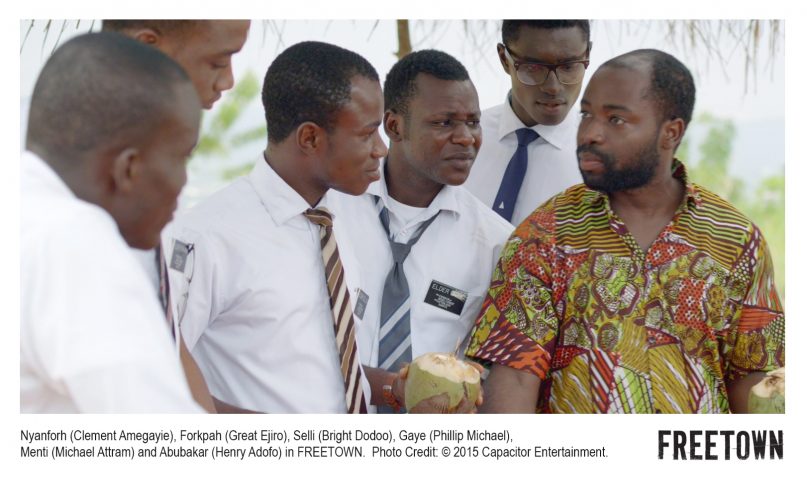 Next Wednesday, April 8, more than 100 U.S. theaters will begin screening , which tells the true story of a courageous group of LDS missionaries caught in the crossfire during Liberia’s civil war.

In 1990, eight elders and their driver squeezed into a small sedan for a harrowing journey from Monrovia to Freetown, Sierra Leone, where they hoped to serve out their missions in safety.

I had the privilege of screening an early version of the movie and found it inspiring without being treacly. It manages to be generate considerable suspense even though the audience knows that all the missionaries are going to survive. So I was delighted to talk to Garrett Batty, the co-writer, director, and co-producer of Freetown, about the story behind the movie. — JKR

RNS: How did you find out about the missionaries’ story?

Batty: I read a short article posted on lds.org that mentioned these missionaries in Liberia and the faith that they had. I was intrigued because the article referred to letters these missionaries had written, and I wanted to research those letters. In reading those, I knew that we had a very compelling story for a film there. The universal question they faced was whether they would choose faith or fear in a high-stakes situation. I don’t think we all have these high-stakes scenarios, but to be put into a situation where a choice has to be made of faith conquering fear, that’s a common dilemma.

RNS: How did the project go from idea to film?

Batty: I researched the story and took a great deal of effort to track down the original missionaries, those that I could find, and talk to them about doing a film on this. Then I brought in Melissa Larson as a screenwriter. Because of my past movie The Saratov Approach, I was able to raise money from private investors who believed in this story and wanted it to be seen.

RNS: Do any of the original missionaries appear in cameos in the movie?

Batty: No. We filmed in Ghana, and the original missionaries are spread all over the world. It was not possible to have them in the film. However, one of the most pivotal missionaries, Marcus Menti, is attending public screenings. His reaction is incredibly positive. Certainly when audiences have an opportunity to see the film and then ask questions of Marcus, he talks about how it captured the authenticity of the emotions they were going through.

RNS: Was this a story many viewers were familiar with?

Batty: We’re fortunate that it is a new story for many of us. But after I’d first read this story, the Church actually published an Ensign article about it, back in June. Most of our audiences have been outside of a full Mormon audience. We played the film at the Pan-African Film Festival in LA, and it did well there. It appealed to a festival-going audience. We also premiered it in Ghana, and it was received very well.

RNS: What details were changed in the movie?

Batty: There were actually eight original missionaries and their driver, but for the logistics of the film, we had it be six. This enabled us to get a camera and myself, the director, into the car when we were filming. Also, there were over 50 rebel checkpoints the real missionaries had to pass through. We had to condense that. RNS: Did you cast Mormon actors in the film?

Batty: We cast based on talent, and had a great turnout of over 125 professional actors at auditions. The coincidence is that one actor from each missionary companionship happens to be LDS, but that was not known to us at the time of casting. It did add a layer of credibility to their performance. The experience became bigger than just the film, from a faith standpoint.

RNS: What are your favorite scenes?

Batty: I like those cinematic moments of extremely high tension. My favorite theme from the movie is “keep moving forward.” Even in making the film, the logistics in Ghana were often very difficult. There were so many challenges in filming that we certainly felt at times like the only way to get through was by some sort of miracle, just like in the story.

RNS: What do you want the main takeaway to be for viewers?

Batty: First of all, I want them to be entertained. That’s the reason we go to a movie, to enjoy this cinematic experience of going to a place or situation we haven’t been in ourselves. If they want to also draw more from the film, I hope there is the message that faith helps us endure whatever challenges might come up in our lives. But I don’t ever want a desire for a message to get in the way of my role as a filmmaker, which is to entertain.

RNS: What’s next for you?

Batty: Right now we’re focused primarily on April 8, and getting people to go to the theater that opening weekend. In an independent film world, if the movie doesn’t perform, there can’t be a next project. We can either complain about that, or we can encourage everyone we can to see the movie on its opening weekend.