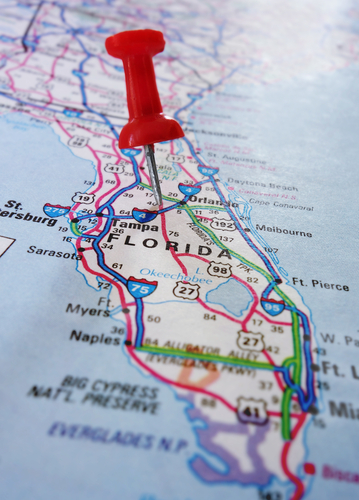 Close-up of a Florida map.

(Reuters) - The Florida legislature is moving to legalize unwed cohabitation, repealing an 1868 law that makes "lewd and lascivious behavior" among consenting adults a misdemeanor punishable by 60 days in jail and a $500 fine.

"Currently, over a half-million couples in Florida are breaking this law. The government should not intrude into the private lives of consenting adults."

They are not getting caught much, Sobel said, but some grandparents are being denied visitation rights because they live with an unmarried partner, and that cohabitation status could show up in background checks as a law violation.

"Only three states are left with this outdated statute — Florida, Michigan and Mississippi," she said.

The committee voted unanimously for her repeal bill, which earlier cleared the Criminal Justice Committee. It is set for Senate floor debate in the second half of the session in May.

A companion measure in the House has also cleared two committees and is pending in the House Judiciary Committee.

Related Posts
By Yonat Shimron
‘More than individual sin’ — Black pastors urge evangelicals to admit systemic racism
By Thomas Reese
Is Trump killing his supporters?
By Jack Jenkins
Florida pastor arrested for refusing to halt worship amid outbreak
By Jeffrey Salkin
Why Jews like Mike
By Jeffrey Salkin
To the Jews who applauded Trump