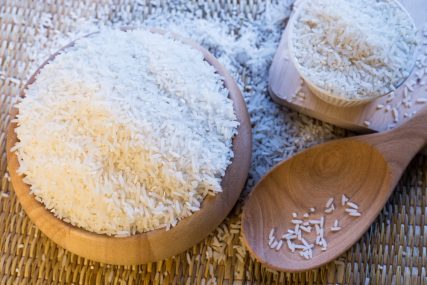 It’s time to join the revolution — the Kitniyot Liberation Front.

What are kitniyot? They are legumes, and for centuries, Ashkenazic Jews (whose ancestors came from central and Eastern Europe) have refrained from indulging in them during Passover — along with leavened products, like  bread, donuts, bagels, pasta, pizza, etc.

In other words — anything that’s fun to eat.

Sephardim (Jews of Spanish, north African and Middle Eastern ancestry) have no such “legume-phobia,” and they eat foods like rice during the festival of freedom.

But lately, there has been a new cry for freedom that has resounded throughout the Jewish world. Increasingly, Jews are saying that, when it comes to Passover, “rice is nice.”

For years, I have struggled with this dietary matter. At the beginning of the holiday, I am disciplined in my rejection of all things leavened and legumy. This testifies to the power of my eastern European ancestors.

By the fourth day of Passover, I get a little antsy.

I call my father and I ask him to review our family tree with me. “Where, exactly, is our family from?”

“Vilna,” he says. “What the Lithuanians call Vilnius. The capital of Lithuania. The Jerusalem of Europe!” he waxes poetic.

By the sixth day of Passover, I remember that my late mother once said that her ancestors came Munkascz, in Hungary. I take it upon myself to say that she must have got it wrong.

My maternal grandfather, I am sure, was from Aleppo, Syria.

(Hey, if you can convert to Judaism, why can’t you do an “intra-Jewish” conversion and go from Ashkenazic to Sephardic?)

Bring on the rice.

Now, why are there so many Jews who are now willing to dump the kitniyot restriction? Here is my theory. Among the ultra-Orthodox, there is a tendency to indulge in chumrot — stringencies in Jewish practice — and for pious Jews to actually compete with each other to increase those stringencies. I sense that, among the modern Orthodox and more liberal Jews, there has been a gradual loss of patience in this way of doing Judaism, especially with its political manifestations in the state of Israel. Basically, the non-ultra Orthodox are saying: “We want our Judaism back!”

And the opening shot in that revolution is the one that says: “Why are we relying on stringencies that go back to the Middle Ages and which have a very shaky foundation?”

And so, for those Jews who are ready to embrace kitniyot, and to eat rice, soy, and other assorted legumes during Passover, let me strengthen your resolve to do so.

Now, these reasons will not work for every Jew — and frankly, they shouldn’t.

First, the whole “it’s not in the Bible, so I’m not going to do it” argument. Let’s face it; contemporary Judaism is not a biblical religion. Hanukkah isn’t in the Bible. Neither is lighting Shabbat candles. Neither, by the way, is the Passover Seder. Judaism grows and changes.

Second, not every custom makes sense. Sometimes, customs exist not because we subject them to the scrutiny of history, but because they touch something deep and powerful within our souls. Consider American customs. We know, deep down, that the practice of fireworks on the Fourth of July is reminiscent of “the rockets’ red glare” during the formative years of our nation’s independence. We might even intellectually reject the bellicosity that is embodied in that memory. But we do it — nevertheless. It’s who we are, as Americans.

For many Jews, not eating rice, corn products, etc. defines who they are as Jews. In a time when Jews are all too flippant about abandoning their rituals, we should not be in the business of militantly trying to remove Jews from their past.

But, but, but: if you want to have a “rice Pesach”, and be liberated from the Pharaoh of all-too-strict-and-historically-flimsy customs, feel free to do so.

After all,  none other than Maimonides said that abstaining from legumes was a “stupid custom.”