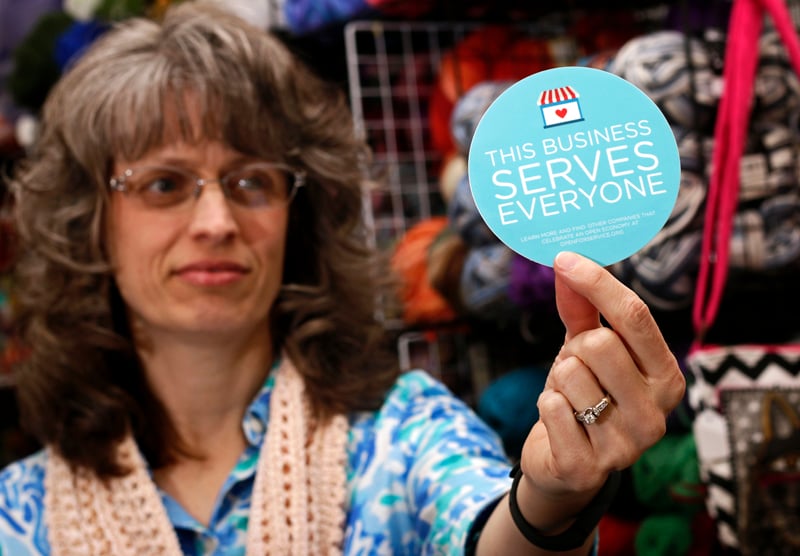 Elizabeth Ladd, owner of River Knits Fine Yarns, holds a “This business serves everyone” sticker she plans to place outside her shop in downtown Lafayette, Ind., on March 31, 2015. Photo courtesy of REUTERS/Nate Chute
*Editors: This photo may only be used with RNS-POLLS-INDIANA, originally transmitted on April 2, 2015.

(RNS) A host of governors, CEOs and church leaders call Indiana’s new religious freedom law a backdoor opening to anti-gay discrimination, but Americans appear more divided on whether a wedding-related business should have the right to turn away a gay customer.

The law, which critics say would allow owners of small businesses to invoke their faith to refuse service to LGBT customers, applies most apparently to wedding vendors — bakers, photographers and florists, for example — who cite their faith in opposing same-sex marriage.

Where is the American public on this debate? It depends on how the question is asked.

A February Associated Press poll found that 57 percent of Americans believe a wedding-related business should have the right to refuse service to a gay couple on religious grounds, as opposed to nearly 4 in 10 Americans (39 percent) who said that religious exemption — which Indiana’s new law explicitly allows — is wrong.

In addition, 50 percent said that local magistrates shouldn’t have to issue marriage licenses to same-sex couples if it contradicts their religious beliefs.

Days after Republican Indiana Gov. Mike Pence signed the Religious Freedom Restoration Act on March 26, Arkansas lawmakers passed a similar law, despite the national outrage provoked by Indiana’s. The Indianapolis-based Christian Church (Disciples of Christ) have vowed to move its 2017 General Assembly out of state, and the governors of Connecticut, New York and Washington have barred state employees from traveling on official business to Indiana.

On Thursday (April 2), Indiana lawmakers unveiled a new bill to clarify that the religious freedom law cannot be used to deny services to anyone, but the language has angered supporters of the religious freedom law, who call the new bill a retreat, and some business leaders who say the new measure doesn’t go far enough. Meanwhile, Arkansas Gov. Asa Hutchinson, also a Republican, has asked for changes before he signs his state’s bill.

A survey on wedding services and gay couples, released last September by the Pew Research Center, found that 47 percent of respondents thought it should be legal for businesses to turn away gay brides and grooms on religious grounds, compared with 49 percent who said they should be required to accept them as customers.

But Americans register far different attitudes about service to gay customers when the question does not mention a wedding. Then, there is little sympathy for those who would invoke religion to turn away gay customers. A 2014 Public Religion Research Institute survey found a mere 16 percent of Americans supporting small-business owners who would turn away a gay customer for religious reasons, and 8 in 10 said it should be legal.

Asking specifically about turning away gay couples headed to the altar does seem to make a difference to Americans, who in general come out strongly against anti-gay corporate discrimination, said Dan Cox, PRRI’s director of research.

Americans don’t like the government telling people what to do when it comes to religion, Cox said, but they also strongly reject discrimination against gays in the marketplace.

“But when these two values conflict,” he said, “and the question is so narrowly constructed, they may answer it narrowly, and reason that allowing a small subset of businesses to turn away gay customers would not have such sweeping discriminatory effects.”

News
Amid Black exodus, young Catholics are pushing the church to address racism
Follow us on Facebook!
Submit your photos to RNS