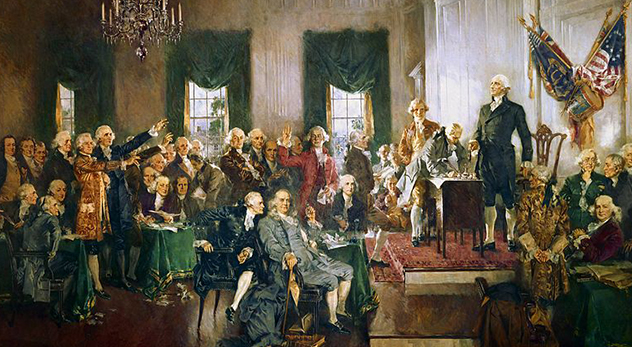 A Princeton historian says the idea that America is a "Christian nation" is a modern invention fueled by corporations, clergy, and politicians. - (Image: "Scene at the Signing of the Constitution of the United States" by Howard Christy; Courtesy of Wikimedia Commons - http://bit.ly/1I8pq63)
April 3, 2015
Jonathan Merritt

A Princeton historian says the idea that America is a "Christian nation" is a modern invention fueled by corporations, clergy, and politicians. - (Image: "Scene at the Signing of the Constitution of the United States" by Howard Christy; Courtesy of Wikimedia Commons - http://bit.ly/1I8pq63)

Recent surveys have indicated that many, if not most, Americans believe the founding fathers wanted this nation to be officially Christian. But a new book by Princeton historian Kevin Kruse slices and dices this notion with razor-sharp facts and anecdotes. In "One Nation Under God: How Corporate America Invented Christian America," he shows how corporations such as General Motors and Hilton Hotels partnered with clergymen and politicians to conflate patriotism and pietism. Here he tells how our nation's Ten Commandments monuments were originally movie marketing props and how evangelist Billy Graham participated in America's shifting mindset.

KK: By “Christian America,” I don’t mean the idea that this is a country in which Christians and Christianity have played a fundamentally important role. I’m talking about the belief that the state itself, politically speaking, is officially and formally a “Christian nation.” Most of the markers that Americans invoke when they argue that we are one – the words “under God” in the pledge, the national motto of “In God We Trust,” the National Prayer Breakfast, the National Day of Prayer, etc. – are creations of the modern era and, more specifically, creations of corporate America.

KK: Starting in the 1930s, major corporations and business lobbies marketed a new language of “freedom under God” to discredit what they denounced as the “slavery of the welfare state.” As their campaign swept the nation in the 1940s and 1950s, many Americans came to think of their country as officially “one nation under God.”

RNS: You said "America as a Christian nation" is a modern invention, but others counter that it traces back to our founding fathers. What say you?

KK: The founding fathers were religiously diverse, but on this issue they were nearly unanimous in insisting that the United States of America was not a Christian nation. The Declaration invokes the Creator, of course, but the Constitution – the basis of our government – pointedly does not. Other than dating the document “in the year of our Lord,” the only mentions of religion in the Constitution and Bill of Rights are ones that keep the state at arm’s length from the church. Even more directly, the 1797 Treaty of Tripoli – begun by Washington, signed by Adams, and passed unanimously by a Senate half-filled with signers of the Constitution – states quite clearly that “the Government of the United States of America is not, in any sense, founded on the Christian religion.”

RNS: You say that some of this notion was a response to Roosevelt's New Deal. How so?

KK: Roosevelt himself deserves some of the credit, as he regularly invoked religion in his speeches for the New Deal. His first inaugural address was so laden with Scripture that the National Bible Press put out a chart linking his text to the “Corresponding Biblical Quotations.” The business interests he denounced as “the moneychangers” decided to beat him at his own game, using religious rhetoric to repackage their worldly agenda in heavenly terms. As both sides of the debate blended religion and politics, ideas of piety and patriotism became closely intertwined for all.

RNS: How did Billy Graham partner with American corporates to propel this idea forward?

KK: Graham’s emergence on the national stage owed a great deal to corporate patrons. Sid Richardson, an oilman who was perhaps the richest man in America, connected him to powerful politicians in D.C. Publishers like Henry Luce and William Randolph Hearst promoted him in the press. In these early years especially, Graham was such a fervent defender of corporate America that a London columnist dismissed him as the “Big Business Evangelist.” An outspoken opponent of the “creeping socialism” of the regulatory state, Graham championed corporate interests and promoted stories of godly businessmen who had “God as a working partner.” At the same time, he denounced labor unions as inherently godless and described the Garden of Eden as a paradise with “no union dues, no labor leaders, no snakes, no disease.”

RNS: How is "One Nation Under God" a corporate construction and not just a political one?

KK: The phrase itself isn’t a corporate construction, but rather a popular appropriation of Abraham Lincoln’s prayer in the Gettysburg Address “that this nation, under God, shall have a new birth of freedom.” The phrase was largely forgotten until the early 1950s. As the corporate campaign for what the Senate chaplain called “under-God consciousness” swept the country, private groups looked for ways to advance the cause. The Knights of Columbus proposed adding “under God” to the previously secular Pledge of Allegiance in 1951; three years later their campaign had won over Congress.

RNS: What about "In God We Trust"?

KK: The phrase originated in an often-forgotten stanza of the “Star Spangled Banner” and, once again, entered our political culture in the Civil War. A few ministers claimed that the war had come because of “our national shame in disowning God” – that is, the founders’ mistake in not making America an officially Christian nation from the start – and urged the government to correct the oversight. Treasury Secretary Salmon Chase liked the idea, and had “In God We Trust” added to coins. (Teddy Roosevelt believed it was blasphemous and tried to remove it, but failed.) After the corporate campaign of “under-God consciousness” swept the country in the 1950s, Congress added it to a stamp in 1954, to paper money in 1955, and made it our first official national motto in 1956.

RNS: The 10 Commandments have been a point of contention among some Americans. Where did these battles originate?

KK: Legendary filmmaker Cecil B. DeMille was an outspoken ally of the corporate-backed Christian libertarian groups that promoted “freedom under God.” His blockbuster film The Ten Commandments, he noted repeatedly, focused on their central question: “Are men property of the state? Or are they free souls under God?” Starting in 1955, DeMille worked with the Fraternal Order of Eagles to construct granite monuments of the Ten Commandments, all in an effort to promote the forthcoming film. Together, they put up more than 4,000 monuments across the country – at city halls, courthouses, even on the US-Canada border – and had stars like Charlton Heston and Yul Brynner help dedicate them. Others soon followed suit on their own initiative. But, at its root, one of the key sources of conflict in church-state relations today originated in a marketing campaign for a 1950s movie.

RNS: Why is religion in the public square so divisive today, in your opinion? Who is at fault?

KK: President Eisenhower succeeded in etching the language of “one nation under God” into our national consciousness because he uncoupled it from its partisan political roots in Christian libertarianism and made it a broad enough for virtually all Americans to embrace. President Nixon, who had served as Ike’s vice president, tried to promote the same language during his time in office, but he did so to support polarizing issues like the Vietnam War and domestic programs of the Silent Majority. As conservatives coopted this language, liberals shied away. In the end, the combination of piety and patriotism that had once brought Americans together only drove them further apart.

RNS: How can we achieve harmony on these debates?

KK: As an historian, my professional training is in hindsight. But I do think there are lessons in this story for all sides. Those who are opposed to this sort of religious rhetoric need to remember that there once was a period when almost all Americans believed this country was “one nation under God.” True, it was much more recent than many assert, but it existed all the same; it’s not a “myth” manufactured by the religious right. Those who support this political religious language, meanwhile, need to remember that much of the opposition to it in the 1960s and 1970s came not from atheists, but from prominent religious leaders opposed to school prayer amendments. They resented the state’s intrusion into religion and dismissed this public religion as a “one-size-fits-all” faith that lost any real meaning. Perhaps if both sides of the debate take a closer look at this story’s past, they can find a way to write the next chapter together.