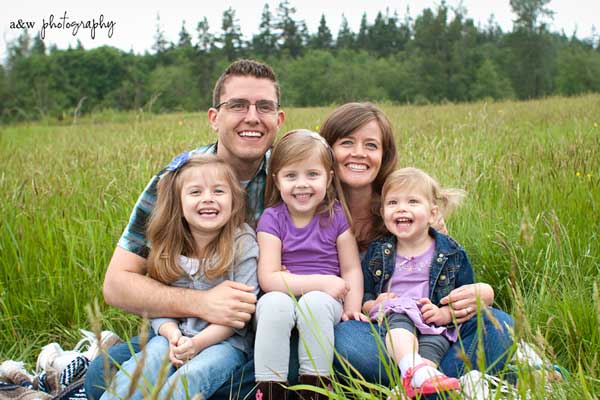 Josh Weed, a marriage and family therapist in the Northwest, has known he was gay since his teens, and Lolly was the first person he told. They’ve been married 10 years and have three daughters. RNS file photo courtesy Josh Weed.

SALT LAKE CITY — A Mormon man and woman in a mixed-orientation marriage are objecting to their inclusion in a U.S. Supreme Court case filing because it argues that legalized gay marriage would demean marriages like theirs.

Josh and Lolly Weed’s names and statements are referenced in a “friend of the court” brief ahead of the April 28 arguments in a consolidated 6th Circuit Court of Appeals case, which many expect will legalize gay marriage nationwide.

The brief was filed April 3 on behalf of couples in mixed-orientation marriages — unions in which one partner is gay and the other is not — who oppose marriage equality.

The Weeds told The Salt Lake Tribune on Tuesday (April 14) they didn’t consent to be included in the filing, nor do they share its view.

“What does that have to do with us at all?” asked Josh Weed, an openly gay man who has been married to a woman for 12 years. “I feel no devaluation of my marriage status by having marriage equality.”

“My wife and I support marriage equality,” Josh Weed said. “That is sacrosanct to us and important to us because we know many wonderful people who are hurt by the current state of affairs. To have this amicus brief out with our names associated with it is very hurtful.”

Doug Mainwaring, of Massachusetts, drove what he called the “grass-roots” effort to gather supporters to sign on to the brief.

“There’s been a message delivered loud and clear that if you are same-sex attracted, there’s only one thing you can do, which is make the declaration that you are gay and make that the foundation of your identity,” said Mainwaring, who will soon mark the 30th year of his own mixed-orientation marriage. “There are a lot of us that know that’s not true.”

An activist who helped found the National Capital Tea Party Patriots, Mainwaring said he felt so strongly about the importance of marriage between men and women that he reached out to individuals he knew through the LDS Voice(s) of Hope online video project in hopes of taking their shared message to the Supreme Court. It’s there, he said, that he found the individuals who signed on to the brief.

Statements from the Weeds and a handful of other couples and individuals were gathered from Internet posts or other sources that were in the public domain and can be used under the legal doctrine of “fair use” when properly attributed.

The Weeds, who are expecting their fourth child in May, said they wish they had been asked whether they wanted to be included in Mainwaring’s effort, and they believe they’ve been misrepresented.

“I wish there had not been assumptions made about my position,” Josh said. “I wish I’d had the opportunity to say ‘Please don’t’ and ‘I disagree.’”