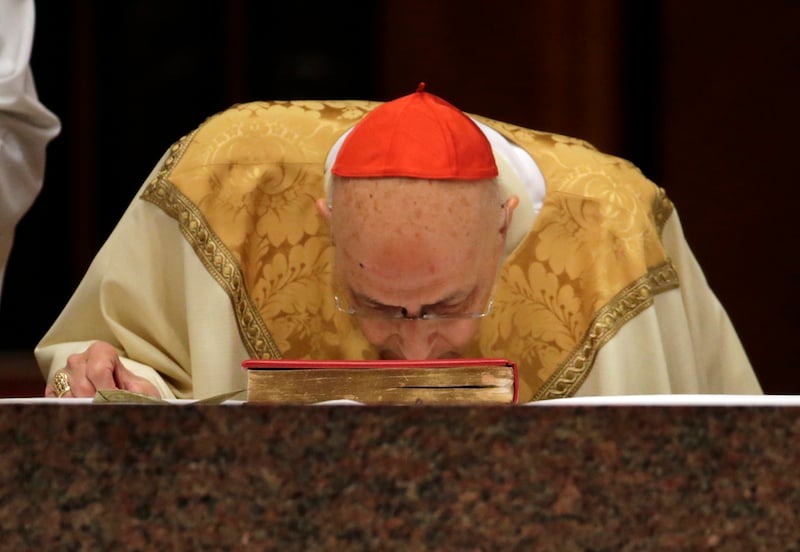 Cardinal Francis George kisses a Bible during the installation Mass of his successor, Archbishop Blase Cupich, at Holy Name Cathedral in Chicago on Nov. 18, 2014. Photo courtesy of Reuters/Charles Rex Arbogast.
*Editors: This photo can only be used with RNS-GEORGE-OBIT, transmitted April 17, 2015.

(RNS) The death of Cardinal Francis George at age 78 on Friday (April 17) was not unexpected. The powerful archbishop of Chicago had been battling cancer for years, and when it returned, the toll contributed to his decision to give up the reins of one of the nation's premiere dioceses -- the first man to retire rather than die in that office.

What is much less certain, however, is the fate of George’s legacy as the intellectual lodestar for conservative U.S. Catholics, and how, or whether, that patrimony will endure in the era of Pope Francis.

George was a Chicago native, born Jan. 16, 1937 in the city's Portage Park neighborhood, an altar boy who thought of becoming a priest from the time of his First Communion at age 7.

In many ways, George ran counter to Chicago's reputation as an incubator of church innovation, a sprawling, diverse diocese of outspoken lay people and doughty clergy who were unafraid to speak their minds and to champion the demands of their flock.

For all his personal warmth and (often pointed) good humor, George was always seen as a prelate who stressed the rules over the exceptions, who sought to represent Rome’s interests on the local scene, rather than the other way around.

Those characteristics seemed to come to the fore almost from the moment St. John Paul II named him to Chicago in 1997. George was seen as an antidote to the late and beloved Cardinal Joseph Bernardin, who advocated a common ground Catholicism that set conservative teeth on edge. Bernardin, too, died after a public battle with cancer.

George instead represented everything Bernardin was not, a churchman who would fight Catholicism’s “supine accommodation to the intellectual and cultural fashions of the day,” as the conservative writer George Weigel put it in a tribute to George in First Things magazine last year.

American Cardinal Francis George, archbishop of Chicago, attends a news conference at the North American College in Rome on March 4, 2013. Photo courtesy of Reuters/Alessandro Bianchi *Editors: This photo may only be republished with RNS-GEORGE-OBIT, originally transmitted on April 17, 2015.

In pressing that approach, however, George often came off as something of a cerebral stickler, with disaffected Catholics quickly dubbing him “Francis the Corrector.”

Indeed, he in many ways served as a point man for John Paul, who was by then ailing, and for John Paul’s doctrinal watchdog and theological adviser, Cardinal Joseph Ratzinger, who would be elected Benedict XVI in 2005.

Little wonder that in his analysis of George’s legacy, longtime Vatican expert John Allen called him the “American Ratzinger.”

“George’s clear and strongly stated positions on issues such as abortion, contraception, and the Catholic liturgy could be either celebrated or reviled -- and he drew both reactions, repeatedly -- but they could never be ignored,” Allen wrote.

In many respects, George’s influence reached its zenith under Benedict. Any cardinal will have sway among American bishops, especially the archbishop of Chicago. But George made a name for himself not only as one of the hierarchy’s sharpest minds and most outspoken advocates for orthodoxy, but as someone who could get things done.

After the clergy sex abuse scandal broke in 2002, George helped push through an unprecedented set of policies, including a “zero tolerance” rule for abusive priests. Yet he himself got snagged by those policies as abuse scandals by some of his own clergy later erupted on his watch.

George also helped push through controversial changes to the language of the Mass, and he served as head of the U.S. Conference of Catholic Bishops from 2007-2010.

During the latter stages of his term, and in the years after that, he became a force behind the hierarchy’s increasingly toxic battles with the Obama administration over issues like health care reform, contraception, gay rights and religious liberty.

It was the kind of struggle that seemed to energize the cardinal, even as it brought out some of the darker shades of his outlook and underscored his reputation as a culture warrior.

“I expect to die in bed, my successor will die in prison and his successor will die a martyr in the public square,” as George once told a group of priests in a speech on what he saw as the likely fate of religious freedom in the modern, secular world.

What was often omitted from that rather stark assessment was George’s follow-up line, which expressed the confidence that the successor of that bishop-martyr “will pick up the shards of a ruined society and slowly help rebuild civilization, as the church has done so often in human history.”

The foundation of that hope was George’s belief that a Catholic Church inspired by the turn to tradition represented by John Paul and Benedict -- and to no small degree himself -- would endure.

The only thing preventing such a restoration was an internal threat, namely “liberal Catholicism,” which in a famous 1998 speech he called “an exhausted project” that “has shown itself unable to pass on the faith in its integrity and (is) inadequate, therefore, in fostering the joyful self-surrender called for in Christian marriage, in consecrated life, in ordained priesthood.”

“It no longer gives life,” he said of the church's left wing.

Then, two years ago, came Benedict's stunning resignation, and the equally stunning emergence of Francis, an Argentine Jesuit who from the moment of his election set out to shake up the Catholic Church and upend so many of the traditions and priorities that George held dear.

As George was entering the final stages of his battle with cancer last September, Francis named Bishop Blase Cupich of Spokane, Wash., a hero to moderate and progressive Catholics, to succeed him.

Francis and his Bernardin-style approach seemed to leave the Chicago cardinal nonplused.

“He sends out so many signals it gets a bit jumbled at times,” George told the Chicago Tribune last October, speaking of his new boss. “I'm sure he's not confused, himself. It's confusing for a lot of people, including myself at times. For someone who appreciates clarity, I would like to get a few things clear so I can cooperate.”

At that time, George was still hoping to travel to Rome to see Francis and try to clarify “who’s truly shaping his thinking,” as he told Allen in November.

“I certainly respect (Francis) as pope, but I don’t yet really have an understanding of, ‘What are we doing here?’ ” George said.

That visit to the Vatican never happened, and the answer to his question may not be clear for some time, for anyone -- and the same may be said of the fate of George’s brand of Catholicism.

But first and last, George was a man of deep faith. In one of his final interviews, with America magazine's Sister Mary Ann Walsh, who is also battling cancer -- he began by reflecting on this new stage of life as a suddenly retired archbishop facing a terminal illness.

“I have a sense that I’m being taught to let go," he said, "to put aside many of the concerns that have shaped my life, even as a bishop."

As for his legacy?

He himself put it best in the refrain that he repeated several times in his final homily at his last Mass as archbishop in a packed cathedral in downtown Chicago: