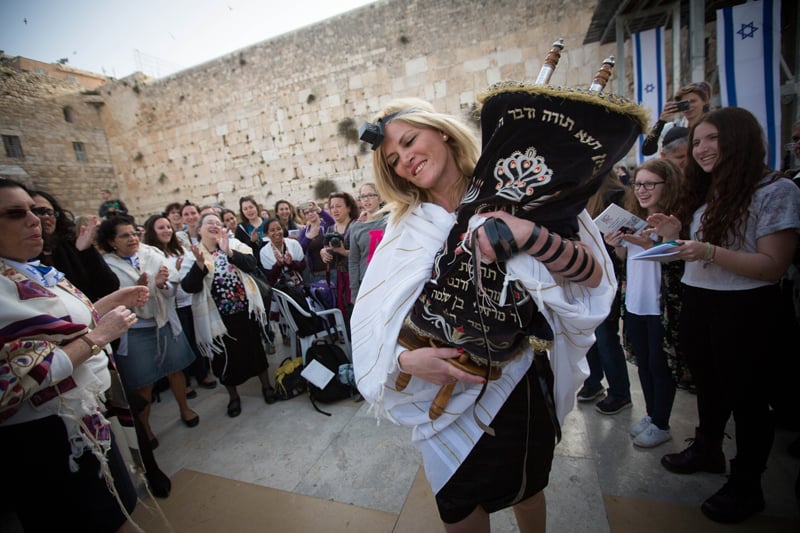 Women of the Wall, who retrieved a Torah scroll from the men’s prayer section despite regulations against women reading from a Torah at the Wall, celebrate during their monthly prayer service at the Wall. Photo courtesy of Miriam Alster/Flash 90

JERUSALEM (RNS) For the first time in its 26-year history, the feminist prayer group Women of the Wall managed to read from a full-sized Torah scroll Monday (April 20) after one of its members surreptitiously borrowed one from the Western Wall’s men’s section.

The scroll’s procurement, which was facilitated by the group’s male supporters standing on the other side of a partition, was a bold move by a group that has continuously challenged the ultra-Orthodox establishment’s sole authority over the holy site.

Rabbi Shmuel Rabinowitz, rabbi of the Western Wall, has long prohibited women from wearing prayer shawls and reading from a Torah. He based his prohibition on a regulation that forbids any religious ceremony “not in accordance with the custom of the holy site and which offends the sensitivities of the worshippers at the place.”

Although a 2013 court ruling confirmed Women of the Wall’s right to pray at the Wall, Rabinowitz has continued to ban anyone from bringing a Torah into either the men’s or women’s section and has placed all 100 of the holy site’s Torahs in the men’s section alone.

Although the group recently smuggled a tiny Torah into the women’s section, “you needed a magnifying glass to read it and we had to return it to its owners in London,” said Anat Hoffman, WOW’s chairwoman.

But on Monday morning, the group’s male supporters held a Torah reading service at the Wall, next to the gender partition. Once their service finished, the men opened an unlocked gate leading to the women’s section and a female WOW activist stepped into the men’s section and picked up the Torah. 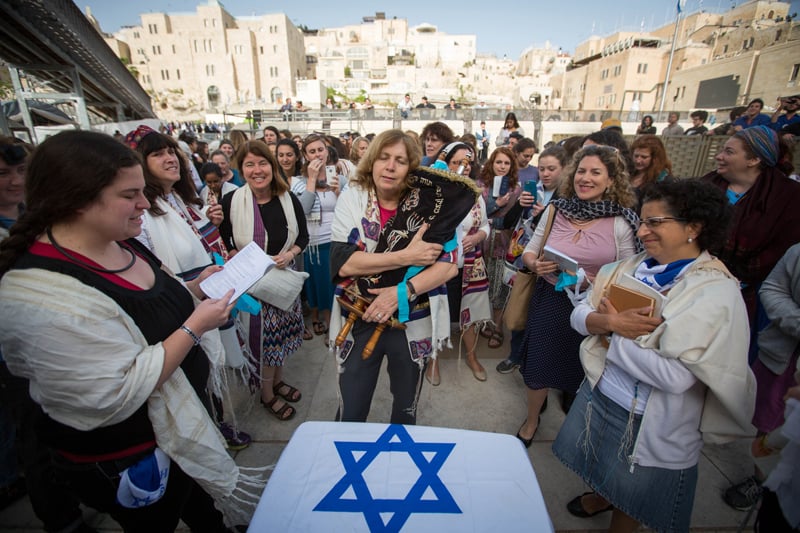 Women of the Wall, who retrieved a Torah scroll from the men’s prayer section despite regulations against women reading from a Torah at the Wall, celebrate during their monthly prayer service at the Wall. Photo courtesy of Miriam Alster/Flash 90

Hoffman said that more than 100 women “sang and prayed and cried” in celebration when the Torah entered the women’s section. Ten minutes later, when the group readied the Torah for prayer, a group of men burst in and demanded that the women hand over the Torah.

Hoffman said the men “were employed by Rabinowitz.” The rabbi could not be reached for comment.

Charlie Kalech, the supporter who handed the Torah to the WOW member, said one of the unarmed guards, “much larger than me, threw me to the ground. I hit the back of my head on the stone ground.” Kalech, who was treated at a hospital emergency room for a head injury along with another male supporter attacked by an ultra-Orthodox worshipper, was arrested for “disturbing the public order.” He filed a complaint against his attacker.

“We have the right to move a Torah from one side of the prayer plaza to the other side, and there are no regulations or legal reasons to stop it,” she said. “We didn’t break any law.”