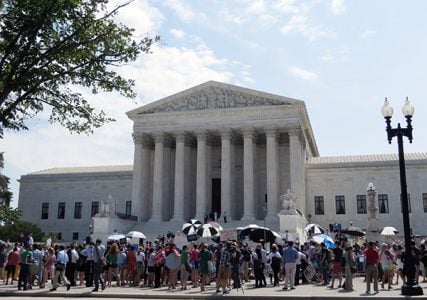 Citizens rallied on the steps of the Supreme Court on Monday (June 30), after it sided with the evangelical owners of Hobby Lobby Stores Inc., ruling 5-4 that the arts-and-crafts chain does not have to offer insurance for types of birth control that conflict with company owners’ religious beliefs.

(RNS) As the U.S. Supreme Court prepares to hear arguments on Tuesday (April 28) that could wind up legalizing gay marriage nationwide, dozens of Christian leaders have issued a call to civil authorities to preserve “the unique meaning of marriage in the law” — but also to “protect the rights of those with differing views of marriage.”

The open letter “to all in positions of public service,” released Thursday (April 23), seems to reflect a growing recognition by same-sex marriage foes that they may be on the losing side of the legal battle to bar gay marriage and need to broaden their focus to securing protections for believers.

Gay marriage opponents are also losing the battle for the hearts and minds of their own flocks: Polls show that American believers, like the rest of the public, are growing much more accepting of same-sex relationships, or at least much less inclined to invest time or resources into waging the fight against legalizing gay marriage.

This week’s statement, “The Defense of Marriage and the Right of Religious Freedom: Reaffirming a Shared Witness,” was signed by 35 religious leaders representing Catholic, evangelical, Pentecostal, Orthodox and Mormon churches. The only non-Christian signatory was Imam Faizul Khan of the Islamic Society of Washington Area.

The leaders forcefully reiterate their shared belief that marriage is “the union of one man and one woman” and argue that apart from religious doctrines, the state “has a compelling interest in maintaining marriage” for the good of society and the “well-being of children.”

But they add that “this commitment is inseparable from affirming the equal dignity of all people and the necessity of protecting their basic rights” if, for example, the high court rules that all states must recognize gay marriage.

“No person or community, including religious organizations and individuals of faith, should be forced to accept this redefinition,” they write. “Government should protect the rights of those with differing views of marriage to express their beliefs and convictions without fear of intimidation, marginalization or unwarranted charges that their values imply hostility, animosity, or hatred of others.”

Arguments over how or whether believers must accommodate gay people have become a flashpoint in the culture wars and a source of political and legislative debates.

That was vividly demonstrated earlier this month when owners of an Indiana pizzeria who announced they would not cater a gay wedding because of their Christian belief became the focus of threats, and a rallying point for opponents of gay rights.

Increasingly, some have been pointing toward a new law in Utah as an example of where religious freedom champions should put their energies. That law, passed in March in a deeply conservative state with the support of Mormon leaders, grants statewide protections against housing and employment discrimination for gay and lesbians as long as those measures safeguard religious freedom.