The Church of Jesus Christ of Latter Day Saints (LDS) remains enigmatic to most Americans. Even less is known about Mormon politics.

To be fair, not many who watch religion and politics closely know a lot of about Mormons in politics.

But hopefully that will change. Political scientists David Campbell (Notre Dame), John Green (Akron), and Quin Monson (BYU) have a new book on Mormons in American politics. Seeking the Promised Land is comprehensive look at Mormon politics that gives us a picture of how the typical LDS member thinks about politics.

Here are my five takeaways from this book, five ways that Mormons are a “peculiar people” in American politics. 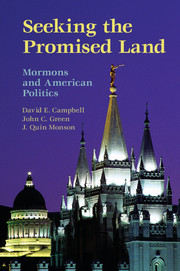 1. Mormons were once public enemy #1 of Republicans

When the Republican Party drafted its first party platform in 1856, it included a resolution calling on Congress “to prohibit in the Territories those twin relics of barbarism — Polygamy, and Slavery.” That’s right. Slavery wasn’t the only great evil to be eradicated. So too was polygamy, which was practiced by Mormons at the time.

During the Republican dominance of national politics after the Civil War, Mormons were virtually kept out of national politics. It was only after the LDS changed its position on polygamy that Utah was granted statehood. The Utah Constitution included a clause outlawing the practice: “polygamous or plural marriages are forever prohibited.”

Mormons’ partisanship after statehood could be described as bipartisan. It was not until the 1970s that Mormons moved solidly into the Republican camp.

2. Today, Mormons are the most Republican of any faith

Forget evangelicals — when it comes to religion & politics, no religious group is more solidly Republican than Mormons.

In 1960s, only about a third of Mormons identified themselves as Republican. Recent polls have the percentage around sixty percent. A 2014 survey by Pew has the figure at 70 percent. And many of those who don’t see themselves as being Republican still vote for the GOP on Election Day. For example, in recent elections Mormons in Utah have voted Republican 30 points higher than the national average. In 2012, nearly 90 percent of Mormon voters in Utah voted for Mitt Romney.

This plan included the U.S. Constitution and Bill of Rights. In Doctrine and Covenants (part of the LDS cannon), God says,

And for this purpose have I established the Constitution of this land, by the hands of wise men whom I raised up unto this very purpose, and redeemed the land by the shedding of blood.

4. Mormons are politically conservative, with a twist

If you gave the typical Mormon a quiz on being a conservative, he or she would ace it. Socially conservative mixed with the small government views of the Mountain West, most Mormons hold conservative positions on the major issues of the day.

5. Mormons aren’t always political, but when they are, they can be successful

Like other faiths, the LDS is a religious organization first, not a political one. As a religious group, Mormons are rarely mobilized into politics, but when they are often successful. Few Mormons report hearing about politics in their wards (local congregations). Polls show that it is rare for a Mormons to have politics mentioned in a sacramental meeting (Sunday service) or teaching.

But on rare occasion, such as the fight over California’s Proposition 8 campaign, Mormons can be politicized. Campbell and his colleagues describe Mormons as being like dry kindling. They aren’t always on fire (politically) but they have all that’s needed to burst into flame. They are highly organized, politically homogenous, and hold strong beliefs. When the church takes a clear stand on an issue, Mormons are able to organize politically and be successful.