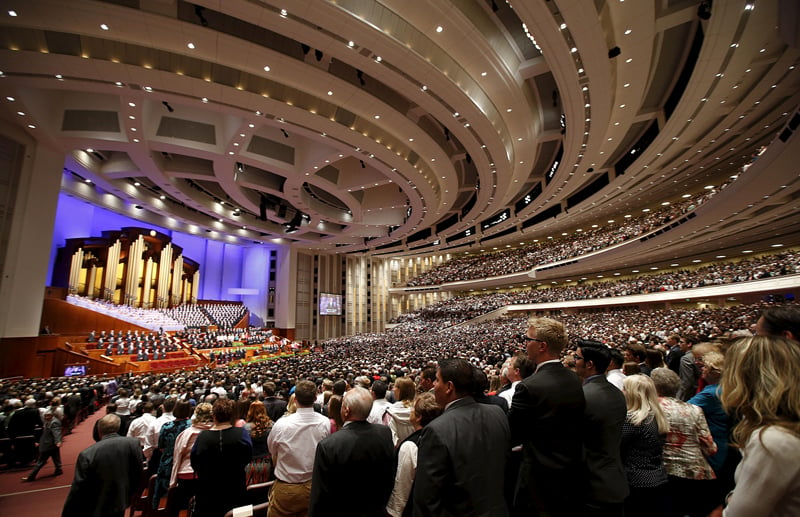 The Mormon Tabernacle Choir and conference goers sing at the first session of the The Church of Jesus Christ of Latter-day Saints’ 185th Annual General Conference in Salt Lake City, Utah April 4, 2015. Photo courtesy of REUTERS/George Frey
*Editors: This photo may only be republished with RNS-MORMON-GOP, originally transmitted on April 8, 2015.

So says a study released Tuesday (April 7) by the Pew Research Center, based on more than 25,000 survey interviews conducted nationwide in 2014.

The survey shows that 70 percent of Mormons lean Republican, compared with just 22 percent who tilt Democratic. That 48-point gap is greater for the GOP than margins provided by any other single group.

Behind Mormons in GOP support are white evangelical Protestants, who give the party a 46-point edge; white Southerners, a 21-point GOP advantage; white men with some college education or less, also 21 points; whites, 9 points; and the “silent generation,” ages 69 to 86, 4 points.

Groups that lean Democratic most heavily are blacks, who give that party a 69-point edge; Asians, a 42-point margin; religiously unaffiliated, 36 points; post-graduate women, 35 points; Jews, 30 percent; Hispanics, 30 points; and the millennial generation, ages 18 to 33, 16 points.

“Obviously, Mormons are one of the strongest groups for Republicans, right on par with white evangelicals. Both groups are about three times as likely to lean towards the Republican Party,” Jocelyn Kiley, associate director of the Pew Research Center, said. “That’s been the case for a long time.”

She noted that Pew did a large survey of Mormons in America in 2012 and found then that about three-quarters of Latter-day Saints in the West are Republican, compared to about two-thirds of them in other areas. “Mormons are a strong Republican group, no matter what subgroup of Mormons you look at.”

No other religious group identifies so strongly with one party, although some come close.

“The Pew report isn’t surprising. Mormons have been heavily Republican for quite some time,” said Quin Monson, a political science professor at LDS Church-owned Brigham Young University. “What is surprising is they have been getting more Republican in recent years in terms of their voting behavior,” especially because of Mitt Romney’s 2012 White House run. (Romney became the first Mormon to win a major-party presidential nomination.)

Monson co-wrote a 2014 book, “Seeking the Promised Land — Mormons and American Politics,” which examines why members of The Church of Jesus Christ of Latter-day Saints are so heavily Republican.

“It’s something that’s been building for decades,” he said Tuesday. “What the church has chosen to speak out on and emphasize also happens to be largely consistent with what Republican politicians and the Republican Party have been saying.”

As an institution, the Utah-based LDS Church remains neutral in partisan politics. “The church’s mission is to preach the gospel of Jesus Christ,” it says on its website, “not to elect politicians.”