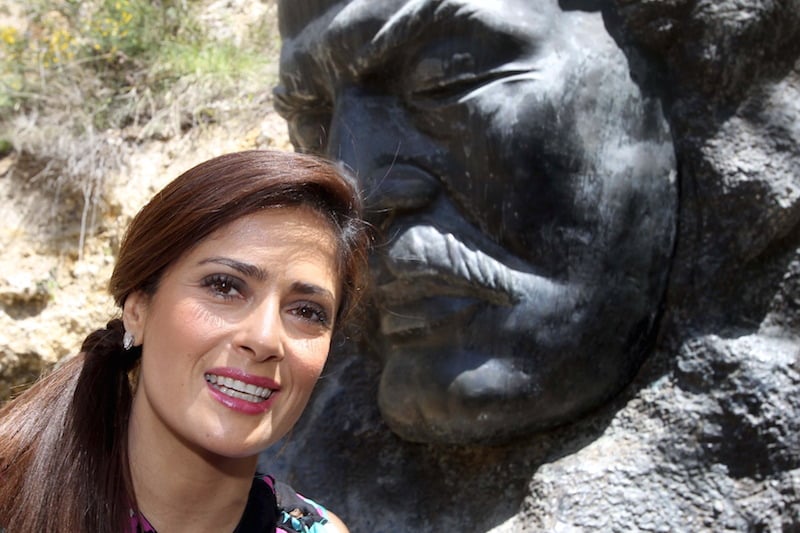 Actress Salma Hayek stands near a statue of late writer Khalil Gibran during a visit to promote her film “The Prophet” in Gibran’s hometown of Bcharre, Lebanon. REUTERS/Stringer

BEIRUT (Reuters) — Movie star Salma Hayek said on Monday her new film The Prophet was a labor of love that helped her explore her relationship with her late Lebanese grandfather who adored the book that inspired it.

The animated film, which draws on the 1923 book by Lebanese-born writer Kahlil Gibran, tells the story of Almitra, a headstrong girl who forms a friendship with the imprisoned poet Mustafa, voiced by actor Liam Neeson.

Mexican-American actress Hayek co-produced the film and does the voice-over for Almitra’s mother, Kamila. The story unfolds in an imaginary coastal city and explores Gibran’s themes of love and spirituality.

“For me this is a love letter to my heritage.”

Hayek visited Gibran’s birthplace, Bcharre village, in northern Lebanon on Sunday to pay tribute to the writer and his book, a series of poetic essays written in English, which has sold more than 100 million copies worldwide.

She said she hoped the film, which she wanted to be accessible to children, would give a global audience a taste of literature from a Middle Eastern author.

“There is an Arabic writer who wrote philosophy and poetry and who brought all religions and all the world together,” she said.

In the film, written and directed by Lion King director Roger Allers, Mustafa is locked away for his poetry which is deemed dangerous and rebellious.

He explains to Almitra how he escapes his imprisonment through his mind. “My words are my wings,” he says.

Hayek says she was inspired by Gibran’s mother who shares the name of her character Kamila. After an unhappy marriage Kamila moved to the United States and worked selling cloth to provide for her four children.

“Because of her courage Kahlil Gibran was inspired to be the man that he became,” Hayek said.

She cited this example and criticised Lebanese law which prevents women passing on their nationality to their children, appealing for a change in policy.

“Our blood is as good as a man’s blood and we carry them in our wombs, so (the blood) is even more ours than anyone else,” she said. “We should be able to pass on our heritage to our children.” (Reporting bySylvia Westall; editing by Louise Ireland)

News
How Amy Coney Barrett could change the Supreme Court’s balance on religious liberty
© Copyright 2020, Religion News Service. All rights reserved. Use of and/or registration on any portion of this site constitutes acceptance of our User Agreement and Privacy Policy, Privacy Statement and Cookie Notice. The material on this site may not be reproduced, distributed, transmitted, cached or otherwise used, except with the prior written permission of Religion News Service.