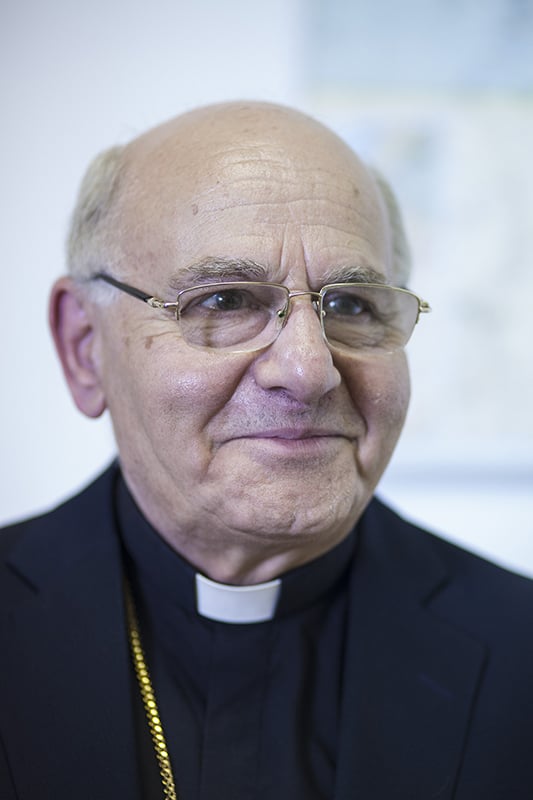 Greek-Catholic Archbishop Jean-Clément Jeanbart of Aleppo, Syria, during a visit at ACN International Headquarters on July 15, 2014. Photo by Reinhard Backes, courtesy of Aid to the Church in Need

NEW YORK (RNS) In the weeks leading up to Easter, Archbishop Jean-Clement Jeanbart of Aleppo was starting to sense, finally, that the war that had ravaged Syria since 2011 was finally beginning to ease.

He launched an effort to promote rebuilding and to keep some of the younger generation of Christians in Aleppo, a religiously diverse city of 3 million near the Turkish border that had been the country’s commercial hub.

Then, on Easter weekend, another round of fighting erupted, targeting the Christian quarter of the city and killing and injuring dozens. Three churches and several apartment buildings were destroyed and rockets hit Jeanbart’s own offices, which sit less than 200 yards from the Old City, where the rebels are based.

The archbishop spent the next week looking for someplace to bury the bodies of a family of four since the Catholic cemetery was now a battle zone.

“I was without any words to say to my people,” the prelate said in an interview as he prepared to celebrate an evening prayer service at the Church of the Virgin Mary in Brooklyn, one stop on a 10-day tour of the U.S. that ends on Friday (May 1).

It was a grim moment, a low point even amid the horror of the civil strife that has devastated Syria, and in particular the country’s ancient Christian minority.

Jeanbart heads the Melkite Greek Catholic Church in Aleppo, an Eastern Catholic rite that is in full communion with Rome, but one that is in serious peril.

Just a few decades ago, Aleppo was home to about 170,000 Catholics, about a third of the city’s population. Since the war broke out, Jeanbart has seen a third of his flock reduced by death, dislocation and emigration while Aleppo’s Muslim population has soared. 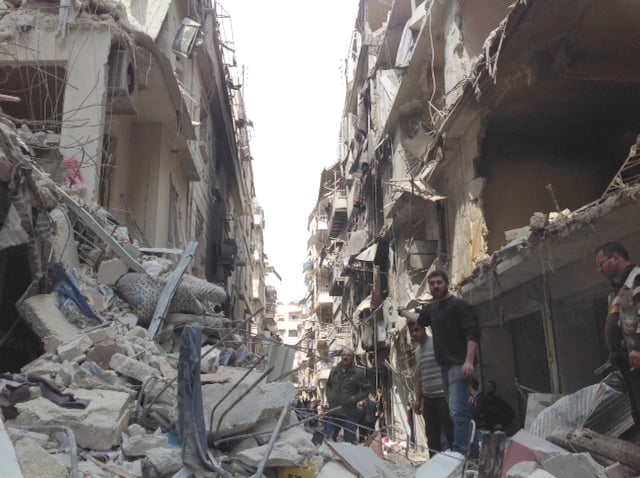 Damage in the Christian quarter of Aleppo. Photo courtesy of the Melkite Catholic Archdiocese of Aleppo

The threat of annihilation is constant, as Aleppo has become the main battleground between the government forces of President Bashar Assad and a motley assortment of rebels who include growing numbers of fighters affiliated with the fundamentalist terrorism of the Islamic State group.

Militants from the Islamic State have killed or kidnapped priests; the tires on Jeanbart’s own car were shot out in an attack as he traveled to Beirut. Two Eastern Orthodox bishops were captured two years ago and there has been no word on their condition. Snipers, shelling, lootings and car bombings are a part of the daily gantlet Christians run if they leave their homes. “A country of blood and fire,” he calls it.

That’s why the Catholic relief agency Aid to the Church in Need brought Jeanbart to the U.S. — to raise awareness about the seriousness of their plight and to raise money to help rebuild the community.

“We are in grave danger; we may disappear soon,” as Jeanbart told an audience in Manhattan on Tuesday (April 28). He began his tour in Boston and was headed to Washington, speaking to church groups but also doing numerous media and television interviews to get the word out.

Yet the archbishop knows he has a host of forces arrayed against him, and not just on the battlefield:

“I know the American people have values and like freedom and like justice, so I thought they would listen, would give an ear to the other communities in the region — particularly the Christians, who are forgotten,” said Jeanbart, 72 and yet still energetic after a long day of interviews and little sleep. 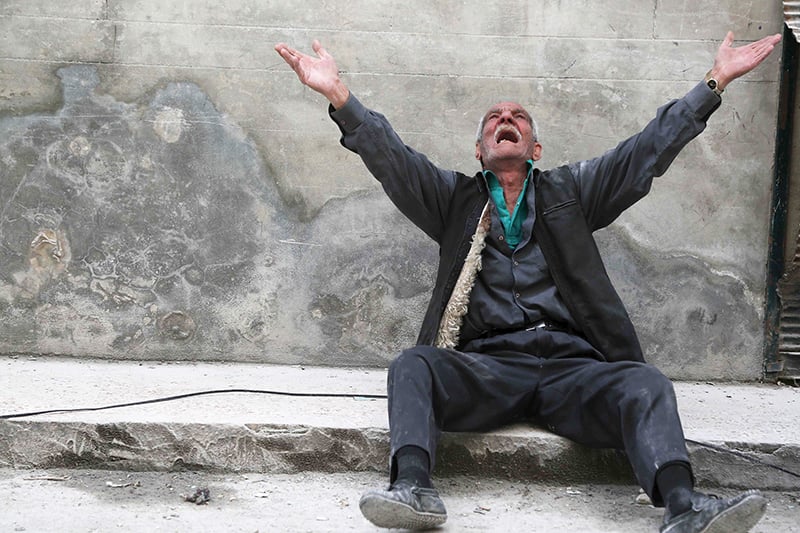 A man reacts at a site hit by what activists say was a barrel bomb dropped by forces loyal to Syria’s President Bashar Assad, in Aleppo’s al-Fardous district on April 29, 2015. Photo courtesy of REUTERS/Hosam Katan
*Editors: This photo may only be republished with RNS-SYRIA-BISHOP, originally transmitted on April 29, 2015.

But Jeanbart faces another challenge when he speaks to an American audience: For him, as for other Syrian Christians, Assad is not the despot that he is considered in Washington.

Christians in Syria felt protected by Assad, he said, much as Christians in Iraq were under Saddam Hussein. Many on Capitol Hill, however, want to send more arms and funding to the rebels and remove Assad, who has been accused of using chemical weapons as well as being a serial violator of human rights.

“It’s up to them (the Americans) whether to like him or not,” Jeanbart said of Assad. “But I’m afraid they don’t know him enough. He’s not an angel. He will not be canonized tomorrow. But he’s not bad. Compared to the other Arab leaders, he may be one of the best.”

Assad is under growing pressure from the rebels and the Islamic State, and if Assad falls, Jeanbart fears that the ensuing chaos — like that in Libya and Iraq — may sound the death knell for a Christian community that predates even the conversion of the Apostle Paul.

“As a successor to the apostles I feel a responsibility, a duty, to do what I can,” he said. “I don’t want, in my time, that this church might disappear. We are all responsible” — pointing to Christians in the West — “for the continuity of the church in this land that has been blessed and sanctified by the blood of millions of martyrs who since the beginning have been killed because they were Christians.”