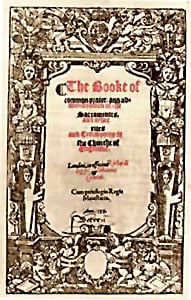 1559 edition of the Book of Common Prayer

The classic rationale for marriage in the Anglo-American tradition can be found in the vow prescribed by the 1559 Book of Common Prayer, which gives three "causes for the which matrimony was ordeined" by God; to wit: the procreation and nurture of children; a remedy against the sin of fornication; and "for the mutual societie, helpe, and comfort, that the one ought to have of the other, bothe in prosperity and adversitye." Arguing in favor of allowing states to limit marriage to one man and one woman before the Supreme Court yesterday, Michigan solicitor general John Bursch put all his eggs in basket one.

In order to keep the Court from declaring marriage a constitutional right for same-sex couples, Bursch claimed that all he needed to show was that his state has a "rational basis" for its one-man-one-woman restriction, which is to encourage the linkage between parents and their biological children. Because "when you change the definition of marriage to delinkthe idea that we're binding children with their biological mom and dad, that has consequences."

"Rational basis" is a low bar to get over, and it's pretty clear that Bursch's pitch will be sufficient for three or four of the justices. Nevertheless, it does require demonstrating that there's nothing arbitrary about thus privileging one-man-one-woman marriage. That takes some doing.

For example, one might ask why, if Michigan is interested in having children grow up in a family with both biological parents, it makes it so easy for married couples with biological children to get divorced. And why not encourage marriages of any kind so long as there's one biological parent? And then there's the linkage between children and their adoptive parents. Shouldn't that be encouraged? Anywhere you turn in the "best interests of the child" direction, there are benefits of same-sex marriage staring you in the face.

Moreover, given that children are the focus of the state's marital concern, Justice Kagan asked Bursch, would it be constitutional for the state to ask a couple of any kind whether they intend to have any. "I think it would be an unconstitutional invasion of privacy to ask the question," he replied. The point of his argument was not that the state make procreation and children-rearing a criterion for the marital state, but that it's consequential to hold out the image of marriage as a procreative, child-nurturing institution as a Platonic ideal.

Speaking for the other side, Portland, Me. attorney Mary Bonauto called this argument "beyond attenuated." It also, she said, embodied "an impoverished view of what is marriage." Certainly it embodied a limited view of the state's interest in marriage. As Bursch put it, "[T]he State doesn't have an interest in love and emotion at all."

Personally, I'm inclined to disagree. When it comes to the health of society, love and emotion, otherwise known as "mutual societie, helpe, and comfort...both in prosperity and adversitye," have consequences. The state has an interest in those consequences. To think otherwise would be irrational.