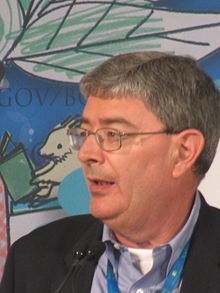 Imagine for a moment that you are George Weigel, Authorized Biographer of St. John Paul II, Apostle of Catholic Evangelicalism…uh, make that Evangelical Catholicism, and John M. Olin Professor of Religion and the Spirit of Capitalism at the Ethics and Public Policy Center on M Street in Washington, D.C. The word has gotten around that the current pope, the ever-so-worrisome Francis, is about to issue an encyclical on climate change — an encyclical these days being, according to the ultra-orthodox New Advent encyclopedia, how “the most important utterances of the Holy See have been given to the world.”

To wit, it’ll be an expression of the papal magisterium just one step short of an Apostolic Constitution. Yikes!

Panic is building among your like-minded friends, Catholic and otherwise. That man in Rome has more moral authority today than Jesus Christ Himself. Sure, you expect him to follow his namesake and hug a tree every now and then, but it’s something else to join forces with the Worshipers of Gaia and call into question the Divine Right of Capital to work its will upon the earth. How to keep any such message from getting through?

You know you can never win by a direct assault on a sitting pope, especially if you sit to his right, especially if he’s this popular. No, you’ve got to take him down carefully, subtly, all’italiana. Back in 2009, when Pope Benedict issued his social encyclical Caritas in Veritate, you were clever enough to use a gold marker to identify the “obviously Benedictine” passages emphasizing “abortion, euthanasia, embryo-destructive stem-cell research,” and a red marker to indicate the “current Justice and Peace default positions.” The point being that lefties in the Vatican had smuggled in the bad stuff behind the back of the elderly pontiff. Ergo: a “duck-billed platypus” of an encyclical!

This time, something more, well, complicated and preemptive must be undertaken. So you start with a parable from the late first century: In the 24/7 news cycle of inside-the-Beltway Jerusalem, fractious Christians have become obsessed with Jesus’ position on the anti-Roman Zealots — such that the big debate over the new Gospel of Luke has to do with the identification of one of the disciples as “Simon, who was called the Zealot.” And they miss the whole point of the Gospel! In other words, 21st-century folks, nothing could be less important to the pope’s main concerns than climate change.

Okay, Okay. It’s an Encyclical. On. Climate. Change. But then you point out that the whole thing’s been ginned up by a self-promoting “third-tier Vatican official with a taste for gauchiste (that’s leftist) politics” who succeeded in getting the anti-Catholic Guardian to puff the prospect of a big global warming pronunciamento from the pontiff.  And, as the “inept Vatican press operation” stood idly by, the self-same bureaucrat staged a pre-encyclical climate change conference that defied the pope’s own stated wish for open discussion by excluding your pals from the climate-change-denying Heartland Institute.

As for papal environmentalism, what’s the big deal anyway? JPII and Benedict already said everything that Catholicism has to say on the subject. There’s no reason to think the current occupant of the See of Peter is about to offer “some sort of radically new departure in the list of subjects addressed by the papal magisterium.” It’ll be climate change without the science, embedded in a critique of today’s (lamentable) public moral culture — in other words, a “far more interesting context than that set by Ban Ki-moon, the U.N. bureaucracy, and the global-warming industry.”

The danger, of course, is that “the pope’s principal moral message is going to get lost in the spin cycle.” But until the pope gets around to reforming that inept Vatican press operation, at least you’ll be there to spin it through. Praise the Lord!