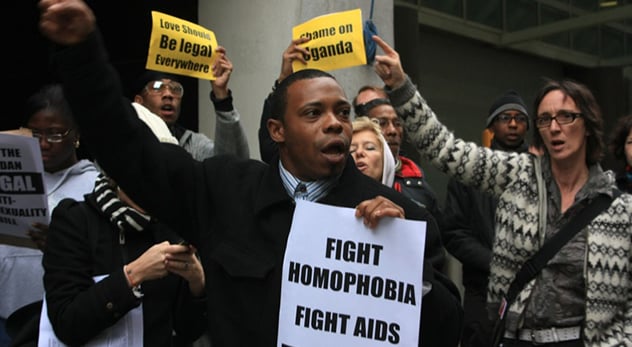 Which nations exactly are we supposed to be emulating—the ones that flog lesbians or the ones that execute gay men? (“Uganda Action” protest – Image courtesy: Kaytee Riek – http://bit.ly/1F9YK4N)

In a closed-door meeting with Christian leaders last year, a man who’s something of hero of mine stood to make the case on why we must resist the rising tide of LGBT rights. He read what seemed like an approved checklist of talking points peppered with traditional interpretations of relevant biblical passages and sociological data. His arguments, though well trod, were sincere.

But just before he concluded, my friend added a new appeal: Americans should listen to non-Western Christians on the matter. The faithful in many countries have held the line on traditional understandings of sexuality and marriage, and it would be arrogant for progressive Americans to ignore their brothers and sisters’ perspectives.

But if religious conservatives are truly awakening to the need to dialogue with global Christians, then let them be unchanging. It is inconsistent to exploit non-Western perspectives on LGBT rights but refuse to hear those same voices on matters such as nation building, the waging of imperialistic wars, immigration, environmental policy, and foreign aid. The inconsistency here leads me to believe that these calls are more about political posturing than a desire to really listen to our global brothers and sisters.

My friend is only one of many making these kinds of arguments. Ron Sider, author of the classic book Rich Christians in an Age of Hunger, argued in Christianity Today that Christians should listen “to the vast majority of contemporary Christians (who now live in the global South)” on LGBT issues. Christian blogger Trevin Wax says he hopes the Supreme Court “will handle same-sex marriage like other nations have.” Wax adds that only 17 countries that belong to the United Nations have changed their laws to allow for same-sex unions.

But what Sider and Wax fail to present is exactly how foreign nations have handled LGBT rights. They do not disclose, for example that in seven countries, those convicted of homosexual acts can be executed, often by hanging or stoning. And they make no mention of the approximately 70 countries in which LGBT persons can be imprisoned for years or even for life.

Here are a few highlights (or lowlights, as it were) of the nations that some religious conservatives hope Americans will take cues from:

Which nations exactly are we supposed to be emulating—the ones that flog lesbians or the ones that execute gay men?

Wax and Sider may not be aware of the laws in these countries, but other Christians making similar arguments cannot claim ignorance. Matthew Staver of The Liberty Counsel has praised foreign nations that punish homosexuality. Staver’s organization defended Christian activist Scott Lively who was sued for his involvement in promoting a law in Uganda that would have allowed those convicted of “aggravated homosexuality” to be executed. Lively claims his greatest success has been bolstering a law in Russia that outlawed “homosexual propaganda.” The Economist reported that Alliance Defending Freedom, a religious legal advocacy group working in 31 countries, supported a coalition of churches fighting to keep homosexual sex criminalized in Belize. Foreign offshoots of the American Center for Law and Justice, a group founded by televangelist Pat Robertson, have fought against protections for LGBT persons in Kenya and Zimbabwe. And the Family Research Council spent $25,000 lobbying Congress to tone down the language in a bipartisan resolution condemning Uganda’s anti-gay bill.

So Western missionaries, activists, and political organizations have invested money and manpower to impose their thinking on foreign nations, and then those same people and organizations are calling for us to model this thinking. What they seemingly fail to realize is that the “perspectives of the Global South” are often the imposed perspectives of the Global North. Sometimes when we think we are listening to “them,” we may only be hearing the echoes of our own voices.

But engaging with different perspectives is positive–essential even. Considering the problematic policies that Americans have helped create, how would we even begin to engage with our global neighbors?

According to Soong-Chan Rah, professor at North Park Theological Seminary and author of The Next Evangelicalism: Freeing the Church from Western Cultural Captivity, the way to remedy this is to promote two-way conversations. It must be dialogue, not monologue.

“Part of the problem in the past is that it has been one-directional,” Rah says. “If we’re going to be listening to the Global South, it needs to be mutual and reciprocal.”

A posture of healthy dialogue also requires consistency—open engagement on all matters. This means that conservatives—the ones who often trumpet American exceptionalism and resist international consultation through bodies like the United Nations—will need to alter their own thinking and behaviors. They can no longer refuse to consult other nations except when it is politically expedient.

“To make a blanket statement that we should follow the Global South only on one particular matter actually dishonors them,” Rah says. “If we’re picking and choosing when to listen, we’re not actually listening. We’re just using them to suit our purposes.”

Is this what religious conservatives want? To give our global neighbors a permanent seat at the table and an ongoing voice in discussions about American policy? To agree to do more than use our brothers and sisters when it suits us? To begin honoring, rather than dictating, their perspectives?