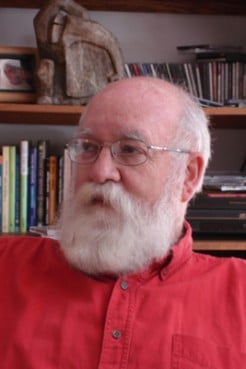 (RNS) A prominent philosopher-scientist has pulled out of a popular public science forum over concerns about one of its funders, the John Templeton Foundation.

The John Templeton Foundation, named for Sir John Templeton, a British-American businessman and philanthropist who died in 2008, funds numerous projects centered on creativity, love, freedom and gratitude. It focuses on what it calls “Science and the Big Questions,” and has regularly sponsored projects that investigate links between science and religion.

Dennett said he objects to Templeton sponsorship because he finds some of the projects they fund scientifically questionable. He is one of several scientists and philosophers who have refused to take Templeton money in the past, including physicist Sean Carroll and philosopher Massimo Pigliucci.

In a 2013 article in Slate, Carroll wrote: “Any time respectable scientists take money from Templeton, they lend their respectability — even if only implicitly — to the idea that science and religion are just different paths to the same ultimate truth. That’s not something I want to do.”

For Dennett, the issues were a bit different.

“I would be very happy to have the Templeton Foundation sponsor research on religion and science,” he said in a phone interview from Spain, where he is lecturing. “But what they are doing now is sponsoring some very fine science with no strings attached and then using their sponsorship of that to try and win prestige for other projects that are not in the same league.”

He pointed specifically to the Darwin Festival held in Cambridge, England, in 2009, which was also funded in part by Templeton. He wrote that some of the presentations there were “full of earnest gobbledegook.”

“I compare it to an art collector who spends a lot of money on excellent art and then has a show with a few pieces by his brother,” Dennett said this week. “It’s trying to elevate the prestige of his brother by having them in the same room with a Cezanne and a Monet.”

Dennett is also a famous atheist, one of the so-called “four horsemen” of the New Atheists, which include Richard Dawkins, Sam Harris and the late Christopher Hitchens.

“It’s not so much that it endangers the objectivity of the conference,” he said of Templeton’s sponsorship. “It’s that I have made it clear that I am not going to take Templeton money until they change their policies about what they fund and how they fund.”

Dennett said he has raised his concerns with Templeton leaders in the past and they have made some changes. He said they used to require that fund recipients include input from theologians, and they no longer do that — “to their credit.” He said he did not know of Templeton’s funding of the event he was to appear at in New York until recently.

Earl Whipple, vice president of communications and public affairs for Templeton, said the organization invests in individuals with “an attitude of humility and open-mindedness.”

“Discoveries often result from competing ideas, rigorous scholarship, and civil dialogue, not from the inhibition or limitation of debate,” he said.