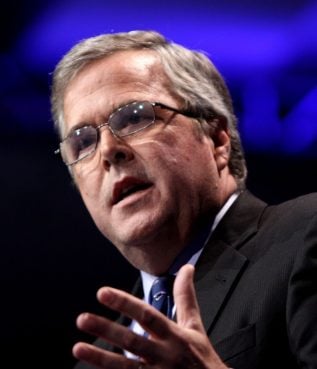 LYNCHBURG, Va. (Reuters) Republican Jeb Bush sought to bolster his support among evangelical Christians on Saturday (May 9) in remarks at a Christian university, accusing liberals of trying to undermine religious freedom.

The potential presidential candidate in the November 2016 election gave the commencement speech to 34,000 people in the football stadium at Liberty University, a school founded by evangelical leader Jerry Falwell.

The former Florida governor, who is competing with a variety of Republican rivals for support from the Christian right, cited a series of cases that, he said, showed religious freedom was under assault and considered by some to be an “obstacle to enlightened thought.”

One was an attempt by President Barack Obama’s administration to require businesses to include contraception coverage in their employees’ health insurance as part of Obama’s signature healthcare law.

The decision was challenged in court by two companies owned by Christian families who felt that providing contraception violated their religious beliefs. The Supreme Court ruled in favor of the businesses last June in a case known as Burwell v. Hobby Lobby.

“The progressive political agenda is ready for its next great leap forward, and religious people or churches are getting in the way. Our friends on the Left like to view themselves as the agents of change and reform, and you and I are supposed to just get with the program,” Bush said.

Another example he cited was a subpoena sent to five pastors last year by the city of Houston asking them to turn over speeches or sermons related to Houston’s non-discrimination ordinance. After an outcry, the city dropped the subpoenas.

He said “fashionable opinion” has a problem with Christians and the only proper response is “a forthright defense” of the constitutional right to freedom of religion.

Bush’s appearance allowed him to demonstrate to evangelicals his deeply held Catholic faith and reiterate his opposition to abortion.

He is held in suspicion by some conservatives, evangelicals included, for moderate positions on immigration reform and Common Core national education standards.

“His father used to be president, and then his brother became president. Somehow, I don’t know what it was, we really hit it off,” Bush chuckled.